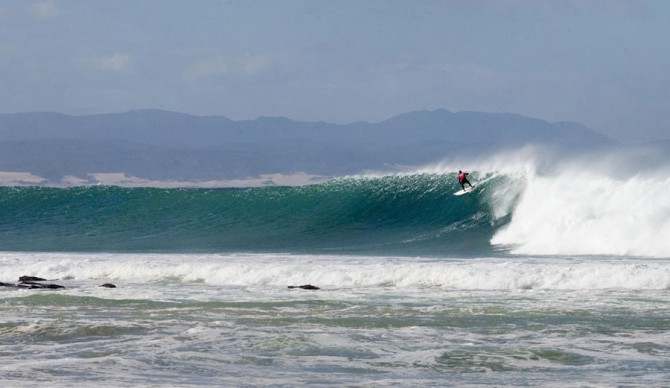 Jeffreys Bay. This is what the Dream Tour looks like. Photo: ASP/Cestari

The 2017 edition of the JBay Winterfest will be another great year for the annual sports and beach festival, with much in store for visitors and competitors alike. Everybody’s familiar with the headlining event, the WSL’s Corona Open JBay, but you may not have heard about all of the opening acts. From the Corona Open trials (JBU Supertrial), to a trail run, to a kite festival, and even a fishing competition, this is truly a well-rounded festival.

The precursor to it all is the JBU Supertrial surfing event. It is the trials competition for the annual ‘CT event. The JBU Supertrial has a waiting period from 1 -12 June with the winner getting a wild card slot into the main World Surf League contest. With only 12 surfers and a fresh format, the JBU Supertrial is focusing on surfers who wish to pursue a professional surfing career and contest organizers have invited younger surfers into the fold.

The main draw of the JBay Winterfest is the World Surf League’s Championship Tour contest. This tournament is the only Championship Tour competition in the country, with past champions Mick Fanning, Kelly Slater, Jordy Smith, and the rest of the ‘CT roster competing. Another highlight of the JBay Winterfest is the Oakley X-Over, the celebrity crossover tournament that takes place every year. Top sporting celebrities like Butch James, Greg Minnaar, Ryan Sandes, and the Springbok Captain contingent of Bob Skinstad, Schalk Burger, John Smit and Jean de Villiers will all compete in the Golf, Mountain Bike and Surf disciplines for the chance to be the 2017 Oakley X-Over champion. Last year, Raynard Tissink was the event champion, with Australian wild card Tom Whitaker runner-up. Greg Minnaar and Butch James came third and fourth respectively.

Other happenings at the JBay Winterfest 2017 include the JBay Windfarm MTB Classic, the Cold Water Swim Classic, the Endurade JBay X Trail Run, a Kite Festival, a Skins Fishing comp, a Funduro and more.

Note: You can learn more at www.jbaywinterfest.com, and find JBay Winterfest on Instagram here.