The Definitive, Gnarliest, Most Comprehensive (and Honest) Wavestorm Buyer’s Guide Ever 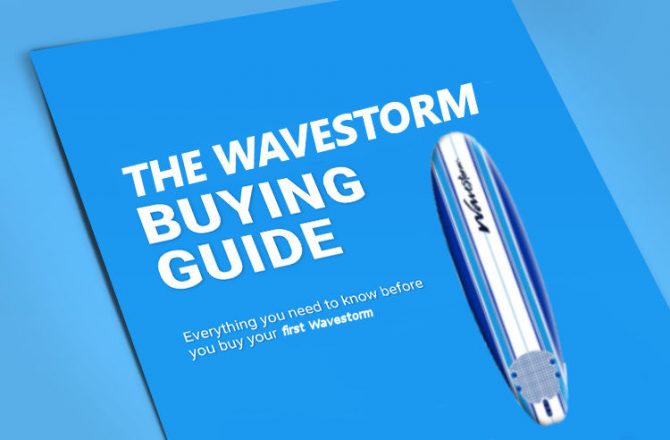 This decision will shape the rest of your life. Don’t take it lightly.

So, you’ve decided to take up surfing? Congratulations! Surfing is an exquisite hobby choice. You are about to embark down a radical path filled with gnarly aerial maneuvers, dizzying spins, and massive hacks that send gobs of spray onto nearby onlookers. I am sure that you are already imagining how you could go pro and redefine the sport. But before you set out on a quest to knock Slater off of his public transportation-powered mountain in Lemoore, you need to learn how to actually, you know, surf.

Because you are reading this, I can tell you are an intelligent person. A good habit smart people employ is gathering all the correct and necessary information available before making a decision. You most likely already visited multiple surf forums, read many informative articles, and maybe talked to an actual human being or two about the best board for a person in your position: the beginner surfer. Unless they are absolute morons, they have all told you to purchase a Wavestorm. Do note that some morons are capable of handing out quality surf advice.

The Wavestorm is the perfect board for a beginner to learn on. Their size makes paddling, catching waves, and balancing much easier than a smaller board, while their foamy construction keeps each session safe for both you and those around you. Regardless of what your first board is, you WILL fall off of it in embarrassing fashion. So it’s best to make sure the only thing harmed in this process is your pride.

Years ago, buying a Wavestorm was simple: drive to Costco, pick up a fresh blue one, and head straight to the beach to squeak around. Nowadays there are a variety of styles available. Which should you choose? What are the differences? And is the answer simply Go for the Rasta? 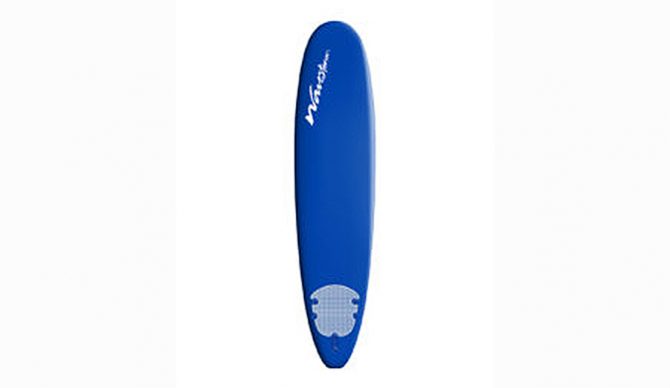 An oldie but a goodie, never underestimate the value of a classic. Photo: Wavestorm

Taking the first Wavestorm model on the market out for a spin is a lot like wearing your Grandfather’s Old Spice Classic cologne. Others may not enjoy it but damn do they respect it. It’s a board that has launched the shredding careers of countless kooks. It has also quite literally launched more people into the water than any other. Your chances of seeing the OG in today’s lineups are high, a testament to the quality and craftsmanship of the board’s master shaper, Wav E. Storm. It may not be the flashiest purchase, but it will keep you in the water for years to come.

The Blue and White 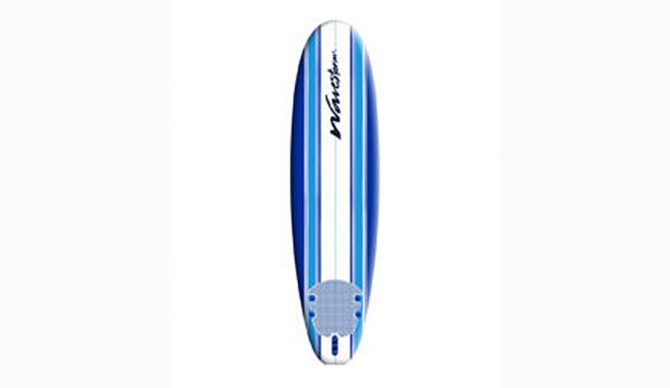 Here we see the first signs of innovation starting to take hold. Wanting to stay true to his roots while experimenting with the design, Wav took everything we loved about the original eight-foot board (buoyancy, the color blue, enough volume to run over a family of four) and squashed it down into a seven-foot frame. The result is a board that provides more maneuverability without sacrificing flotation. But you won’t recognize any of that as you mow down hordes of strangers with your inability to turn. Just be aware that as you progress, this board can turn quicker than other Wavestorms, allowing you to steamroll innocent bystanders in all directions.

This now-vintage-but-still-relevant blue and white is like wearing a sport coat for a night out. Your surfing will look smart and sophisticated, even as your board tombstones and catapults you into the whitewater. The key to wiping out, as with most situations in life, is to remain calm and appear dignified while flailing helplessly into the void. Chicks dig that.

The Blue and Green 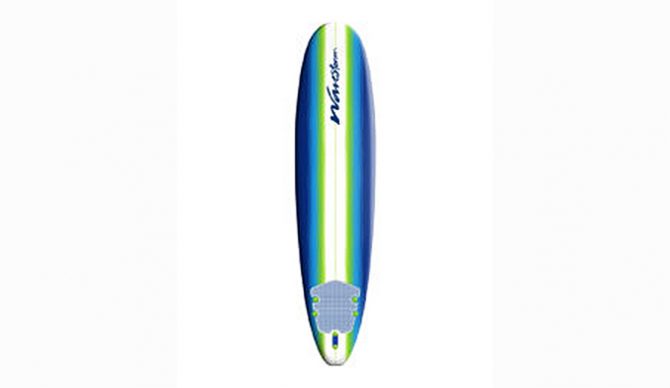 Do you live to get radical? Photo: Wavestorm

Ever wonder how the guys in the viral video “Floater” were able to pull off the effect of surfing invisible boards? Simple. They used this version of the Wavestorm. The blue and green stripes act as camouflage, allowing the board to blend in with the various water colorations around the globe.

Perfect for the budding magician in the family, the Blue and Green ‘Storm will amaze your friends with its ability to disappear in the water and then reappear as you wash up on the shore. As an added bonus, it will also teach you the basic mechanics of surfing.

The Blue and Orange 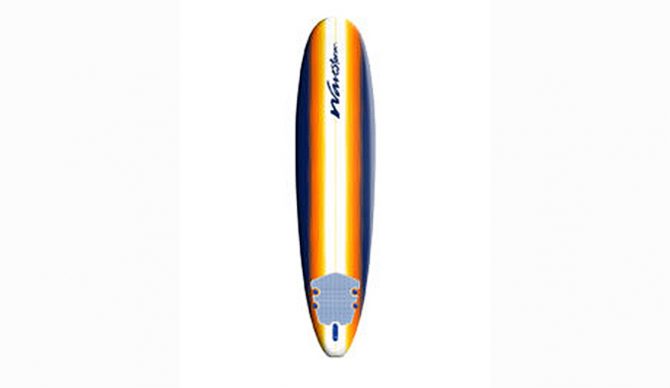 Google the words ‘surfable art’ and guess what pops up… Photo: Wavestorm

Few events feature more jaw-dropping beauty than a sunset over the ocean. Mixing the sun’s orange rays with the water’s blue hues, this Stormy ensnares one of nature’s finest moments and wraps it in squeaky foam.

While it is a functional watercraft, this is more art than it is equipment. If you have some extra cash floating around, I recommend purchasing some mounts and hanging this board on the wall. It makes for a great conversation piece and communicates to everyone setting foot in your home that you are a true surfer in tune with nature. 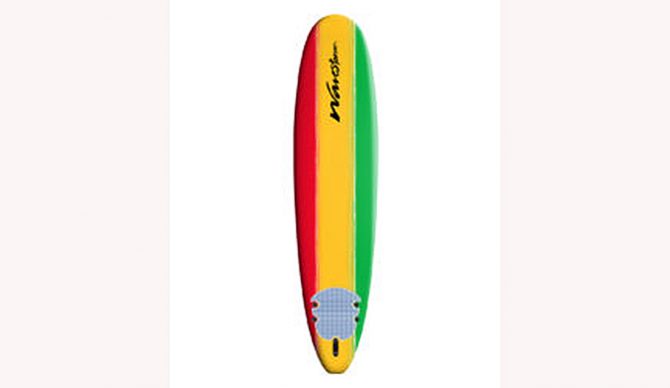 “This board is the equivalent of four bros riding in a topless Jeep Wrangler blasting Sublime, otherwise known as the Four Chads of the Apocalypse.” Photo: Wavestorm

At the intersection of surfing the sport and surfing the culture, you will find the Rasta Wavestorm. Finally, a board that exists for people that claim to love reggae, but actually only enjoy Shaggy, Sean Paul, and approximately two-and-a-half Bob Marley songs. Do not try to seek any deeper spiritual meanings here: this board is the equivalent of four bros riding in a topless Jeep Wrangler blasting Sublime, otherwise known as the Four Chads of the Apocalypse.

Look, I get it: most people want to learn to surf because it makes them look cool. They want to be a surfer without having to deal with the trials and tribulations that come with learning the sport. That’s why there are PacSuns in Idaho.

Telling someone at a party that you surf immediately conjures images of waking up at dawn to traverse a thick jungle in search of barreling head high waves at a remote surf break. You’re a badass by association.

Wav, in another moment of being in tune with the industry, harnessed this myth with the Rasta shred stick. This is the board that cries out, “Yeah bro, I surf.”

From a design standpoint, the magic of this board is, obviously, its Rasta design. Everyone knows that Rasta is scientifically proven to make you more chill and enviable, but most do not realize that Rasta rhymes with “fasta,” which translates from Rastafarian to “Faster” in English. This color scheme makes the board sit higher in the wave and feel lighter under your feet, causing an increase in speed down the line.

Point blank: This is the fastest board a Costco membership can buy. 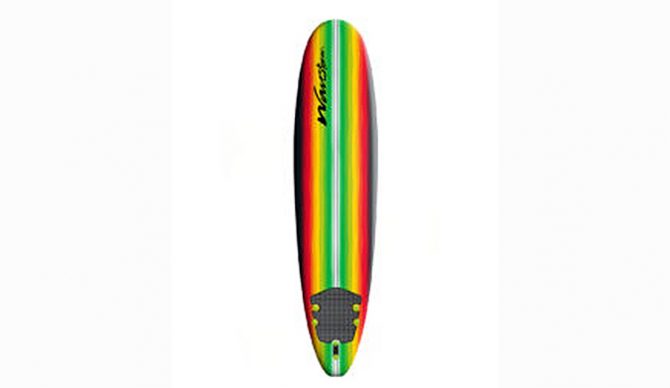 The Rasta Fade is perfect for burning someone and living to see another day. Photo: Wavestorm

As one of the more progressive shapes currently being mass-produced, the Rasta Fade has a lot of hype around it. Wav was able to blend the speed and chillness of the original Rasta design with the classic color template of the older Wavestorm models to create something as old as it is new.

This board demands to be surfed in an aggressive poo stance. It’s a great option for someone that can make it out into the lineup, catch unbroken waves, and routinely cut off five other guys before flying straight down the line. The great thing about this board is that the locals you just dropped in on will see the traditional Wavestorm color outline with the Rasta pattern and think, “Oh, this guy is super chill and clearly respects the hallowed history of the Wavestorm. Let’s cut him some slack.” The Rasta Fade is perfect for burning someone and living to see another day. 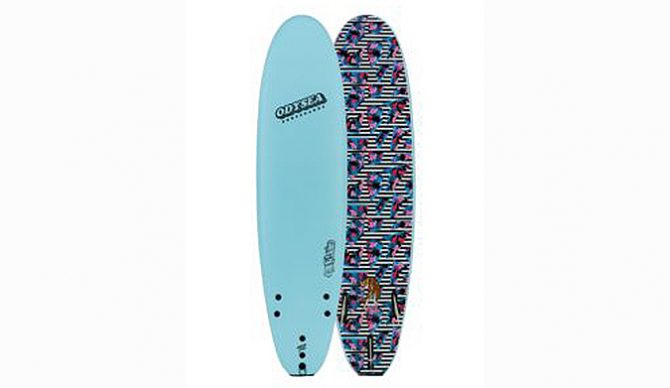 Ha! Nice try. I know a competing brand when I see one. Get that shit out of my face. Do not touch this unless a friend is offering to give it away for free. And if you do have a friend that is surfing an Odysea instead of a Wavestorm, you need to reevaluate your choice in friends.

It is important to select the Wavestorm that is right for you as the partnership between one’s self and one’s Storm is critical to your long-term surfing success. The choice you make today will ultimately define the surfer, and person, you become.

This purchase is the first chapter of your surfing journey. Yesterday, you were just another nameless face on the beach. But today, you will be admitted into the Cult of Storm (with proof of purchase): an elite group of foam boarders known the world over for laughing in the face of dangerous waves and overpriced foam. Welcome.

Dark clouds are beginning to form over the ocean. It looks like there is a storm of waves in the forecast. Now is the time to choose your foamy fighter. Do you have what it takes to shred the gnar?