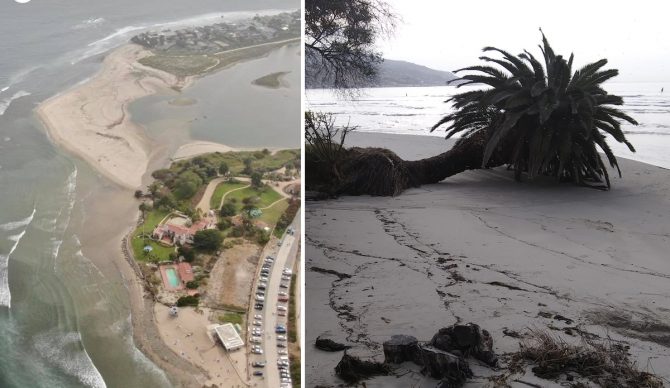 Surfrider Beach in Malibu has a new closeout section in the middle of First Point. Waves also now kiss the lifeguard stand at high tide, forcing the tower back further and further on the now-disappearing beach. The sand’s movement at First Point is also degrading the Adamson House, a California State Historical Landmark. A large 86-year-old palm tree fell over into the new flow stream last year, and another one will go soon. There has been systematic destruction to the area around the boathouse on the historic landmark built in 1929.

It’s no secret that the perfection of Malibu is fading away and may never be what it once was. So what happened?

The good intention of cleaning up and improving the estuary at the top of the point seemed successful when finished a few years back, but the latent effects now overshadow those positives. Surfers may be accused of being spoiled, as they are now unhappy with the loss of their perfect wave. The truth is that they’ll continue to surf it anyway.

The estuary makeover project altered the flow of the sand-bearing creek with a shift of the flow towards the pier to the ocean from the lagoon. This has clogged the cobble reef with a sand bar near the middle of the famed wave, spoiling its former perfection. The estuary upgrade also eliminated the historic sand flow around the point, causing erosion of the entire sand cell at the first, second, and even third point that make up Malibu’s Surfrider. 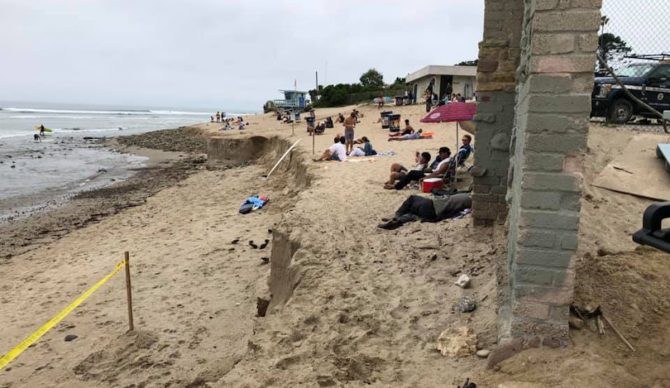 Plenty of beaches around the world are being eroded these days but Malibu’s is perhaps the most high profile right now. Some may assume it’s the new norm or the result of climate change. Malibu has its own direct local sand source with the creek from the Malibu Canyon that also unnaturally accommodates up to 5 million gallons of treated sewage a day way upstream along with the natural storm runoff. Now that the huge sediment season is over, it confirms that the cause of the sand-starved point is man-made. When the mass of the sediment was pushed out at the top of the lagoon in big rain years in the past, the natural down coast sand transport distributed this sediment evenly along the entire area to keep the sandy beach healthy despite many drought years in a row. All the good sand from the creek now covers part of the reef, hurting the wave’s quality. It then continues down the coast to Santa Monica while starving the historic beach.

If a simple trench is cut in the sand to redirect the flow back to its natural historic place it would be the start to repair the damage. But as of right now, that is a violation of the law. State Parks manages much of the property and according to one guide, it’s a crime if one person were to just start digging with a shovel (however, a kid with a shovel and bucket is no problem).

Some may also argue that it’s the will of nature for water to go wherever it wants. After all, water molecules don’t have a collective will or a brain to decide where to go. Allowing the flow of water in nature to go in any direction should be respected. In most cases this is reasonable. So then, should we now just allow the flow of the water to continue the way it’s currently going despite the destruction and the fact that it’s more unnatural than ever?

A restoration is needed to simply return to the flow that once was at Surfrider. Water will always take the easiest path, but in this case, it was redirected by a human mandate changing the natural dynamics of the creek and the estuary.

Save the Waves designated the wave at Malibu as its very first World Surfing Reserve. A historic aerial photo shows the healthy sand cell and the exit of the flow at the top of the estuary. Also note the agencies and non-profits that have committed to protecting this wave. Some of these supported the estuary project hoping for a good outcome. Now, everyone should look forward to finding a way to reverse the unintended negative results.

Editor’s Note: This piece was c0-authored by Gary Ross and Erin Edwards, both Southern California locals. Gary Ross and photographer Marty Peach were Dora-era Malibu groms locals. Marty Peach continues to be a steward of Malibu and Gary works with research with reefs, wave energy and sand.