Is Localism Dead and Buried or Alive and Well? 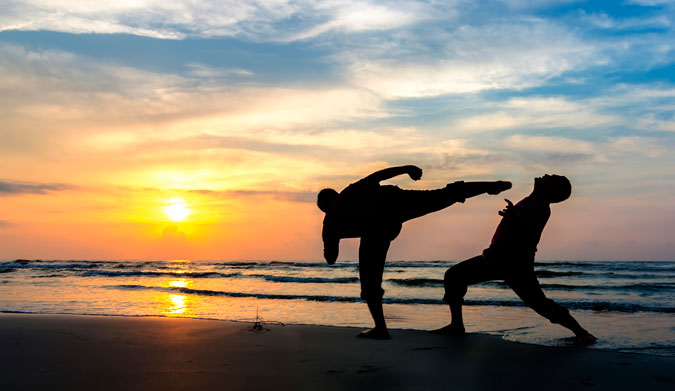 I was still very much ingrained in the “hopeless kook” phase of my surf life when the movie Blue Crush hit the big screen. One particular scene scared the bejeezus out of me: when Kala Alexander and his buddies rolled up to a secret locals only spot, setting up the duel between a territorial local and the innocent haole tourist victim. Don’t lie. You know exactly which scene I’m talking about. And if you were still learning the ropes of navigating aggressive lineups while conquering your own uncoordinated battle with surfing’s tremendous learning curve, this scene pretty much encompassed every fear you had of that dreaded word: Localism. I was terrified that some day I might unknowingly surf the wrong spot only to have those exact same actors pop out of the bushes chanting, “You flew here, we grew here.”

Christopher Taloa was the actor who played that main antagonist. And if you ask him, he’ll laugh and tell you the role just goes to show how good of an actor he is. Why? As my teenage self would be relieved to know, he’s nothing like that character. In fact, his views on using physicality to intimidate and dominate a wave are challenging the status quo of localism. And it all started with a simple post on Facebook.

Taloa is quick to assure you he sees no room in surfing for violence. “I don’t think there’s any warranted reason for hitting another person unless you’re protecting somebody directly in danger,” he says. He brought that philosophy with him when moving to California from Hawaii, which is why he took personal offense to learning he wasn’t welcome at a particular wave near his new home in Redondo Beach. The infamous “Bay Boys” of Lunada Bay let Taloa know through threats and intimidation tactics they didn’t want him in the water at the famously localized spot.

“They told me don’t even park in the back areas. There are people in the area that are in on it, and if you park your car in the neighborhood, they’ll just destroy your stuff.”

He couldn’t so much as show up to look at the wave without being harassed and threatened, let alone attempt to surf it. He’d only endure the threats for so long. Eventually enough was enough, and Taloa decided to send out a Facebook post inviting others to show up at Lunada in protest. He surfed The Bay with friends and supporters on notice.

“I didn’t think it was that big of a deal, I was just going to surf,” he remembered. But he’d started a movement. One Facebook post and a sizable following landed Taloa on the news and made him the lead in unlocking one of Southern California’s most localized and protected waves. “It’s [social media] such a wonderful tool if you use it properly. I have a huge following and I’m going to use it in the proper way to get this taken care of.”

A year later, even though Taloa doesn’t regularly surf Lunada Bay, his goal remains for it to be “open season for the kids” by the day he moves back to Hawaii.

“To me, that place is worth fighting for,” he said. “It’s the only Southern California wave with that type of open ocean power.”

Today, social media, technology, and the overall connectedness of our world can influence the status quo for the better. Nearly everyone has a cell phone by their side at all times, each armed with a Twitter account, Facebook, Instagram, text messaging, YouTube, and a handy camera ready to fire. Localism in the sense of unwelcoming vibes will probably never go away in our community, but the trend of how we’re dealing with those vibes points toward change–largely in part because of the ability to broadcast our transgressions to the world. In Taloa’s story, it resulted in a wave of support and even local news coverage, all by pushing send on a Facebook post. In January, a recognizable name in the Santa Cruz surf community was ticketed on suspicion of misdemeanor battery when the typical “you dropped in on me” exchange grabbed a little too much attention. The police report paints the picture of a harmless argument that never escalated beyond a shove in the water. But the damage was done, and a zero tolerance policy by local law enforcement landed Ken Skindog Collins in local newspapers, warranted or not. And in Los Angeles, no amount of tweets, posts or shares could label two surfers quite as well as a well-titled Instagram account, reaching the cell phones of over 124 thousand people when video of a parking lot scuffle dubbed them both @kook_of_the_day. So, is physicality really still en vogue among surfers?