The History of a Smashed Up Surfboard

The first seriously smashed up surfboard I ever personally suffered came as a result of my oldest (teenage) son beginning to follow in my footsteps as a surfer. My custom-designed shortboard ended up hanging in the local surf shop – smashed up and lynched. A hand-written sign with an arrow pointed to it and read: “The Point.”

“The Point” being the local rocky right point break and the point of the sign being to say, “THIS is what can happen to your board there.” My son took my board without my permission and tried to copy the top locals who took the short route out via a rock slab where timing was essential. A learning curve for Tom with my board smashed beyond help and displayed for maximum intimidation and pride by the local Black Rock Surf Shop owner.

The smashed up surfboard in question, however, was bought in Santa Barbara last September. It had been shaped by Rennie Yater as the prototype for a $50,000 Surftech mold. Five fin boxes on a beautiful, white 9’3’’ performance longboard. Pencil lines were left on the deck and bottom. Apparently, Surftech was taken over by a larger company that put a hold on new models, and my board was sold as new but reduced by $200 because of the pencil lines.

In the water, it flew. Light to the touch, clean in movement and a real pleasure to have and to ride. It came with hand-written paperwork by Rennie Yater explaining that is was a prototype, etc. I could even foresee that it might be a collector’s item in the future.

Thanksgiving Day 2013 saw a good groundswell hit the Central California coast and I surfed for a second time that afternoon. Paddling back out halfway into the session, I was about to take a large set wave on the head when, out of the corner of my eye, a shortboarder dropped out of the sky with me at the base of the wave. The only thing I could do was a quick roll to get my board between my head and his fins. The impact, an inch or two from my head, was hard and powerful. I think he would have killed me if his fins had hit my head. The impact was that audible.

As soon as I surfaced, I pulled my board to me and saw its back had been broken.

It was severely sliced and saved my head!

I got out as quick as I could before it was snapped completely by white water. The guy that did it had disappeared, and I hadn’t seen a face – just someone dropping at speed out of the lip and out of the sunset.

Anyway, I didn’t want to hassle with someone as immature and self-absorbed as I imagined he must have been. Not worth the involvement to try to get him to pay for the repairs. So I got it repaired myself.

I told the guys who repaired it I didn’t care about looks as long as the repair was strong and the board stayed light and rideable.

I had two months more of good rides. The board was still sensitive and responsive in the water. The day of the Rincon Classic 2014, while Dane Reynolds got the best heat score of the contest, I rode one of the better waves of my life, finishing up 200 yards along the highway past Rincon Cove. The board delivered all of its promise! Early next morning, Monday morning, the swell had doubled and within twenty minutes of paddling out at Indicators, the board was snapped again.

So the guys repaired it again, almost for free, as it was the first snapped board they’d ever had snap a second time. They also put in some wood strengtheners on the deck.

This time, they put in wood strengtheners along the stringer which they hadn’t figured was broken the first time around.

Back in Wales, where I’m from, an artist and friend suggested I use Posca paint markers and have some fun. I actually used simple acrylics on the bottom as I explored what I could achieve.

I quite liked the scarred effect on the deck of the repair but eventually was inspired by the shape of the Yater decal and went with a Superman/Mark Richards color scheme. I sent for the four Posca paint markers I needed and went for it.

In practice, things didn’t go so close to plan! I penciled in a design shape and got the yellow and blue on.

I started what was to be the Superman red, but once the paint flowed, I discovered the company had sent me a fluorescent marker by mistake. I tentatively persevered, but disaster!

But the deep blue marker came to my rescue. I covered up the pinky red fluorescent stuff with the remaining blue!

I drove to Santa Barbara through two rainy storms, met someone for coffee and, while there, checked the internet which suddenly was giving optimum conditions for Rincon by 10am that morning. The sun came out and I drove there and paddled out. No crowds, maybe thirty guys strung out along the quarter-mile point. Rincon has a reputation that, when it’s good, it’s more of a social event because there are too many people and surfers who end up talking more than actually surfing. I copied a guy on a red surfboard and sat right at the top of the point. Waves were head high and larger with beautiful conditions. My repaired board flew and I started getting big waves with two to three hundred yard fast rides right down the point from Indicators to the white flagpole. I would end feet from the rock-strewn sand and hobble out over the rocks, walk several hundred yards around to Indicators, paddle out in between crunching sets and do it again. These were some of the best rides of my life.

On one wave, I kicked out early and paddled back up the point instead of walking. A guy called out, “That was a great ride you had then. I’ve been seeing you getting all those good waves and watching you walking back up the point. You’re making all of us shortboarders jealous!” Stoked! Full circle from the kamikaze shortboarder who started my journey to make something good out of his junky actions.

Out at the top of the point, I met a friend named Greg who is a long-time Rincon local and rides a kneeboard now. In the water, I asked him to rate this session out of ten as far as how good Rincon can get. Greg said, “Seven, or even eight out of ten – and without the crowds!”

As I changed in the car park, a new friend phoned – Steve who set up and used to run SURFAX. We had met in the car park the day before. Steve had told me that a gold decal on my board would show that Rennie Yater shaped it himself. Sure enough, we looked and there was the gold decal, as expected. 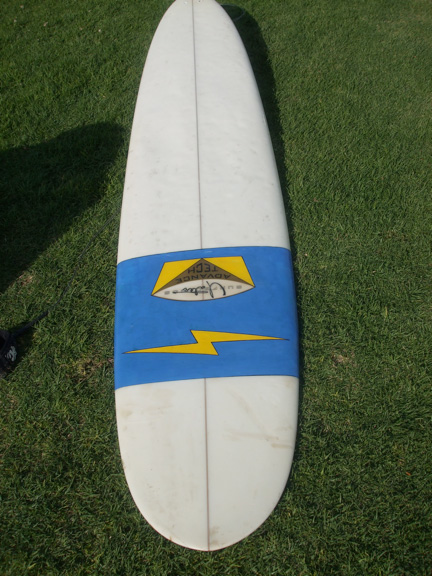 A few days later, Steve emailed to say, “Stoked to hear you got good waves. I went out after I talked to you. Thanks for the tip. I would concur with Greg that it was about a 7 out of 10, 8 might be stretching it.

It is not uncommon for people to say it was the best waves of their life because when it’s good, it’s one of the best waves on the planet. It had more of a westerly direction which makes it more difficult to get a wave the length of the entire point. A more northerly swell (NW direction, it can’t get a due north above about 305 degrees) hits the point at more of an angle and on days when it’s a 9 or a 10, almost every wave can be ridden the entire length of the point. When it’s that good, it’s as good as anywhere in the world.

Even if you’ve been a local for 50 years (me), it still amazes you when you see it or ride it, as if it were your first time there…”