The Humbling Moment When You See Yourself Surf on Video 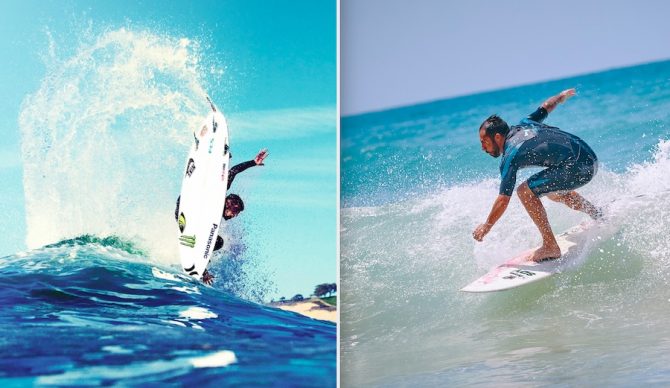 What you think you look like and what you actually look like. Photos: Left, Mohamed Nohassi, right, Vidar Nordli-Mathisen.

I was in the Middle of Nowhere, Mexico, staring at the best right-hand wave I’d ever seen in person. This was the culmination of a dream – I had always wanted to go on a proper surf adventure by myself, wandering around a remote area in search of waves armed with only a map, surfboard, and tank of gas. The wave of my dreams appeared, but so did the remoteness. I would have turned fantasy into reality five minutes sooner had it not been for the herd of cattle that needed to cross the bumpy dirt road leading to the beach.

I took out a camera and set it up on a hill that overlooked the break. Normally, I would never do this out of fear someone would call me an attention-seeking camera whore. But this was MY dream moment, damnit, and I was going to capture it all. There was also no one else around to stop me. The last human being I saw was miles away at the end of the unpaved path.

Aside from a random picture taken when I was a teenager, I had never seen myself surf through someone else’s perspective. My level of surfing had so far been a self-evaluation conducted by my own eyes and occasional GoPro footage. And, from what I could tell, I was pretty good. Not like, competition good, and maybe not good enough to earn the coveted “shredder” or “ripper” moniker, but a step below that. I am the guy that you see surf and think “there goes a delightfully okay Southern California surfer” before turning your attention back to the ladies and gents that really shred. A splasher, maybe? Yeah, that seems accurate. I am a hardcore splasher.

I splashed my dream wave to the full extent of my delightfully okay abilities. It felt like the best session of my life.

Post-surf, I loaded up the footage onto my computer to view the results. Still high from my major solo score, I was beginning to think there was a chance I was even better than I had led myself to believe. One particular wave held the key to revealing my true surfing acumen: a head high right that featured multiple turns, a snap, and finished with a hit off the lip that sent me soaring over shallow rocks. Through my eyes, it was awesome. It might even fall into the category of “sick.” Preparation had already begun to find the proper caption and hashtags to whore this clip all-over social media.

But the instant replay booth revealed a different story. On-screen, I watched in horror as the pretty good surfer of my mind’s eye transformed into a knee-less Frankensurfer. Every movement was rigid, immediate, and ill-planned. Somehow, I had discovered a new way to generate speed by flailing my arms around while bouncing up and down – a natural evolution of the Huntington Hop. My snap and turns were ugly, rudimentary techniques that got me from the top of the wave to the bottom, but lacked style and flow. It seemed to be a true reflection of who I really was – an overanxious, uncoordinated weirdo with a crippling caffeine addiction. I did not appreciate this video staring so deeply into my soul.

And the lip hit over the rocks, the coveted move that would look perfect on Instagram and secure me a sponsorship, was nothing more than a pump up the face and a stiff turn that angled the board just enough to make it back down to safety. The rocks were not even visible, eliminating the sexy danger factor. The wave I thought I ripped apart was merely inconvenienced. There were no buckets of spray to be found, only cups of water casually tossed aside.

This surfing wasn’t sick; it was ugly. I was ugly. This voyeuristic re-watching of my life was ugly.

My fluttering heart dropped into my bowels. It took almost twenty years of surfing – of losing sleep to dawn patrols, blowing off social commitments that hurt relationships, throwing money at new boards and gear, and braving chilly waters leading to the onset of surfer’s ear – to discover that I am just okay. I am no hardcore splasher. I am a fraud.

Surfing is soul-crushingly hard. The amount of minutiae to master is staggering. You need to read a wave to get to the proper take-off spot, popup at the precise moment, get your feet in the right place, shift your weight, and imagine yourself as a coiled spring down the line. Oh, and all of this needs to be done while wearing a skintight neoprene onesie. That’s the abridged version. Being slightly off in any of these areas can mean the difference between a lackluster turn and a thunderous snap that douses the entire lineup. Cringing at yourself on camera can be one of the most beneficial tools for progression, highlighting the areas you need to work on to miss fewer sections and botch less maneuvers. I just wish the lens was not such a cruel teacher.