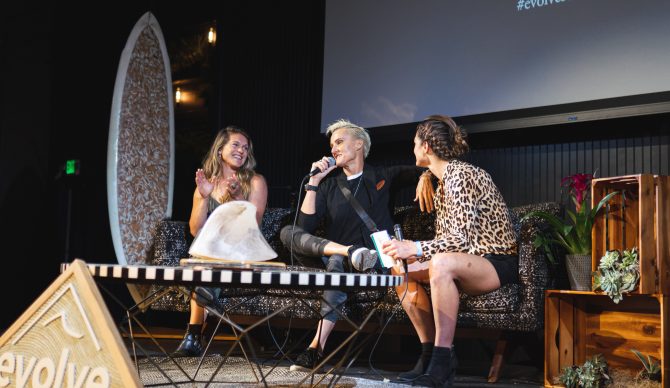 The Inertia’s Second-Annual EVOLVE Summit united trendsetters in surf and outdoor culture to tackle our most pressing topics.

Los Angeles, Calif., August 17, 2019 – The Inertia team is humbled and honored by the powerful conversations that took place among thought-leaders from all sectors of surf and outdoor culture at its second-annual, sold-out EVOLVE Summit at Playa Studios in Culver City, California.

“It’s such a jolt of energy to gather so many talented, diverse people in one room to learn and get inspired from one another, and I feel so lucky to play a role in that swirl of energy,” said The Inertia Founder, Zach Weisberg. “To me, that’s what it’s all about: approaching the world with an open mind, eager to learn and source inspiration from not-always-obvious places to apply to our own lives and the things we care deeply about to hopefully make them a little better. That’s what this gathering strives for.” 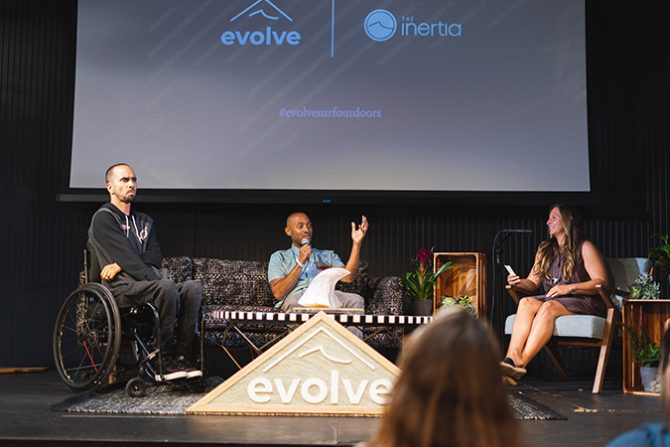 Life Rolls On founder and adaptive surfing world champion Jesse Billauer and Stoked Mentoring Founder Steve Larosiliere discussed their respective journeys building world-class non-profits with Changing Tides Foundation co-founder Becky Mendoza in the opening panel, Surf and Outdoors as a Force for Good presented by Kindhumans. Billauer highlighted the importance of his Life Rolls On Foundation in getting all people with movement challenges in the water while Larosiliere talked about Stoked Mentoring’s role in providing underprivileged kids with opportunities in boardsports.

“It builds community. It builds confidence. It builds self-esteem. Relationships, friendships,” said Jesse Billauer of his work with Life Rolls On. “What’s better than seeing a little kid go back to his school, and they’re like, ‘Hey, what’d you do?’ And he’s like, ‘I went surfing. I went skateboarding,’ and they become the superstars of their schools?” 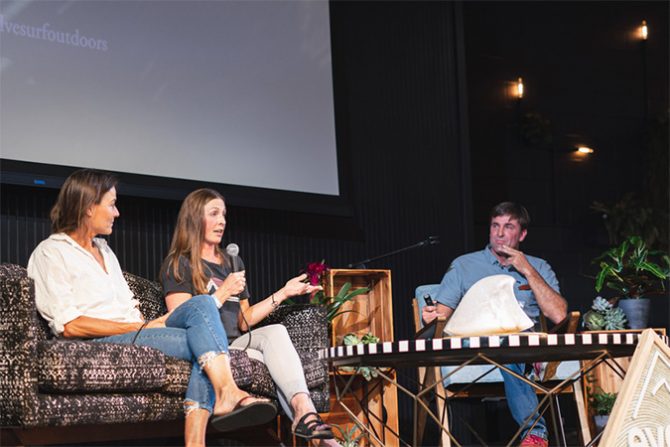 Kimmy Fasani and Hilaree Nelson offered an inspiring perspective in The Art of Radical Parenting panel presented by Qalo where they shared their experiences becoming mothers at the height of their professional careers. Each has enjoyed incredible success in their respective sports, Kimmy in backcountry snowboarding, Hilaree in ski mountaineering. They touched on the evolution of the industry where more than a decade ago, Hilaree had to take a pay cut when she first became pregnant.

“I got dropped by my ski sponsor,” said Nelson. “I took pay cuts other places. I was not my best advocate. I was so unsure how I was going to move forward as a professional ski mountaineer, and be a mom and have kids and do all this juggling. I think that’s what I’ve learned moving forward is that we can do so much. And now that I’m in this position of being a pro skiier and climber for 20 years, and I see young women coming up, I’m in this really unique and amazing position to be able to mentor and help these other younger women as they’re coming in…I think things have changed.”

Fasani, who became a mother in March of 2018, found an outdoor industry that has embraced mothering and sponsorship with Burton offering her a two-year window before returning to the snow.

“Being able to talk whole-heartedly with [Burton CEO Donna Carpenter] saying I don’t want my career to end,” said Fasani. “I’ve just come off two momentum years. And having her not even question me. She was like, ‘Let’s do this.’ …Just being able to have that support and that connection and that alignment with these brands that I’ve built and them standing by me as I develop this new career for myself. There’s nothing that compares to that.”

They also offered their general philosophies on integrating the outdoors into their children’s lives. “I really believe you just have to jump in and go for it with two feet in,” Hilaree said, receiving applause from the audience. 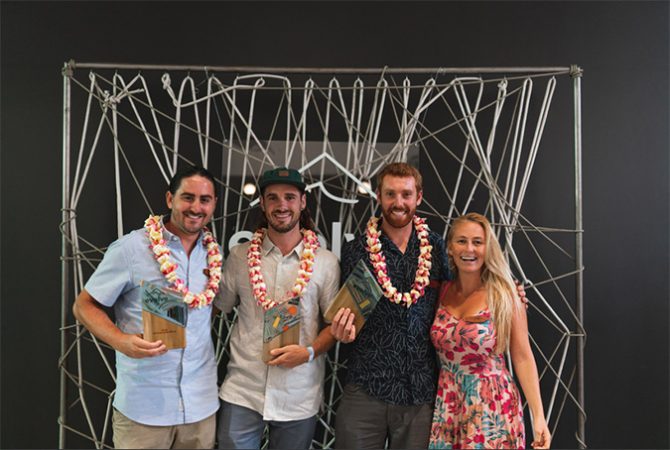 Television host and activist Alison Teal then hosted a passionate panel on The Health of Our Oceans presented by 4ocean. Teal spoke with 4ocean Community Cleanup Manager, Daniel Murphy, who shared stories from the field, where his organization has cleaned up more than six million pounds of plastic from the ocean and managed to create an important value chain from garbage.  Taylor Lane and Ben Judkins of The Cigarette Surfboard project debuted a trailer for their upcoming film featuring Jack Johnson, who surfed Lane’s board, made of 10,000 cigarette butts picked up on the beaches of Southern California

“The ultimate goal with the film is to make a massive shift within the surf community and the surf industry. There are a lot of threats beyond single-use plastic that are threatening our oceans,” said filmmaker Ben Judkins, “and the best thing you can do is to get involved in some way. The best way is to start.” 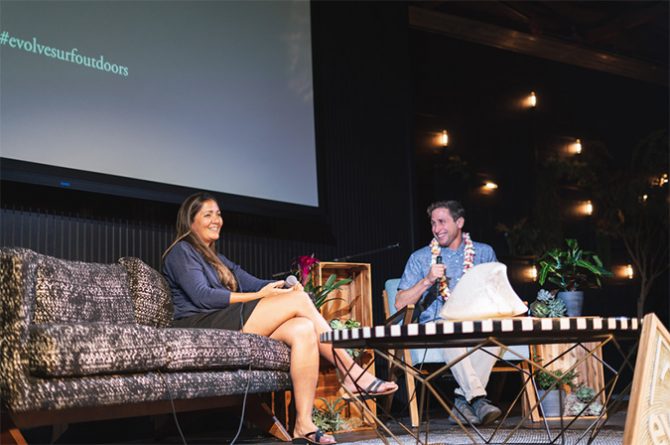 Renowned spearfisher Kimi Werner captured the audience’s attention with the premiere of her new film, Three Hearts Home, which documents Kimi’s reunion with her brother, Dr. Randy Kosaki.  Kosaki, who grew up in an entirely different household after Kimi’s mother chose to give him up for adoption due to a challenging set of circumstances, ultimately became a chief scientist at NOAA. The two have made profound contributions to ocean advocacy in their own respective ways, and have a mutual respect for each other’s skills. Kimi’s conversation with The Inertia’s Zach Weisberg was full of powerful messaging as she then challenged the audience to find out where their food is coming from to improve the quality of our connection with the earth. “Not everyone is going to go swim to the bottom of the ocean and pull [a giant fish] out before sunset,” she said. “That’s not what I’m suggesting, and everyone’s path is going to be different…but I think the number one thing we should all be doing is just at least owning that human-born right. Where does our food come from? Where can it come from, and I have the right to know. I’m going to ask these questions.” 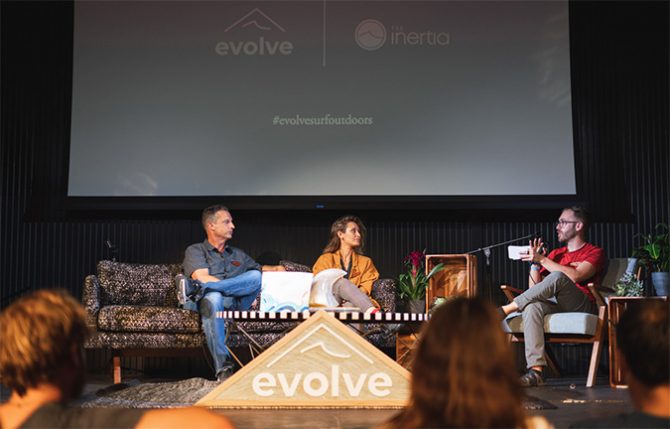 Kassia Meador, Caliva Head of Beverage Chris Cuvelier, and Conor Murphy, Chief Science Officer at The Flow Research Collective then took the stage for the panel on CBD and Cannabis, Fact and Fiction in Surf and Wellness presented by Zola and Caliva.

“We know that there are positive benefits to stress management, pain relief, and that genre of benefits,” said Conor Murphy, Chief Science Officer at The Flow Research Collective, “and that’s one of the reasons working in this research field is so fascinating because we’re starting to see what domains does this actually apply to and where does it not, and bringing that rigor there is something I’m very personally motivated about.”

The group shared both anecdotal and empirical data aimed at better understanding the relationship between CBD and wellness. 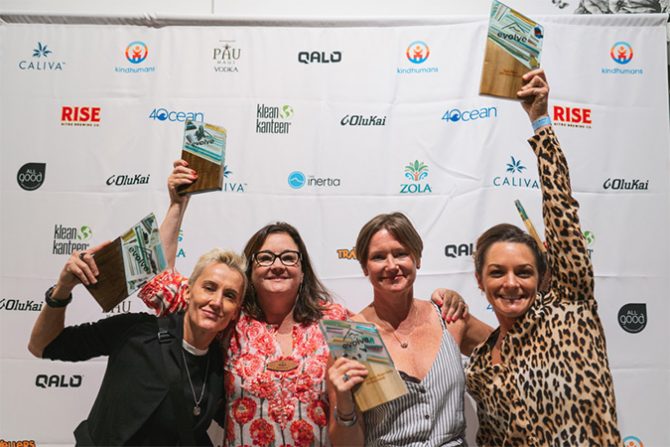 The Committee for Equity in Women’s Surfing, fighting the good fight. Photo: JB

The Inertia concluded the day by honoring the Committee for Equity in Women’s Surfing with a social advocate award for its work on pushing for equal pay in women’s surfing. Their push played an important role in the World Surf League becoming the world’s first professional sporting organization to adopt equal pay. “The takeaway here is that if you want to make change, it doesn’t take a lot of people to do it. Sometimes, you just have to ask for what you want,” said activist Sabrina Brennan.

Keala Kennelly, the 2018 Big Wave World Champion, joined fellow big wave surfer Bianca Valenti and freeskier Michelle Parker to continue the conversation for the day’s final discussion: Women Boldly Pushing Surf and Outdoor Culture Forward. Each athlete shared their personal experience in navigating careers in outdoors, what they have achieved, and what they hope for the future. Kennelly and Valenti discussed their recent, successful crowdfunding initiative at the 2019 Puerto Escondido Cup, where the group raised more than $9,000 to close the pay gap between male and female competitors.

“Do the fans want to see us getting equal pay? Yes, yes they do. The people have spoken. Equality is what they want,” said Keala Kennelly.

Freeskiing icon Michelle Parker reinforced a sentiment of optimism and the significance of strong female role models in surf and outdoors.

“I’ve been forging this path forward, at times, without a path to follow, but a huge shout out to Kimmy [Fasani] and Hilaree [Nelson] for having kids and being outspoken about it, and that wave has created such a change,” she said. “And that goes down to having Donna Carpenter at the top of Burton making changes in women’s contracts. That’s been really cool to witness and be a part of. For me, I think of it in a way that if I can see it, I believe it, and it becomes attainable. And I look at other women and at you two as my absolute heroes. And when I see other women do it, I’m like, ‘I can do that too.’ My path has been: I’m a doer.”

It was an electric night for the surf and outdoor industry that inspired the sold-out crowd and international webcast viewership to consider new ways to make a positive contribution to the places and culture we love.

Special thanks to our presenting sponsors: OluKai, 4ocean, Zola, Caliva, and Klean Kanteen as well as our grassroots partners Pau Maui Vodka, Qalo, Kindhumans, Rise Brewing Co., All Good Products, Travellers Autobarn, Travel with Meaning, and 805 Beer for making this monumental gathering possible. Thank you also to STOKE for enabling us to host this event as sustainably as we possibly can. A portion of proceeds will benefit STOKED Mentoring and Life Rolls On Foundation.