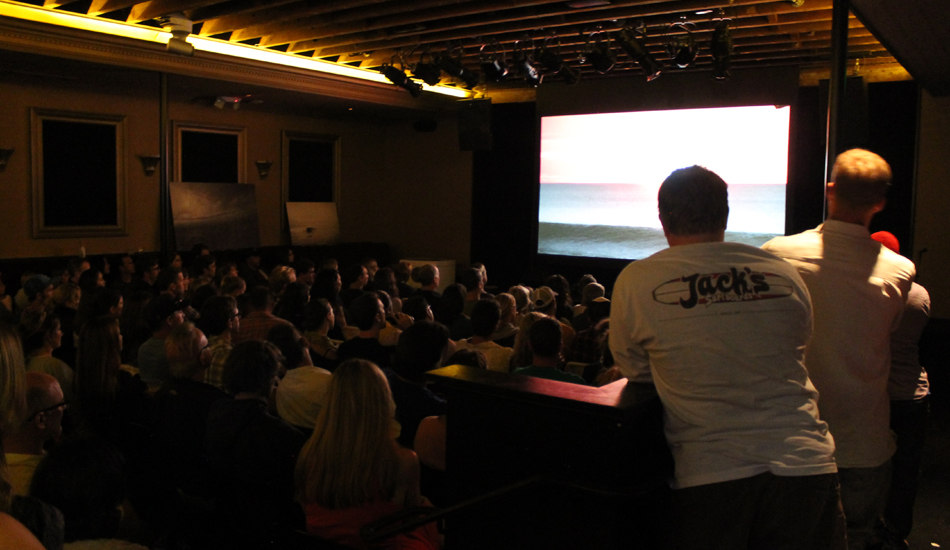 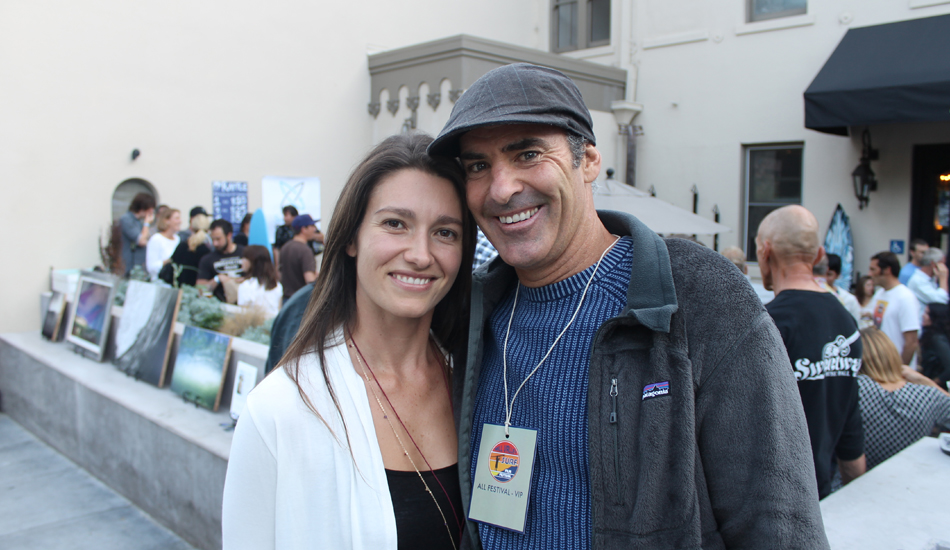 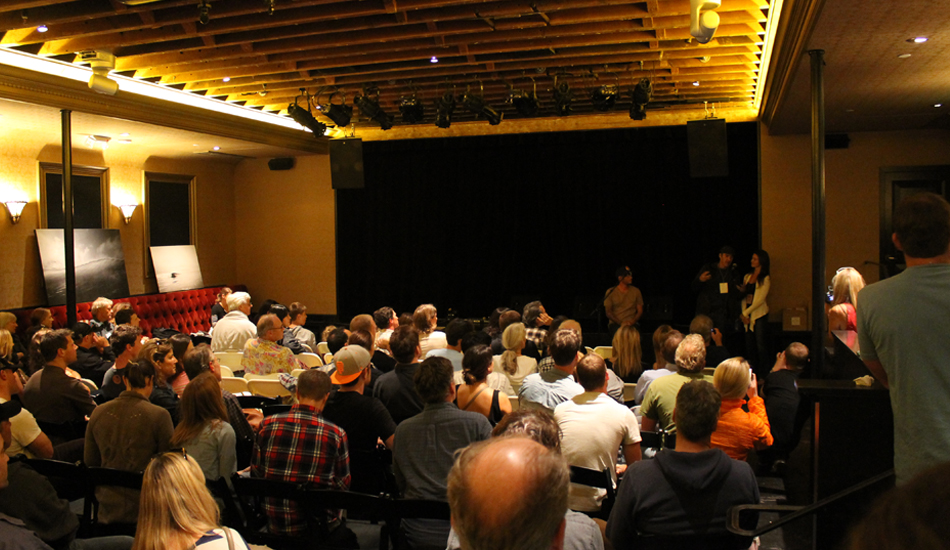 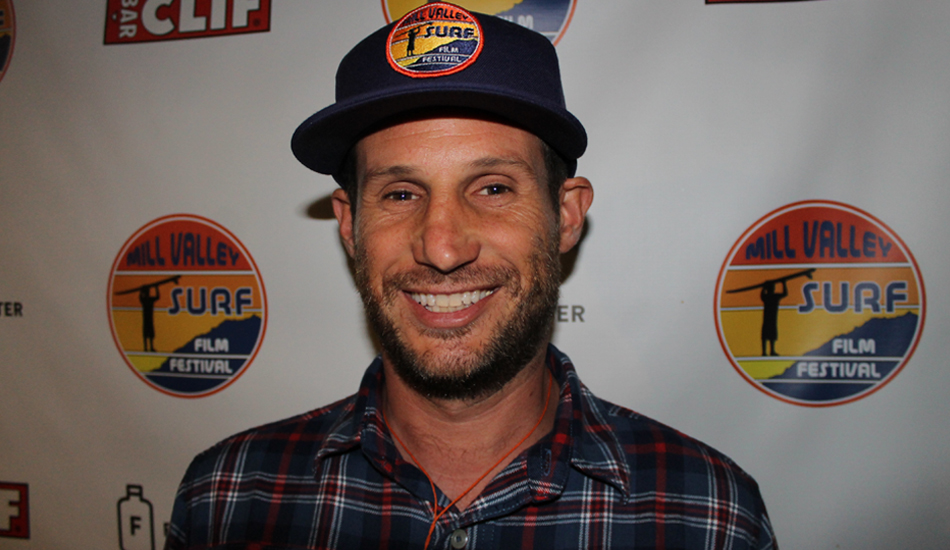 The man behind all the madness–Ari Lurie, Mill Valley's man of the hour. Image: Green 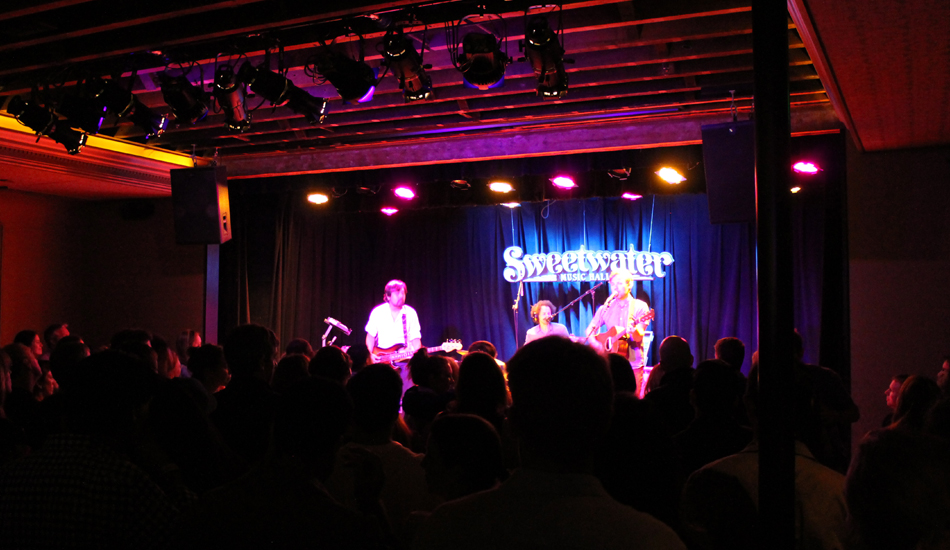 Bay Area three piece band Rogue Wave closes out the festival, and most people dance to the music. Image: Green

It’s Saturday night and I’m in a small bar in Marin County listening to a Bay Area band play music that has the whole crowd dancing. I should have been at The Inertia’s third birthday party in Venice, but alas, plans are plans and I am here. But this is not a bad thing.

The beers are dark, beards are thick and no one wears backwards hats here. It’s more about brotherhood than bro deals, and there is an incredible communal vibe in the air.

Honestly, writing anything that gets published about the Mill Valley Surf Film Festival feels a lot like talking about a secret spot in public, but this is a secret meant to be shared. The MVSFF is two days, featuring 20 surf films (features and shorts), two local bands, two local artists and more.

Nestled at the base of Mt. Tamalpais, just across the Golden Gate from San Francisco, Mill Valley isn’t exactly what you would call a surf town, but Festival Director Ari Lurie would have you fooled. Ari wears a lot of hats in this operation, it seems, but he has a wonderful group of friends, family and volunteers to help put this together. And they work hard.

As I walk up to the Sweetwater Music Hall in Mill Valley where the event is held, it’s only an hour ’til show time and, among other things, Ari is trying to stuff enough chairs into every nook and cranny to fit more folks. But when he’s done, Ari turns to me and sighs, “I need a beer.”

Over a tall cold one, Ari explains to me that he created the festival to share his stoke of surfing with the community, and that’s what its all about. He just wants everyone to come, have a good time and leave stoked to the limit on surfing.

That is exactly what happened. Between Garrett McNamara presenting his new movie “North Canyon: Nazare Calling” to Rogue Wave proclaiming themselves a surf band for the evening, the good vibes were in the air. The Mill Valley surf community was out in force with their arms around each other’s shoulders drinking deep and laughing deeper.

Friday evening the festival kicked off with four films, the last of which was Ryan Lovelace’s Almost Cut My Hair. Ryan’s movie is a love affair with the best in modern-retro surfing and surfboards. The turns are smooth, drawn out; the waves seldom reach overhead and the surfing oozes with style. Oh yeah, and Trevor Gordon kills it on that rabbit’s foot thing.

I exit the theatre for air, and I can’t help but notice Ari shaking some hands and receiving way more hugs from festivalgoers. Most of the people were families from the community, people he knew. He is a community man.

Then comes the second set, which climaxes with “North Canyon: Nazare Calling,” GMac’s movie. I’ll be honest and say I’ve never been a fan of the man, but after meeting him and seeing his movie, I may have been swayed. The movie is a biopic of McNamara and his relationship with the town of Nazare, Portugal. The waves are large, thick and throaty, with an appearance from Slater to top it off. Then GMac and his girlfriend Nicole take questions from the crowd. We find out that the two are always together and Nicole is always on the radio when Garrett tows Nazare. Everyone enjoys.

Songwriter Mason Jennings plays the crowd into the night.

The first is North of the Sun, in which two Norwegian gents travel to the cold north coast to a debris-ridden beach. The entire time, they film themselves surfing, snowboarding, hiking and always picking up trash on the beach. So much trash. So much in fact that they have to have a garbage company send a helicopter to take away all three tons of it.

The heaviest film at the festival by far was Learning To Breathe–the story of Anthony Ruffo’s successful surfing career and unfortunate battle with methamphetamine addiction. A story, which you learn, is not unlike the stories of several other famous Santa Cruz surfers. It was an absolute eye-opener to me as someone who always looked up to a lot of those guys, watching their videos and rooting for them at Maverick’s. But it shows you everyone is human and really brought to light the issue of addiction in surfing. It is an issue that, within our industry, is riddled with controversy and oftentimes hushed.

When the movies all ended, the crowd moved outside for a raffle, which left a beautiful, cheering, older blonde with an (also) beautiful, blue short board. I would love to see one on the other. Sustainable Surf is the non-profit benificiary of the event, and deservedly so.

Then we all crowd back in the hall, buy more beer and wait for Rogue Wave to take the stage. When they do and the music starts, the crowd eventually sways. Smiles all around, and cheering between songs. It’s so beautiful, but I have to leave. I see Ari wading through the pit of people engaged in a new hug at every turn and many pats on the back. He has done well, and he deserves a drink, but you don’t need to tell him that twice. When I see him, he asks, “Did you enjoy it?”

“It was unbelievable,” I gush.

“Good, come back next year,” he says, gives me a hug and I’m off into the indian summer night.