The Myth of the ‘Open’ Australian Beach: Not Everyone Can Access These Spaces Equally 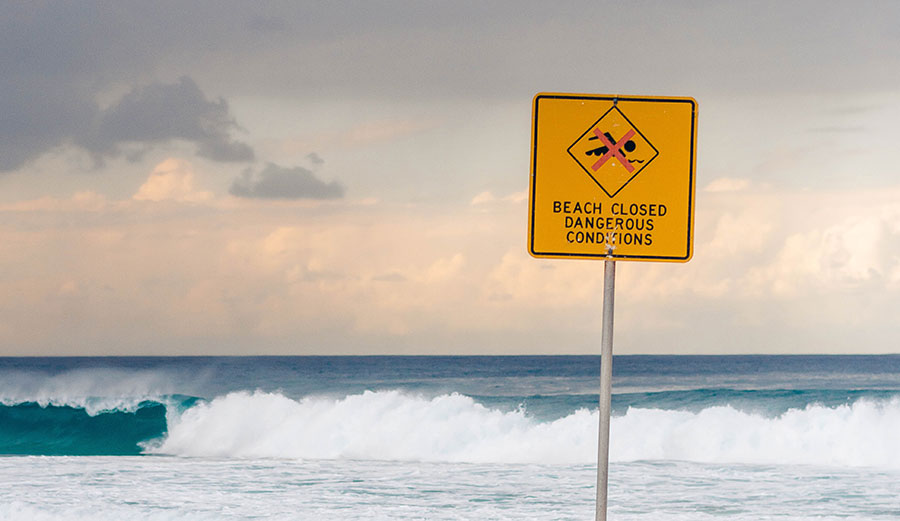 Recently, the McIver’s Ladies Baths in Sydney came under fire for their (since removed) policy stating “only transgender women who’ve undergone a gender reassignment surgery are allowed entry”. The policy was seemingly in defiance of New South Wales’ anti-discrimination and sex discrimination acts.
Managed since 1922 by the Randwick and Coogee Ladies Amateur Swimming Club, the baths are a haven for women and the last remaining women’s-only seawater pool in Australia.

Just over 100 public ocean pools sit on Australia’s rocky coast, most in New South Wales. Segregated baths gave women a place to experience the water, prohibited from most beach access until “continental” (or mixed gender) bathing was introduced in the early 20th century.

The council removed the wording on the website, and put out a statement saying they have “always supported the inclusion of transgender women at McIver’s Ladies Baths”. But this weekend, trans women and allies gathered at the baths, calling for a specifically inclusive policy to be drawn up.

Writing for Pedestrian, Alex Gallagher called the baths “a queer haven”. Of beaches, they wrote:
“There’s likely no other place I feel such an undercurrent of anxiety that I’ll face scrutiny for not conforming to a sexist ideal of what a body “should” look like than the beach.”

This is the latest in a long history of discrimination at Australia’s public beaches. Indeed, Australia’s beaches and ocean pools are a window into deep divisions.

With Captain Cook’s arrival in 1770, coastal beaches were the first sites of early interactions and confrontations between the Aboriginal people and the colonizers.

Indigenous women, such as the Palawa women of Tasmania, once had an intimate relationship with water environments. Water was a playground as well as a source of nourishment and socialization.

The colonial erasure of these histories and knowledge has contributed to a culture where Aboriginal swimmers who defied convention – by participating in formal competition or by serving as lifeguards — were swimming against a tide of discrimination.

Aboriginal people were commonly caricatured at surf carnivals in degrading, costumed representations. The development of organized competitive swimming associations in Sydney in the late 1800s saw segregated “Natives’ Races”: scarcely mentioned in the media, except to demonstrate perceived white superiority in the baths. 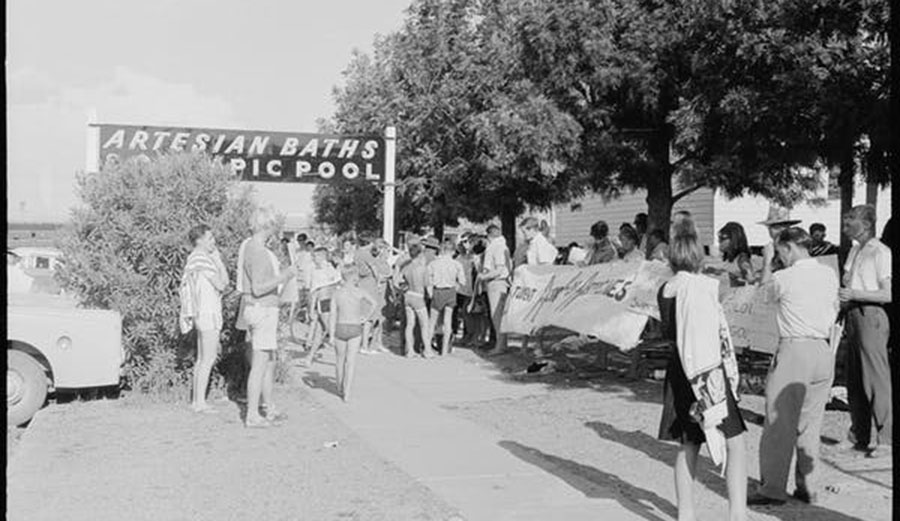 As recently as the 1960s, it was routine for Aboriginal people to be banned from public swimming pools. Owing to this discriminatory legacy, Aboriginal people — despite a history of a strong water culture — have historically rarely participated in organized swimming. But positive changes are beginning to emerge. In the past ten years, there has been a 47 percent reduction in drowning deaths in Aboriginal and Torres Strait Islander people, reflecting the development of programs specifically tailored for remote communities.

The first year women competed in swimming at the Olympic games, 1912, Australians Sarah “Fanny” Durack and “Mina” Wylie won medals. The McIver’s Ladies Baths were an important venue for their preparations. 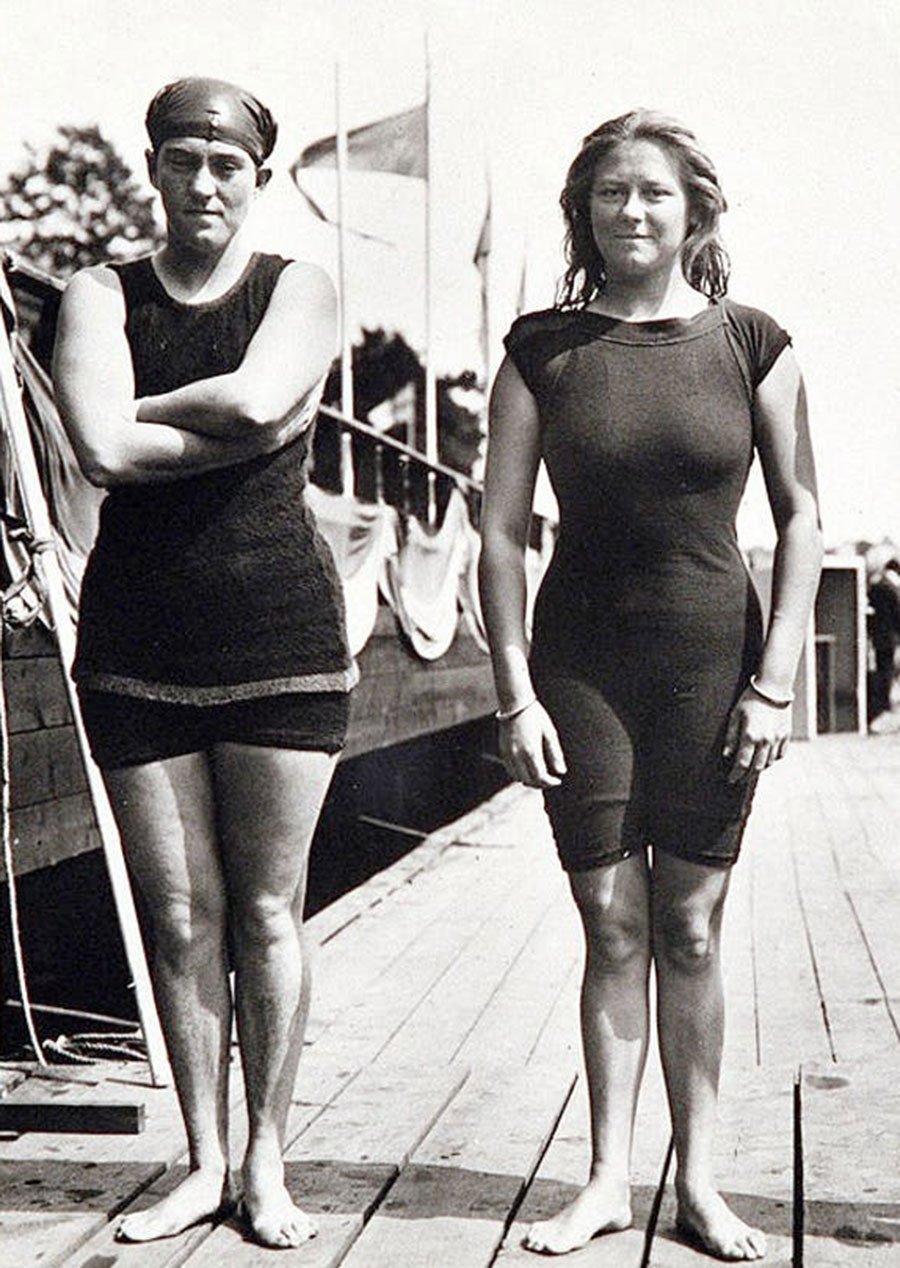 But even as beaches and pools became desegregated along gender lines, women weren’t admitted as full members of Surf Lifesaving Australia until 1980.

Muslim people, in particular those women who wear the hijab, have also long faced discrimination on Australian beaches. This was brought to the fore at the Cronulla riots of December 2005, when a crowd of 5,000 mostly white young men rioted on Cronulla beach in a “Leb and Wog bashing day”. 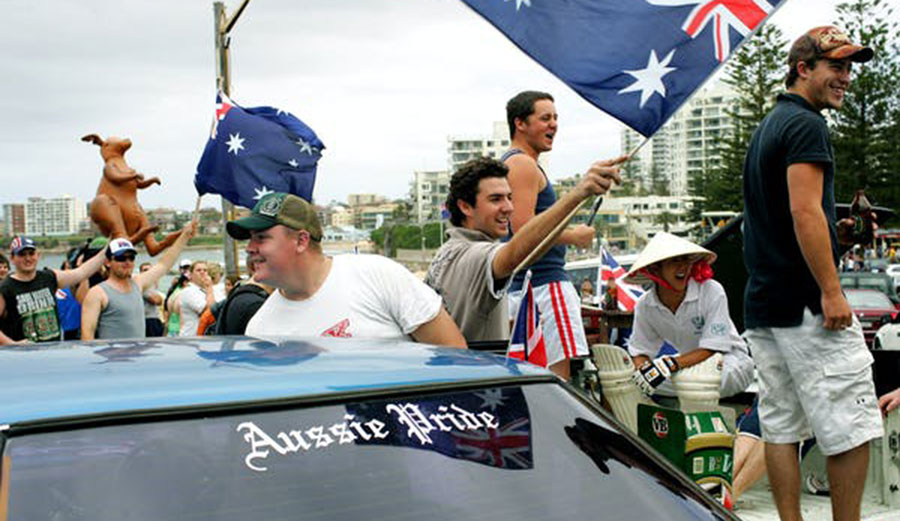 Programs such as Western Sydney’s Swim Sisters challenge Islamophobia at Australia’s beaches. A sisterhood of religiously diverse women, the program allows women a space to challenge themselves and support each other. And 40 years after white women could join Surf Lifesaving, highly skilled Muslim women lifesavers are furthering the tides of change.

Australians living with a disability often face poor beach access and a lack of specialized facilities such as beach matting, access ramps, and beach wheelchairs.

Without easy access to the beach, many with a disability lack confidence in swimming in the ocean, and there are few training opportunities for carers to develop the skills to assist. 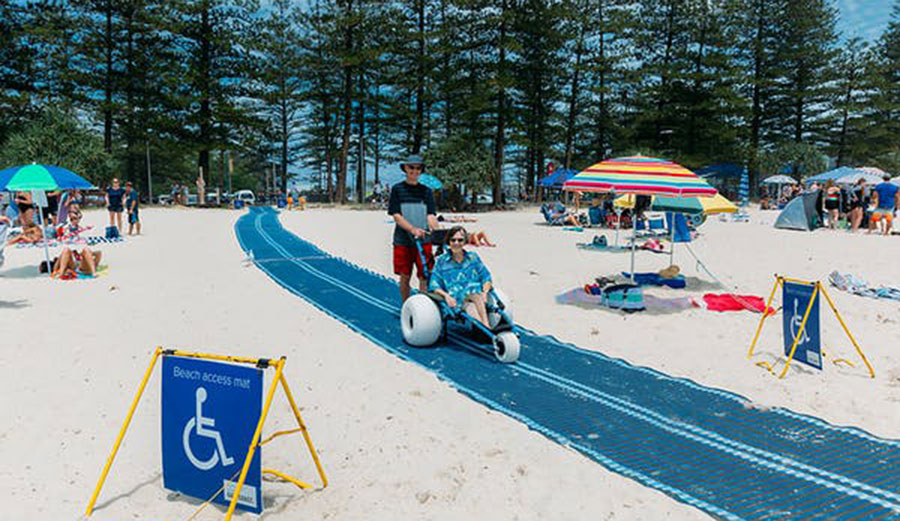 Mats allowing wheelchair access, and accessibility chairs that can travel on the sand and into the water, improve accessibility to beach spaces. Photo: AAP Image/Supplied by City of Gold Coast

Here, too, there are positive signs of change, with Accessible Beaches Australia aiming to open all patrolled beaches to people with disability.

Despite our history, the myth Australia’s beaches are egalitarian spaces persists. We remain a long way off inclusivity for all in our public blue spaces.

The story of the McIver’s Ladies Baths is only the latest in a long history of discrimination. We must ensure everyone can find an ocean pool or beach where they belong.