What Happens in Your Brain When Kala Alexander Punches You in the Face? 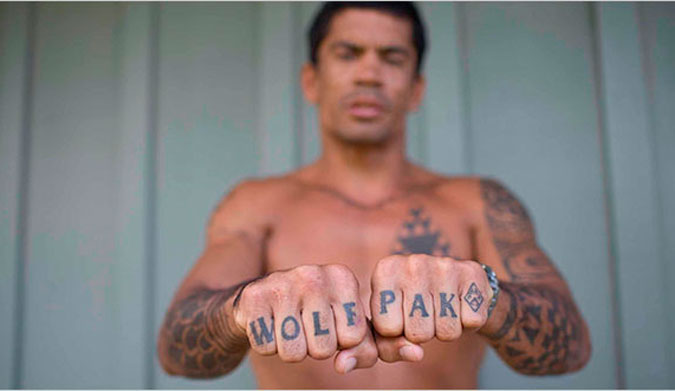 Kala’s ‘WOLF PAK’ tattoo and his fists are processed by separate sets of brain regions depending on if you focus on the letters or his fingers.

After reading this article, you’ll know that one set of brain regions processes “WOLF PAK” and another set of brain regions processes Kala’s fists… even though his “WOLF PAK” tattoo is ON his fists. Specifically, there are isolated bits of your brain that process words and others that process hands and body parts. These regions are adjacent to one another within a part of your brain between the back of your head and your ear referred to as visual cortex. If Kala is about to punch you with his right fist and you read “WOLF” before he knocks you out, the regions processing words are activated. If Kala is about to punch you and you focus on his fist rather than “WOLF”, the regions processing hands and body parts are activated.

So, there is a flip-flopping of activation between brain regions depending if you focus on the tattooed word or his fingers and fist. Though Kala’s hands have not been used in a brain-imaging experiment, many experiments have shown that this flip flopping occurs as you change your focus between two stimuli that are on top of one another at the same time.

Now, if Mike Tyson headbutts you, the same flip flopping of brain activation won’t happen between cortical regions processing faces and words because Mike Tyson’s face tattoo is not a word. If he gets a new face tattoo that reads something like “I’m Mike Tyson, bitch,” then this flip flopping between face and word regions would also happen.

So, the next time Kala Alexander punches you in the face, you’ll have a better sense of what’s happening in your brain until you pass out from the pain.