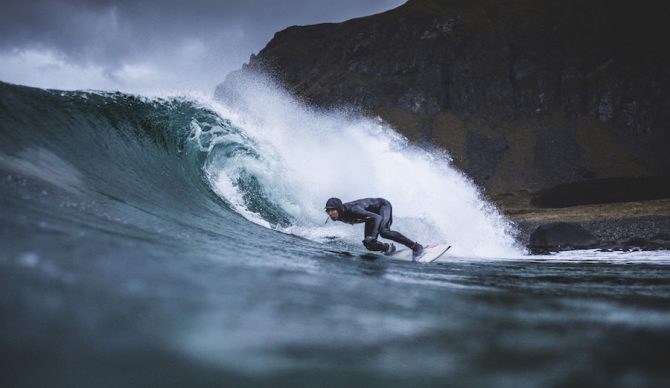 With the onset of thicker more flexible wetsuits, frontiers like Norway are becoming more accessible for surfers. Yet, surfing in Norway is still such an oddity it’s caught the attention of the New York Times. Photo: Redbull Content Pool

It’s characteristic of mainstream media outlets to stumble over their coverage of surfing. Antiquated refrains like “surf’s up” or awkward usage of “dude,” with or without a Spicoli impression, are so cringeworthy that it’s easy to dismiss major newspapers’ ability to write about surfing well.

Perhaps the success of William Finnegan’s Barbarian Days has ushered in a trend, or maybe it’s the product of one. Either way it appears more non-surf-specific outlets are producing more engaging surf writing every day that appeals to general audiences and the surfing core alike.

The latest in the New York Times’ effort to thread that needle is a longform feature on surfing in Norway – more specifically the Lofoten Masters, which bills itself as the world’s northernmost surf contest.

There are moments of discomfort. Lines like, “If the waves were high, that was great, as long as the temperature was higher,” for example, feel a little clumsy. High surf, as in high surf advisory, is one thing. But describing waves as high? Strange.

A second observation is the editorial choice to write wetsuit as two words (e.g. wet suit). In all other aspects the Times maintains an incredibly high editorial caliber. But the style guide likely has some catching up to do as far as surf is concerned.

Beyond those small criticisms, though, the piece does an incredible job profiling the community of Unstad, Norway, the handful of surfers that find themselves there in the early fall for the Lofoten Masters, and the tension faced by a scarcely populated region that finds itself welcoming more and more traveling surfers each year. It’s a common trope in surf exploration and surf history, and one that requires a reporter to delve deeper than the stereotypes – the pitfalls that ultimately lead to a piece that loses any credibility among core surfers.

“In autumn in Unstad, when the valley flames with the gold of birch trees against the red of the houses, there are often more sheep than people on the beach,” writes Times Sports Reporter Jeré Longman. “The waves rumble like subway cars, foaming on white sand and rounded rocks that, from a distance, resemble a colony of seals.”

For a writer who, according to his bio, has written predominantly about Olympic sports since 1993 (ignoring that surfing is now an Olympic sport) the imagery in those few sentences doesn’t come off as corny or forced. Not to mention the actual imagery included in the piece is pretty amazing.

Longman goes on to discuss the pioneers of surfing in Unstad, Thor Frantzen and Hans Egil Krane, who, before the pervasion of wetsuits, wore bathing suits – staying in the water for no longer than fifteen minutes at a time. Later, they began to wear wool sweaters under rubber diving suits to brave the frigid temps. Krane describes his early days of surfing as, “an easy way to meet the girls.”

It’s easy to laugh when non-surf media stumbles over surfing. But when they do it well, it’s important to give credit where credit is due. This is one of those times.

Check out the full feature here.