The Rise of the Mongrel; Or, How Mikey Wright Took Down Two World Champs

Hint: By tossing a football on the beach and practicing cat leaps. 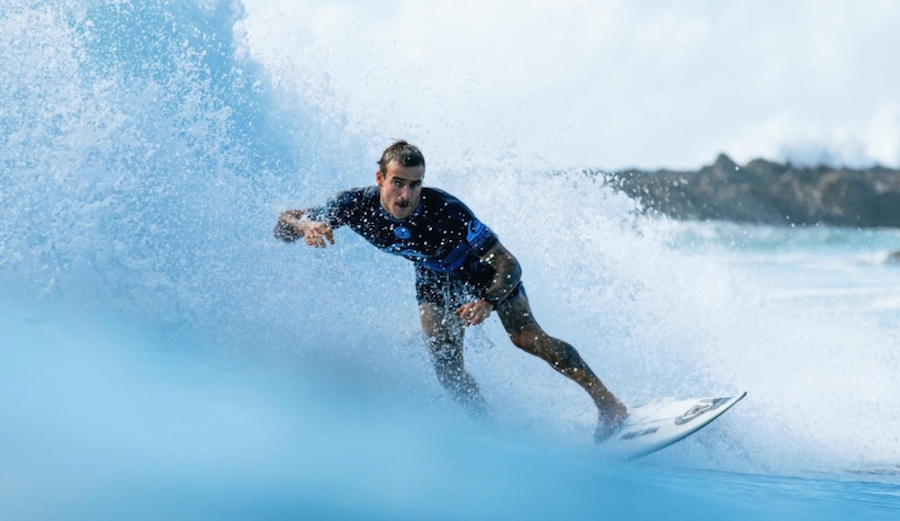 Mikey Wright embodies the “business in the front, party in the back” spirit. Photo: WSL/Ed Sloane

Sometimes when it comes to slaying dragons, what you really need is a mongrel. QS warrior Mikey Wright proved that this week at the Quik Pro Gold Coast by dramatically eliminating two-time and current world champion, John John Florence, in Round 2, and then repeating the feat with world number two and former world champ, Gabriel Medina, the next day in Round 3. Not only did he humble two of the greatest competitors of the last five years of elite surfing and decimate fantasy surfing teams worldwide, he did it with the same casual why-not, just-‘cause attitude that makes his free surfing clips so addictive.

“Well, if I told you I’d have to kill you,” Wright replied with a grin under an unkempt mustache, his face shaded by his favorite label-free outback hat and his beloved Muppet-looking pup, Bacon, licking the salt water off his legs. 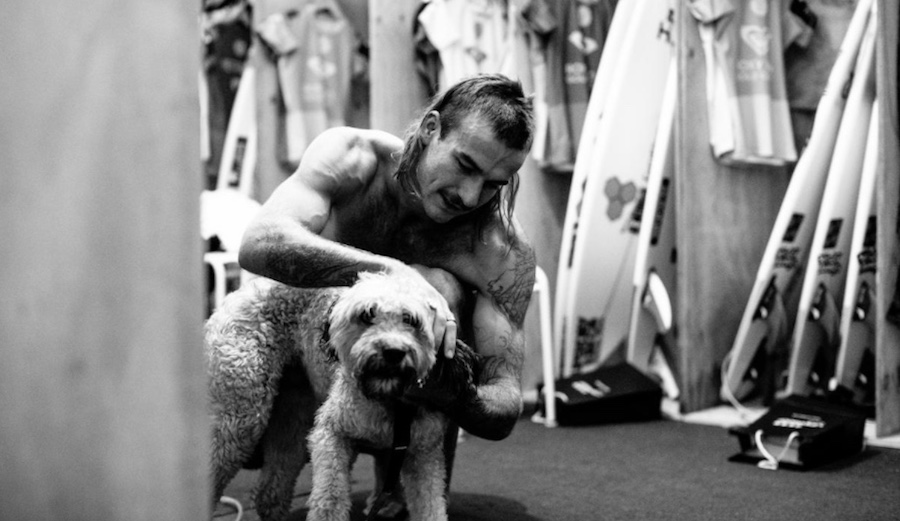 He drives an unspeakably cool retro matte black Chrysler Valiant. And he lets his punk rock lifestyle bleed into his surfing: every unthinkably high boost is like a giant F*CK OFF to the Earth’s gravitational pull. Every miraculous emergence from deep inside a double-overhead Pipeline barrel is a F*CK YOU, OUT OF MY WAY. His gouging carves rip open waves without mercy, then afterward he shamelessly jokes about playing with her lips to make her spray. He earned his Mongrel nickname, and he lives up to it with purely honest lack of care for what anyone thinks.

Except now he’s making an occasional exception for panels of judges. After taking some time to focus on being a free surfer and simply living, Mikey has revamped his competitive drive and thirst for a spot on the Championship Tour. He opened his 2018 campaign in his home country of Australia in top form, first by being on the winning Culburra Beach Boardriders Club team alongside his sister at the Nudie Australian Boardriders Battle (where he made the local news for calling one rule “a bit fingered” during an interview in an effort not to swear on camera).

He went on to win the Burton Automotive Pro QS 6,000 in Newcastle and perform well in other regional Qualifying Series contests, securing the top International QS spot before earning a wildcard entry to his main sponsor’s Championship Tour kickoff event in his home of the past three years, the Gold Coast. His renewed drive to win is similar to the spark that struck his sister after her loss in France in 2015 before she buckled down and went on to win two back-to-back titles.

“I didn’t want to just burn out at a young age. I wanted to finish the grom comps and then I started in the QS, then I just stopped and wanted to experience life, going out and having fun and free surfing and surfing big waves,” Mikey explained. “My end goal was always to come back and try to get on tour, and this year I’m going to try. I’m just getting older in life and I just got that itch to win heats again.”

Like everything in his life, Mikey’s doing it his way. And his way is basically a day at the beach. Before his heats at the Quik Pro, Wright did the same thing he does at all QS events. He doesn’t hang out in the secluded athlete area, instead choosing to sit on a towel on the sand with his mates watching waves or tossing a football around while he practices his cat leaps. And always with his most loyal friend, Bacon, no more than two steps behind him.

“He just likes to get his feet in the sand and feel like he’s at the beach and not somewhere else, just being present where he is. He kind of gets that when he’s down on the beach, so people running around, taking photos, it doesn’t matter. He just chills out on the beach and watches the waves…it works,” said Troy Brooks, who coaches Mikey part-time when he’s home on the Gold Coast.

It most certainly does seem to be working. The early morning upset in the first heat of Round 2 where Mikey ousted John John demonstrated what a calm demeanor — and a lifetime of surfing Snapper Rocks — can do in tricky conditions. Notably ridable waves were few and far between that morning as most hovered at or below two crumbly feet, but Wright took his time, kept his cool, and somehow positioned himself in the perfect spot for choice waves that garnered excellent scores. Any wave the World Champ caught, the Mongrel was right behind him on the next one, and it was always bigger, cleaner, and longer. Now the pressure was mounting: could Mikey pull the hat trick and do it again with Medina?

The answer was yes. In the hour before his match up with the competitive Brazilian, Mikey sat on the sand with Troy and Bacon, looking more like one of the spectators than an athlete, until he put on the jersey and began his active warm-ups. In the neck and neck heat, Medina refused to give up, catching wave after wave to chip away at the combo Mikey put him in early on. In the last five minutes, the crowd on the beach was yelling in agony, terrified the former World Champion would get one last wave and the decent score he needed to end Mikey’s dream run.

“Come on Mikeyyy!” a chorus of children’s voices rang out, and then one individual youngster yelled out a phrase for the whole of Australia: “We believe in you!”

As the announcers dramatically counted down the last ten seconds and no more waves rolled through, the crowd roared. “I have goosebumps,” one normally stoic security guard said with a grin. Everybody loves an underdog, and the Mongrel was the perfect one to boost Australia’s pride that day.

“I’m really proud of him, he just put it all together and took out John John. That’s no easy feat so that’s huge,” said his older brother Owen Wright before Mikey’s second World Champion upset in the Medina heat. “If I had to have a heat with him I think it would be a very serious free surf [laughs]. We’d be going for it for sure. It’s just one of those things, you dream of it. This is one of the greatest jobs in the world, and to share it with your brother is amazing.”

Mikey stayed cool as ever following the monster victories over the title holders, saying, “It’s exciting, but there’s still a long road ahead in this event, so I’ll just keep my cool. I wouldn’t really say I battled them, but to come away with a winning that heat I was pumped. The plan was to just go out there and surf how I surf, have my own game plan and not worry about his.”

Mikey was ultimately eliminated in Round 4 of the Quik Pro, but with his head firmly in the right place under that outback hat, Bacon by his side, and his feet in the sand, Wright will now continue to grind away on the World Qualifying Series, aiming to hold on to his top spot and be able to add a little shameless Mongrel filth to the elite tour by the end of the year.

“Mikey looks like he belongs on the World Tour,” Brooks said, adding that he’s not sacrificing any of his punk surf style with his new professionalism in contests. “He’s dedicating a lot of time to being a good professional surfer and competitive surfer. Hands down, if you watch his free surf clips he has the best clips out in the world. It’s about adapting that for the World Tour. You watch the highlight clips of the World Tour these days and it is a good free surf clip, so to speak. Mikey’s style sort of suits that, so just adapting from free surfing to competition surfing is probably the main thing. He just goes through his motions, sets his course, and off he goes.”