The Scarcity Mindset Is Ruining Your Surf Sessions 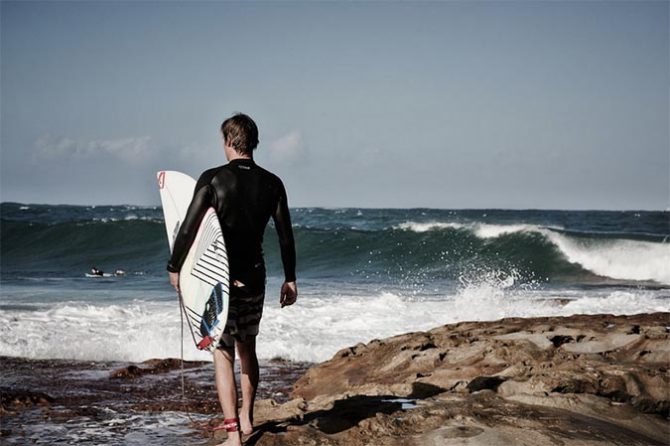 If you’re thinking you lack, then you might be thinking wrong. Photo: Nick Duell

How many times have you heard, “There just aren’t enough waves out here,” from other surfers while sitting in a slow lineup? Or gotten frustrated by crowds, a wave hog or a negative interaction?

If you’re anything like me, it’s more often than you’d like to admit—both for what it says about myself and other surfers. As my surfing has evolved, I realized that the scarcity mindset—the mindset that there’s never enough—was ruining many of my sessions and that might be the case for others as well.

Merriam Webster defines scarce as, “deficient in quantity or number compared with the demand: not plentiful or abundant.” The waves around San Clemente, California where I live and surf can definitely feel like that sometimes, mostly due to crowds and lulling south swells. But I eventually realized that I couldn’t do anything about those factors, that I would have to modify my mindset to make a change.

Richy Bennett, the first psychologist to work globally with athletes on the World Surf League and author of The Surfer’s Mind, has worked with some of the top athletes in the sport on similar issues.

“Surfing is such a wonderful experience that we can be enriched by on so many levels,” Bennett says. “it’s understandable that people become attached to it, though, the discomfort we experience is because of that attachment.”

Most surfer’s attachments vary, he says, , whether it’s to a local break, the ego-fulfillment of catching the wave of the day on the first solid swell of the season or sticking a new maneuver. While that can sometimes lead to good outcomes, it often leaves you disappointed when you don’t reach that result. What Bennett recommends is shifting your mindset from being attached to the outcome, to what your intention is for surfing, both in individual sessions and overall.

“For every surfer, from beginner to advanced, it’s important to think about what’s realistic in the moment,” he says. “If I’m attached to it, when things change, I’m going to be frustrated or angry or even aggressive about it.”

That mindset switch is easier said than done, though. It takes work to look inward and even more work to wrestle with what you find there. Bennett recommends asking friends or family about what your own attachments might be, as they’ll have a more objective view of them. Then the work starts.

“Once we become aware of our attachment, we simply observe it for what it is, then we can transform or let it go,” Bennett says. “I emphasize the universal law of impermanence: that the objective reality will change. It’s important to empower our mindfulness to be in tune with reality and our freedom of choice. That can change our mindset and help ourselves and others along in the surf and in life.”

Greg Long, one of the most well respected big-wave surfers in the world, went on a similar journey himself. For a while in his surfing career he didn’t feel like he had a complete session until he got a better wave than the best one he’d had the session before. He found himself feeling empty after full days of surfing when he should have been feeling the opposite. Over time, he had a realization.

“Your sentiments are entirely dictated by your perspective of what’s happening around you,” Long says. “When you go into a situation with parameters like, ‘I’m not going to be happy unless … I’m not going to be content until…’ that’s when you find people living, no matter how fortunate they are, a pretty miserable existence.”

Long realized that he could only control what he thought.

“Your reality and how you feel is on you for every single situation you’re in,” he says. “You have complete control on how you perceive and react. Having a bad session is entirely on you every time. Surfing should always be a joy.”

His solution was acknowledging what he was thankful for: surfing with friends, having a healthy body and even having the chance to surf in the first place. His advice for people seeking the same satisfaction?

“Acknowledge the tremendous fortune we have to go surfing,” he says. “That should be your benchmark for a pleasant session because there are millions of people that don’t have that. For me, that was a life-changing perspective.”

Personally, I’m coming to the realization that I surf to have fun interacting with nature. Sure I want to keep getting better—to get more barreled, turn harder, surf bigger waves—but if I’m not having fun getting there, what’s the point? Before I get in the water, I make the intention of having fun. And you know what? It’s working. I’m enjoying surfing more than ever.