The Surfer’s Guide to Cryptocurrencies and Bitcoin 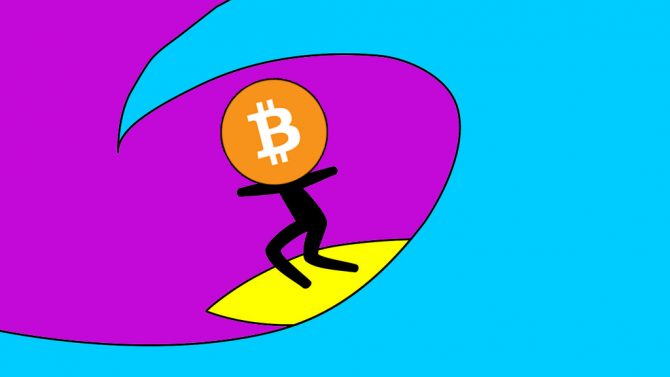 Not even surfing’s impervious from the Bitcoin bonanza. Image: Modified from The Daily English Show

You’d be forgiven for thinking Bitcoin and cryptocurrencies are a fad. Something like CrossFit, or vegans, or deep-fried Mars Bars. Maybe you believe what the mainstream media wants you to believe:  Crypto is a bubble. Perhaps the recent crash has had Janet at the photocopier brimming with I-told-you-so’s and telling you that she “absolutely knew fake internet money was a scam!” But she’s wrong. Market corrections are healthy and normal, especially in emerging technologies.

Or maybe you still don’t have a clue what Bitcoin is or why you should give a whistling shit about it.

But you should care about it. Cryptocurrencies have the potential to remold the entire world, including the surf industry. Blockchain technology could allow us to tear the whole thing down and rebuild it in our own image, in a way that benefits all of us.

Let’s start with Crypto 101, as far as possible in non-endemic, non-techy terms. I know you’re the Thinking Surfer n all, but some of this can get quite weedy. If you’re wondering what qualifies me to offer cryptocurrency advice free of charge then the answer is, honestly, not much. As is the way with emerging technologies, there are no current experts. But I have spent an aggregate of 500+ hours deeply researching cryptocurrencies. There is nothing stopping you from learning and investing as I have. A good place to start is this tutorial on how to buy bitcoin with paypal. Loads of people don’t know how to get started and so this a good thing to learn right away.

Cryptocurrency is a libertarian dream. It’s all there for you right now. I believe that its adoption will have a truly mindblowing impact on society. As such, I’ve taken the liberty of distilling my learnings and applying them to something I love: surfing.

First, take note of three things that will really help you:

1. Stop thinking of Bitcoin and its ilk as a substitute for money, because it’s called cryptocurrency.

A currency is simply an exchange of something you believe has value. Bitcoin and other cryptos are more effective than traditional money, yes, but that only skims the surface of their potential value.

Money is a cultural construct. It’s a store of value and a mechanism of exchange, but only because that’s what you’ve been told. There is no reason why we can’t have multiple forms of “money” that perform different functions. All it requires is that we believe in it and can record it in an effective and trustworthy way.

Cryptocurrencies can operate as money or they can represent pretty much anything else. A token might be worth a month’s electricity, an insurance guarantee, a healthcare treatment, proof of ownership, 23 bananas. Anything at all.

2. Forget Bitcoin. It’s not that important. Blockchain is what’s important.

The invention of the blockchain is the single most important thing about cryptocurrencies.

Let’s use the internet as an analogy. Think of Bitcoin as email. A very handy, early use case for the internet, but hardly the most mindblowing by today’s measures.

In the very simplest terms, blockchain technology is a way for computers to communicate using cryptography to solve mathematical puzzles. Solving the problems creates proof of a transparent, immutable transaction. In other words, a transaction which cannot be faked, disputed, destroyed or altered.

And when you have a record of something that is indisputable, you then have a method of transacting with complete strangers without needing a trusted intermediary to process and validate the transaction. Not only that, but you also have a method of creating data that equates to proof of anything you like: ownership, history, promise, creation, time, authenticity, rules, law…anything.

Anything that can be recorded as data can be secured by a blockchain. And this is orders of magnitude better than being etched in tablets of stone. Blockchains trap data as if it were locked in an uncrackable, indestructible vault for all eternity. A vault that everyone can see through but never touch.

In short, blockchain technology is a game changer. In time, it will change the whole world. Blockchains have the potential to have more impact on human societies than the invention of the wheel, or agriculture, or the Internet.

If you enable a method of peer-to-peer transactions which is immutable, instant, and free, then you enable absolute freedom for all. Freedom from banks, from corporations, from governments…

Right now you are not free. You cannot trust the information you consume or the food you eat. You are tied to your mortgage, your employer, your bank, your identity, your nationality, your records, your devices, your data.

Unless you live an entirely solitary existence as a cave dweller, then the chances are you use the internet. And if you use the internet then you are partially owned by Facebook, Amazon, and Google. These three corporations control a dangerously gigantic chunk of the world’s data. Therefore they control the future. They are more powerful than governments, they have more say than authorities, and they have more wealth than entire countries.

So where am I going with this, and why is it relevant to surfing?

What if I told you that cryptocurrencies and blockchain technology could solve most problems you can think of in the surfboard building industry?

Let’s run through a few examples.

Problem: The pricing of surfboards is all wrong.

There’s a slim mark-up between what we pay and what boards cost to make in time and money. The craftsmen – the shapers, glassers, laminators, sanders, artists – none of them are adequately rewarded for their work. It’s barely financially viable. Cheap, mass-produced surfboards are drowning small-scale talented shapers. Mass production dilutes and cheapens the market.

Blockchain solution: Trustless, automated transactions between suppliers of raw materials and shapers saves money and time. Greater efficiency ensures everyone gets paid. A direct line of sale between the customer and the craftsman is possible instantly, from anywhere in the world. Distribution channels are streamlined or erased. Fewer middlemen exist. Distributors, shops, sales reps, banks – all are superseded by a blockchain. Therefore less money is paid to intermediaries and more remains for the board builders and the customers.

Problem: Everyone steals or borrows each other’s ideas.

Inexperienced shapers simply undercut those above them, prepared to operate at a loss to get ahead. Boards are copied relentlessly from Instagram or stolen/shared/procured CAD files. The originators of new technologies, constructions or designs are unclear and the true benefactors are rarely rewarded.

Blockchain solutions: Every time a board is made, the data about that board is committed to a blockchain, where it stays, forever unaltered and transparent. An immutable record of who designed what and when. No copying, no piracy, no undercutting. Use of CAD files or other people’s designs could trigger Smart Contracts (algorithms which execute automatically) which means that the owner of the creative asset is immediately rewarded every time someone uses their design.

Sounds like pie in the sky, right? But all of this can happen now. The technology is here.

There are other, more creative solutions utilizing the same technologies, in surfboard construction and the wider surf industry. But you don’t expect me to give all my ideas away for free, do you?

Imagine a world with no middlemen. No corporations. No disputes about money, or ownership, or records, or promises. A world of truths and proofs and fairness. A world where the currencies we need are not controlled by faceless central authorities, but by us. A world which has parity for all.

And if that’s too much of a stretch, just imagine a world with cheaper, fairer surfboards. That’s a world we can all get behind.

Editor’s Note: Opinions expressed by contributors are their own. The author owns positions in Ethereum, Neo, Cardano, and several other cryptocurrencies.