The Women of Mavericks: Savannah Shaughnessy and Sarah Gerhardt 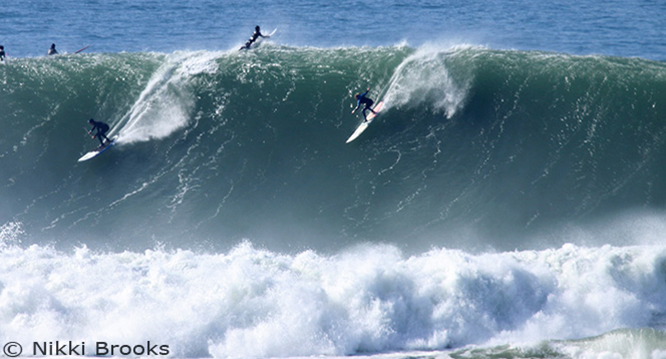 Savannah Shaughnessy (USA) is the only female big wave surfer selected for the Titans of Mavericks competition’s Round 2 draw. Photo: Nikki Brooks

Mavericks surfers are titans. They are strong; they are brave; they are the real deal. Two women in particular are pushing the limits of female athletics by surfing one of the most challenging and dangerous big wave spots on the planet. Savannah Shaughnessy and Sarah Gerhardt are local Mavericks chargers from nearby Santa Cruz. They not only make a name for themselves in the big wave lineup but also open opportunities for women in sport.

Titans of Mavericks, the official big wave surfing event, festival and lifestyle brand in Northern California, hosts an official competition window at Mavericks from January 1st – March 31st each season. This year’s new selection process announced a Round 1 draw of 56 surfers who were considered as worthy competitors. Both Savannah and Sarah were included on that list.

Furthermore, they were not separated from the men to compete in a “women’s heat,” but rather considered to paddle out alongside the men as they do during a typical Mavericks swell. Yet, this time, there will be money involved and millions of people watching.

Savannah Shaughnessy and Sarah Gerhardt, the Mavericks women who dare to surf the world’s most dangerous wave, were featured on Off the Lip Radio Show recently. Watch the October 14th edition right here:

The life-threatening challenges a surfer faces at the infamous break are very real. Two of the strongest watermen were lost to Mavericks’ dark abyss – Sion Milosky and Mark Foo, causing many big wave surfers to take a step back before risking their own lives to challenge Mother Nature at its most ferocious deep water state.

A “maverick” is commonly defined as “an independent individual who does not go along with a group.” Sarah Gerdardt fits accordingly. She was the first woman to surf Mavericks on February 24th, 1999. Then she broke a new record as the first female stand-up paddler to ride Mavs, and also the first woman to tow-in. Fair to say she’s leading the charge.

Sarah Gerhardt was the first woman to drop into Mavericks. Photos: Frank Quirarte

Santa Cruz native, Savannah Shaughnessy, is the only female big wave surfer selected for the Titans of Mavericks competition’s Round 2 draw.

She became the first woman to judge a Big Wave World Tour at the Mavericks Invitational contest on January 24th, 2014. Savannah went on to compete in the second-ever full women’s heat at the BWWT Nelscott Reef event, Dive N’ Surf Oregon Pro, in Lincoln City.

“It’s a rare double for any big wave surfer, but particularly a woman,” reported the Santa Cruz Sentinel. Her experience in the lineup has earned her respect amongst the big wave elite, both men and women.

Off the Lip Radio Show features legendary surfers and skateboarders in their Santa Cruz, California, studio. You can listen in on KSCO 1080AM radio in the Bay Area every Tuesday evening starting at 7pm PST. Now, you can watch the YouTube Live stream from inside the studio on TheSurfChannel.com.