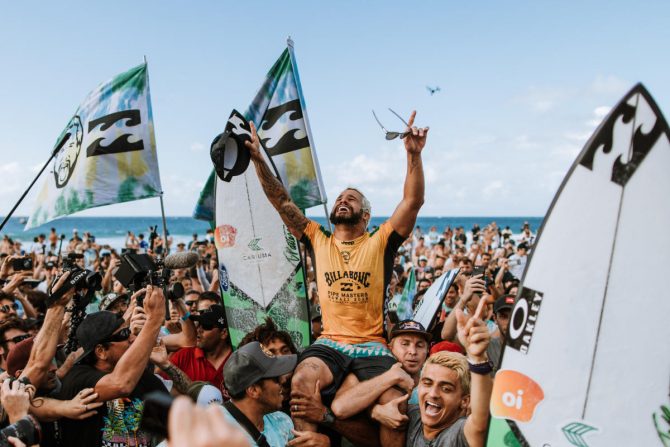 Italo Ferreira won the 2019 CT Title man-on-man, in the final heat of the year, the first time those factors worked together since 2003. Photo: WSL / Ed Sloane

Like many sports, some moments in competitive surfing aren’t always watchable. But you, me, and the WSL already knew that. Forget that approximately 98 percent of the global audience for a Round 2 heat at the Oi Rio Pro is comprised of people who showed up on the beach just to be a part of the madness – it’s a coin flip if many of us will even tune in until Finals Day at Pipe. This is because, from a viewer’s standpoint, competition is a highly-important, yet fluid part of the equation. How fluid? According to the WSL, 2019’s Medina vs. Italo winner-take-all Pipe Masters final was the first time fans got to see a two-man surf off with a title on the line since Kelly and AI did it in 2003. Drama at the finish line of the Dream Tour is that rare.

“Crowning world champions is the most important thing the WSL does,” League CEO Erik Logan said Tuesday, teasing the WSL’s new plan to manufacture some drama and give the world more scenarios like last year’s Pipe showdown. “The impact on the performances, the fans, and the entire surfing world of having a head-to-head world championship heat was palpable. And this impact wasn’t just a feeling. This was the largest, most consumed heat in the history of professional surfing.”

The X’s and O’s of the league’s new “ultimate Finals Day” haven’t been laid out yet, but the promise is clear: world titles will be decided between surfers in the water, not on the beach, resulting from a new playoff-like seeding structure through the season that steers the highest-ranking competitors on a course toward each other in the final heat of the year, rather than allowing 16-year gaps to separate title-deciding heats.

“I was glued to Pipe last year sitting on the yard on the last day, like ‘I can’t wait to just watch the final heat,'” says CT surfer Conner Coffin. “So, it’s just a great moment for the sport, and it’s exciting to think that from 2021 onwards that will always be how the world title is decided instead of the potential of someone winning it while that person is sitting on the beach.”

But professional surfing can’t always offer that to fans. Most of those factors are not controllable. The WSL has always had to rely on its audience to care about factors that have little to do with competition. We, as fans, have had to be so well-informed from an insider perspective over a yearlong period just to feel invested. We have had to care enough about the athletes themselves to show up on the beach and maybe catch a glimpse of them in person. Most sports aren’t “watchable” because the average fan isn’t knowledgable about those things. No, sports become must-watch when the competition is part of a developing story, unspoken or not. And high-functioning leagues create ways for casual fans to become rabid ones.

The NFL is not relatable. Those are the most freakish athletes on the planet playing a game that, from a strategic standpoint, is mind-numbingly complex. Yet the Super Bowl is the most-watched sporting event on the planet every year. The same goes for most Olympic sports every fourth year. Nobody cares about the actual complexities of gymnastics or swimming events enough to tune in outside of Olympic competition unless they A) once competed at a high level themselves or B) …ok, there actually is no B. When it’s time for the Games, though, people (used to) tune in. And even if the Games’ broadcast numbers have taken a dive in recent years, it’s a safe bet most of those sports still get an infinite spike every four years to their typically non-existent visibility.

Soccer is the most popular sport on the planet? Yeah, technically. I guess. It’s also historically either the only high-level sport in many parts of the world or has a cultural stronghold in places because it was the first prominent professional sport. And that’s why fans care so much about it, not because of the “action” (that word makes me laugh when thinking of soccer). Place it in America where people have other viable options, and from my POV, soccer is not a compelling choice. Globally, fans aren’t passionate about the game because there’s something intrinsically great about it (trust me, there is nothing great about a culture that willingly and regularly celebrates ties), they care because they have an attachment and affection fueled by the social circumstances around it: regional pride, tribalism and belonging, historic relevance. But attracting casual fans? I wouldn’t dare miss slamming five beers through 83 seconds of stoppage time in a room full of body-painted faux fans during a World Cup Final. Why? Because something’s at stake during that match, and the energy in the room will be infectious. Drama is the number one reason people watch any sport, and the WSL just made their sport infinitely more watchable by heightening the drama at the conclusion of each competitive year.

Now here’s the caveat, the plot twist, or maybe just the key question: will it work?

If your assumption in asking that question is that “working” equates to a more compelling product and fueling the passion of the fans who are already most likely to watch on Finals Day, the answer is: absolutely. Finals Day at Pipe will be incredible moving forward. But if your assumption is that the WSL’s barometer of success depends on whether or not they get more people to care and watch, the answer is…probably.

In recent history, the two parallels to the WSL’s announced format come from NASCAR, which implemented its Chase for the Championship back in 2004, and NCAA Football’s shift to a four-team playoff in 2014. The inspiration behind those sports evolving was more or less the same, looking to make sure the last hoorah of a long, grueling season was more than just a proverbial victory lap.

College Football used to have no championship game at all, instead having its 100+ Division 1 programs play out their 10-ish game seasons, celebrate the few who punched their ticket to a prestigious bowl game — which was really just an expensive exhibition — and watch who the coaches and press vote as top dog when it’s all said and done. The best in the nation was rarely, if ever, decided on the field. The move to a four-team playoff in 2014, however, has been a cash cow for the NCAA. The Rose, Sugar, Orange, Fiesta, Peach, and Cotton bowls, plus the national championship game — the contests that make up the College Football Playoff — paid out a combined $549 million to conferences and schools in 2018-19, according to USA TODAY Sports. The other 33 now-pointless bowl games paid out $99 million combined in those years. People watch, go to, and support the playoff system that provides a clear winner by an astonishing margin.

Meanwhile, NASCAR’s Cup Series is probably most similar to what a new Dream Tour looks like competitively. In 2004, the stock car championship circuit moved from an aggregate points scale (similar to how the CT operates now) where the overall winner was crowned, often with an anti-climactic finish. In its place, they’ve since instituted a midseason cutoff point where sixteen drivers compete for the championship in the final ten races of the Cup Series. Everybody in the series still races, but the ante is upped for the 16 drivers in position for a championship, and NASCAR instilled rules that would protect non-championship-eligible drivers from sandbagging it down the stretch. The playoff format has seen some changes through the years with a massive popularity surge and the sport’s highest overall viewership coming in 2005, immediately after the first playoff-style year. But more than a fair share of critics have pointed out for years now that the sport is losing its core fan. The playoff format is credited with helping the sport grow, as is the Heads of Championships format, which made the points system even less valuable and, just like the WSL’s new initiative, does more to ensure a championship is decided in the year’s last event. But the one caution WSL decision-makers might want to take from NASCAR’s history is that the changes didn’t stop at creating a playoff. A bevy of evolving rules and adaptations to the competitive format through the years have also been at play, which, logically, changes a sport entirely over time. People have lost touch with what they once loved because it’s no longer familiar. And for a sport that is historically sponsor-driven (sound anything like the surf industry?), a noticeable drop in revenue and visibility has plagued NASCAR for a while now.

Lucky for you and me, we don’t have to fret over how decisions impact the bottom line as much as we get to sit back and enjoy the tour leaving Europe with a championship still in the balance. And I’ll gladly take that.