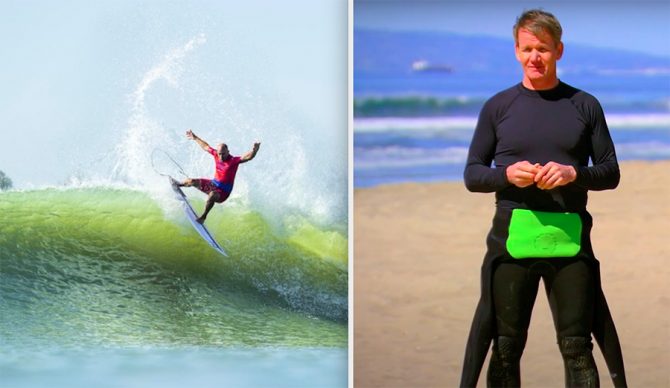 What happens when an undisclosed number of professional surfers picked to compete on Kelly’s Frankenwave stop being polite and start shredding for real? The Ultimate Surfer – a WSL joint – aims to answer this very question later this year on ABC. As a starved supporter of competitive surfing, this is fantastic news! But as a closet reality show fan, I am worried that The Ultimate Surfer, a reality show about surfing, will focus too much on surfing.

No one watches reality TV for whatever loose premise or goal they devise for the cast. The bustling t-shirt shop of The Jersey Shore, du jour real estate markets on Selling Sunset, and nuances of the winning dish on Hell’s Kitchen are mere backdrops setting the stage for what really matters: members of the cast issuing delicious takedowns.

The surfing in the WSL’s latest endeavor is guaranteed to be good, with the winners slated to compete on the world tour. But how good the barrels are doesn’t really matter here – reality shows need drama. And, more importantly, they need characters willing to meltdown on camera. Unhinged psychopaths are the lifeblood of any reality TV show. Unfortunately for ABC, the most off-the-rails any given surfing altercation gets is two guys yelling “BRO” at each other with steadily increasing volume until they exchange a few sandy slaps on the shore. Not exactly great television.

As hilarious as it would be to have Kelly Slater descend a spiraling staircase in his Lemoore mansion to award a rose for the most eligible male and female surfers each episode, it would make for much more engaging theatre if instead Slater lost his damn mind and yelled at everyone like they stole his Christmas presents. This is not going to happen, though. Kelly may have Ozzy Osborne devouring a bat’s head in 2020 levels of insanity in the water, but once he’s on land with a camera in his face he’s just, well, Jimmy Slade.

With what could be scarce surf drama on the shore (unless Daddy Medina shows up to encourage the contestants to burn one another), an immediate emergency phone call should be placed to Gordon Ramsay. He is an experienced contest-based reality show veteran and the perfect cohost to inject the kind of ire filled scream-alogue needed to make this venture successful.

Imagine if you will a WSL hopeful under-rotating an air reverse, resulting in a wipeout. Gordon proceeds to accost them onshore, getting within inches of their face before berating them like a plate of undercooked parsnips. Afterward, Ramsay informs a former San Clemente prodigy, coddled since his or her teen years, that their maneuvers would not even be served at the surf break equivalent of Jack in the Box.

HELL YES! Bring me all the popcorn and Tecate my unemployment checks can provide. I’m absolutely tuning in to watch a raving lunatic’s criticisms turn a pro surfer’s confidence into chicken stock. I want those moments of manufactured rage and the resulting emotional devastation hooked to my veins. I could care less who wins the contest in the water – my emotional investment would be in who could withstand an angry Scotsman raking them over the coals for eight consecutive episodes.

You expect Kelly Slater. You expect great surfing. You expect the typical tropes of partying and King-of-the-Wave machismo. But you don’t expect an adult learner giving hemorrhoid-inducing critiques to accomplished surfers. Reality shows are at their best when they’re loud and absurd, and having Gordon Ramsay around to scream at a bunch of surfers not used to getting treated in that fashion is the exact kind of zany, backward stunt The Ultimate Surfer needs to make it truly great.