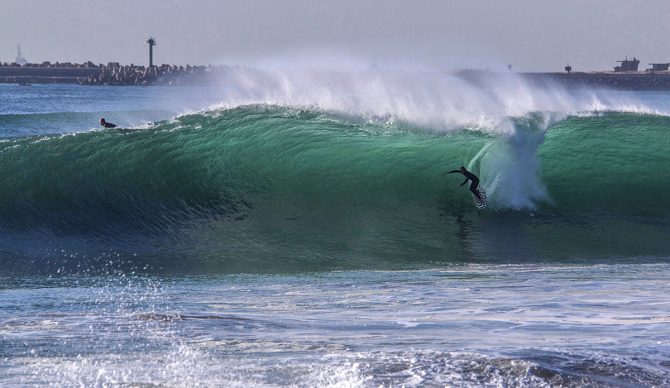 New Pier perfection and Rick Basnett on a bomb. © FLANAGAN

Rated as a World Surf League specialty event, Durban’s Cell C Goodwave contest has a one-year waiting period, costs one Rand (75 cents USD) to enter, and has a massive first prize of R100k ($75K USD). It’s the largest domestic prize for the sport in South Africa. Contestants need to have a 1 Rand coin to enter on the day (no change will be given) and no entry fee paid means no surfing.

It is a one-day event with four man heats and sudden death elimination. The competition consists of fifteen heats of with the event getting a green light on the advice of surf forecasting guru Spike. Contest organizers are looking for a solid and consistent swell that will provide between 10 and 12 waves every 30 minutes for eight hours in order to run the event to completion. All that calls for a very specific kind of swell and Spike knows exactly what that swell looks like on the maps.

Right now, we have a blip on the radar and Spike has given the contest organizers an early heads up starting May 15. While that swell is still far off and many things could change between now and then, all invited surfers are reminded to be on alert and watch the Cell C Goodwave website and Facebook page for updates.

“Winter is starting to show some muscle with a series of big swells hitting the Cape,” Spike said of the upcoming conditions. “For Durban, two storms form east of the country, both producing some swell. The first arrives Monday and Tuesday 15 and 16th, and the second next Friday the 19th. With two days of surf and offshore winds, we are looking closely at the originating storm, which at this stage is facing slightly the wrong way for proper 6-8′ surf in Durban. However, it could be clean 4-6′ building Monday and running Tuesday, which looks the best conditions and swell direction.”

“We are all very excited to be running this unique event again,” said South African Surfing Legends Executive Advisor Barry Wolins. “There aren’t too many specialty events that take place these days and we have our one at New Pier, one of the finest, barreling beach breaks on the planet.”

Invited surfers, in no order:

Alternate surfers, in no order:

The Cell C Goodwave – in loving memory of Lee Wolins.