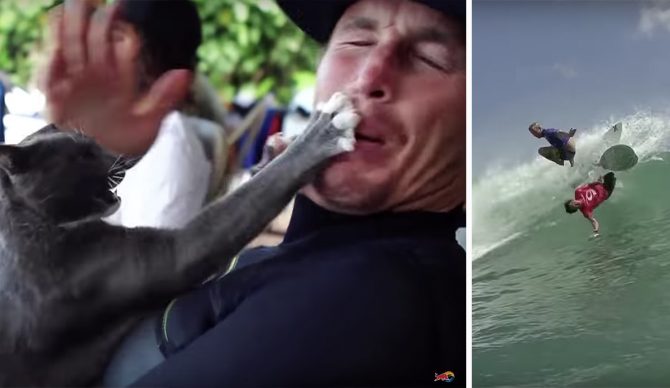 How many bones do you think were broken through eight seasons of this? Photo: Red Bull

A little over a week ago, the folks at Red Bull threw a party for Jamie O’Brien on the North Shore of Oahu. They gathered a handful of people, including some that had been along for the ride from day one, and did what you do when you want to have a shindig on the North Shore: serve them drinks at Turtle Bay Resort’s Surfer the Bar. Then they did the next logical thing when you want to commemorate a person and ensure their tribute is given in the most eloquent fashion: hand a microphone to Sal Masekela.

Sal proceeded to do the very thing he does best, giving context to the weight of Jamie’s contribution to surfing. He painted a picture of the surf world pre-Jamie O’Brien turning on a camera and reminded the room there was a time when every athlete with a contract wasn’t concurrently producing their own personal vlog on Youtube. O’Brien’s success blazed a trail for the rest of them, and the more laughs Masekela got out of the group, the deeper its significance started to sink in. In all fairness, most of those laughs were at Poopies’ expense, which is pretty fitting anyway if the point of the evening was to celebrate the official end of Who Is J.O.B.

And then Masekela dangled a carrot. The cue cards in his hands, he admitted, had some fascinating facts about the show we’ll all look back on as the beginning to the surf vlog boom. These are the Who Is J.O.B. statistics you never thought you’d learn. Some of them surprising. Some of them funny. Some of them eye-opening: