This Is Balaram Stack, a New Yorker Whose Surfing Applies Everywhere

Balaram Stack has one of the most interesting stories in surf. He was raised in Long Beach, just outside New York City. While the waves get really fun on this stretch of the Atlantic, it’s not necessarily considered a hotbed of surfing talent. To get good, it takes serious dedication and a thick wetsuit. Balaram had both growing up. And his family sounds awesome, too. His mom was a hippie in a clan of straight arrows. She bestowed upon Balaram a unique name and a wandering heart. Which is a good thing for fans of surf. He’s really fun to watch in the water no matter where he’s at in the world.

Filmmaker Gabe Reuben and I caught up with Balaram this winter at the Volcom House on the North Shore (Gerry’s old place). He talked about his background, and how Oahu has become a second home to him. He’s done his best contest surfing at Pipe, where he’s worked his way into the lineup at one of the scariest waves in the world, which is no easy task, especially, one would think, for someone from New York. But Balaram makes it look easy.

Currently, the 26-year-old is recovering from hip surgery and watching too much Netflix. So I got the download on his recovery, too:

So you just had surgery?

It was something that started when I was 15 or 16. I didn’t know it until about 18 when it really started hurting. There was a lump on my femur that grew and pushed on my labrum in my hip. It just kept getting worse over time. I couldn’t sleep at night, it was aching constantly. So I just took care of it. There was a piece of labrum on my left hip that got shredded to pieces right above the femur. When the growth plates opened I overworked it, that’s why an extra bone grew on it. It was only getting worse so they removed that part of the bone by shaving it down and repaired the labrum with something like three sutures.

When will you be able to get back in the water?

The doctors are saying three-four months. I don’t know, though, it feels like a little bit sooner. I’m feeling pretty good.

The gym seems like a pretty foreign environment to a lot of surfers.

When I’m recovering, it’s not hard to go to the gym or trainer and really push it. I have no other obligation but to get back to surfing. That’s where my mind is–I have an acupuncture guy I see in the city, there’s a masseuse hooking me up and then physical therapy. 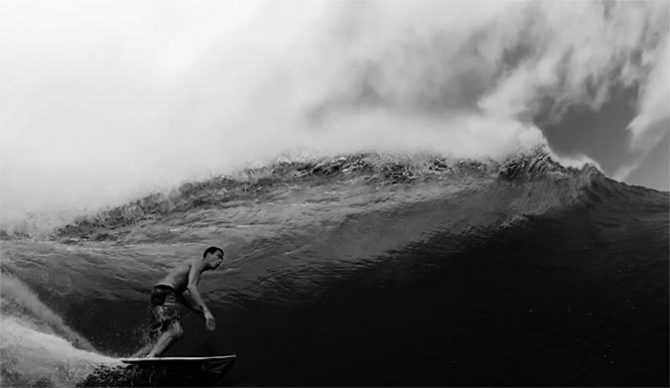 The East Coast had an insane winter of surf. Were you able to get some of that before, you know, the knife?

I lucked out pretty hard. I came home from Hawaii and decided to have surgery April 3. From that time on I didn’t have to leave home more than once or twice. It was firing the whole time. I felt like there were two swells a week with good wind. I can’t remember it being like that for a long time, if ever. Everyone was flying out here to surf from Cali and Canada and Hawaii.

Was that kinda weird, having the East Coast become a bit of a destination?

I had a couple of buddies stay with me for a while. It’s cool when people come through. You’re not seeing a ton of people around, regardless, so it’s a fun time when it’s like that.

What do you do with your downtime since you’re pretty laid up?

Watching TV for the next three months. I’ve watched so much Netflix. Wild, Wild Country (about Bhagwan Shree Rajneesh and his cult following in Oregon) is pretty sick. Other than that I’ve been icing, going to therapy and trying different restaurants every night.

What’s the first trip you’re doing once you can get back in the water?

I’ll definitely be trying to get on the first trip I can to the South Pacific or wherever it’s good. The ideal first trip is to go somewhere where I can get barreled.