This Is the Seasuit, a New Modest Wetsuit Inspired by Iran’s Female Surfers

Picture the Middle East, where in some countries women must follow strict laws to cover every inch of their bodies except for their face. Can you picture these same women, fully garbed, out in the Indian Ocean surfing monsoon swells?

It seems a bit difficult – all that fabric getting weighed down by the water, tangling up and causing potential safety hazards. Not to mention the overheating of surfing in a region where both the air and water run about 80 degrees.

If you’re having a hard time picturing Middle Eastern surfers, let alone females, that may be because across the Middle East and North Africa, most sports are heavily male dominated. A women’s sport has never been broadcasted on Iranian television. It wasn’t until 2019 that women were even allowed in stadiums.

And it wasn’t until 2013 that outside of those stadiums, the surf scene caught on – particularly in Baluchestan, a remote region in the south of Iran. Now in 2020, we see the emergence of a unique surf culture that originated with females, led by Irish surfer, Finisterre ambassador and marine social scientist Easkey Britton who became the first woman to surf the waves of Baluchestan back in 2010.

“In this case, surfing is a sport that’s been initiated and led by women — that is a bit unusual. Because it’s not a traditional Iranian sport and hadn’t been done before, there were no rules defining how it could and couldn’t be done,” Britton told Vice.

To comply with the local culture, Britton dons leggings, board shorts, a baggy t-shirt and a hijab—all just to ride a few waves while trying not to overheat. She knew that in order to provide greater access to the sea for local females, proper surfwear would first have to be more accessible.

What ensued became a collaboration among women to create the Finisterre Seasuit, including Britton who brought the idea to Finisterre and collaborated with Iran’s first female tri-athlete Shirin Gerami to outline cultural and functional requirements. Finisterre’s product director Debbie Luffman who instructed nearby university students to create a modest, yet functional and unique suit. Falmouth University’s Synne Knutson, who generated the first design of the suit, which was further developed into the first prototype by Finisterre designer Rachel Preston. And Plymouth College of Art’s Ayesha King, who created the printed pattern, inspired by the power and movement of water.

“I love the way that the sea leaves linear impressions in the sand, displaying the relationship of the land and sea. The sea is a way of connecting people from all backgrounds and beliefs, and the flowing lines in this print captures that idea,” King told me.

King incorporated multiple techniques to take the focus away from contours of the body. She shared, “The purpose behind masking the contours of the body through print is to make surfing much more inclusive for different religions or personal preferences.” 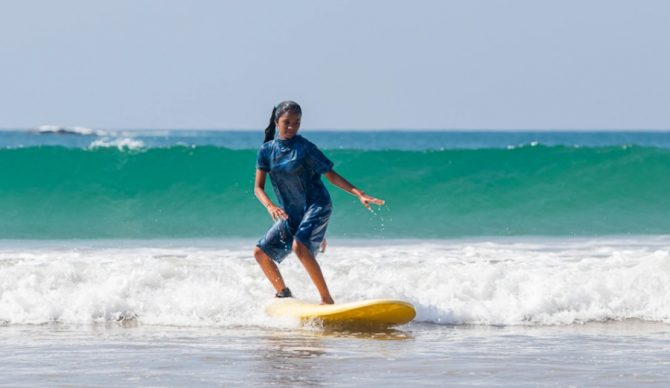 The Seasuit in application. Photo: Finisterre

With traditional wetsuits being form-fitting to the body, this suit aids in body confidence, as well as for women who prefer modesty but are sensitive to the sun and need a full coverage suit. “It happens across sports in general, girls in their teenage years fall by the wayside in terms of participation. There are a whole load of reasons for that, but one is body image,” Britton said in a Finisterre release. “The portrayal of what a female surfer should look like is pretty limited in the media. There should be lots of options of how to look in the water, and the Seasuit can facilitate that.”

Luffman elaborated on this point when we spoke: “Female surfing is still often over-sexualised…There is also a lack of diversity for female surfers, again leading to mis- or under-representation to inspire younger surfers to grab a board and go and have fun in the ocean.”

The final tester suits, built by Makers HQ, were tested by Britton and Gerami at the Bristol Wave before sending out prototypes to various communities across the Middle East and Asia. Luffman shared that post-lockdown, Finisterre plans to continue testing the prototypes with a global community of surfers for any refinements before producing a small run of commercially-available suits for purchase on the Finisterre site.

The brand originally planned to use the 2020 Olympics to promote and test the Seasuit as a global means to access the ocean, but the event’s cancellation and the current pandemic have momentarily halted the project. “For Finisterre, the inclusion of surfing in the Olympics represented an opportunity to put surfing on a global stage, allowing for greater diversity and showing surfing in a positive light to inspire more people from all backgrounds to get into the sport and to get into the sea,” said Luffman.

Luffman anticipates that the Seasuit design will be finalized later this year, and hopes to make it available for purchase in 2021.