This Is the Story of the First Russian Surfer 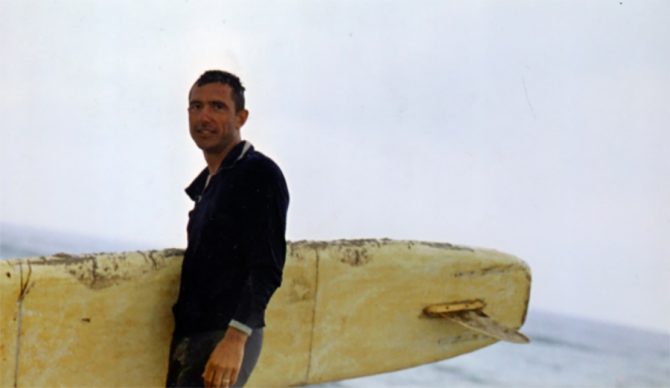 Many consider surfing to be a sport of freedom. The former USSR, as a country, was kind of the opposite of freedom. So would you have ever imagined that there was surfing in the Soviet Union? Well, there was (and still is). The first known Russian surfer was Nikolai Petrovich Popov. He was born in the USSR and surfed his first wave in Crimea in 1966. This is his story.

Nikolai Petrovich Popov was a student at the Faculty of Geography of Moscow State University and captain of the alpine skiing team. How did he even know about surfing?

Back in the 1960s when Nikolai was studying at the University, he read a book by Jack London, The Cruise of the Snark. The protagonist of the story managed to travel across the South Pacific and visit Hawaii. Nikolai was impressed so much with London’s description of riding waves that he was determined to give it a try. Even though at that time he had no opportunities and in the USSR, hardly anyone knew about surfing.

At the time, the USSR’s borders were closed and the Iron Curtain was imposed to prevent not so much the invasions, but the escapes. And the same applied for information. The country was totally controlled by the government. But Nikolai had landed a job working as a journalist in the Soviet news agency Novosti that had affiliated offices around the world.

“The only sources of information about surfing at that time were American magazines, which I managed to get through friends and colleagues who worked abroad,” he told me. “The magazines were old and shabby, obviously, I was the last one in a long line to read them. Thanks to them, I got an idea of ​​how to do everything.”

So Nikolai decided to pursue his dream of riding waves. He learned about boards from those American magazines and asked his friends from the Department of Oceanology to help him find a suitable place for surfing. “They said that the best place to catch waves was in Crimea,” he said. “After some calculations, they pointed to a specific point. It turned out to be Cape Tarkhankut, thanks to the shape of the bay and the steepness of the coast. There was a big chance to catch a wave.” 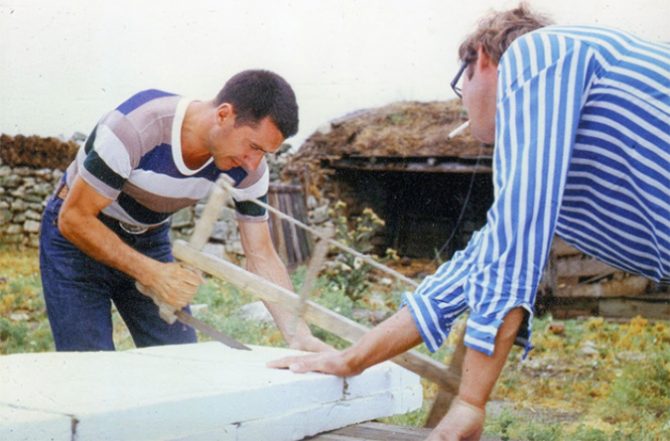 Nikolai and his friend Vladimir Prozorovsky working on their first board. Photo courtesy Nikolai Petrovich Popov

In the summer of 1966, Nikolai Popov and his friend Vladimir Prozorovsky got together for a surf expedition to the Crimea on the Black Sea, southeast of Ukraine. “At that time buying a surfboard wasn’t an option so we decided to shape it by ourselves. I found foam plates 15 centimeters thick and of a suitable length. We loaded them on top of the car and departed to Crimea. Upon arrival at Cape Tarkhankut, my friend Vova and our wives, Nadya and Nina, stopped in a small hut on the coast. In the backyard, we glued three plates with epoxy and shaped the board using knives and saws. Then we wrapped it in fiberglass, again smeared with epoxy. The fin we made out of plywood.”

“Crimea has good opportunities for surfing,” Nikolai continued, “but swell doesn’t come often. We spent four days waiting for the waves, being so excited that we could hardly sleep or eat. Finally, on the morning of the fifth day, Vova heard the sound of breaking waves. He jumped out of bed, woke me up and we ran down to the shore. The waves were really good, so we paddled out. We had one board for two of us so we were riding in turns. The board we made turned out to be very strong, we did a good job. And we were really lucky to have surfable conditions for the next three weeks, up to the end of our vacation.” 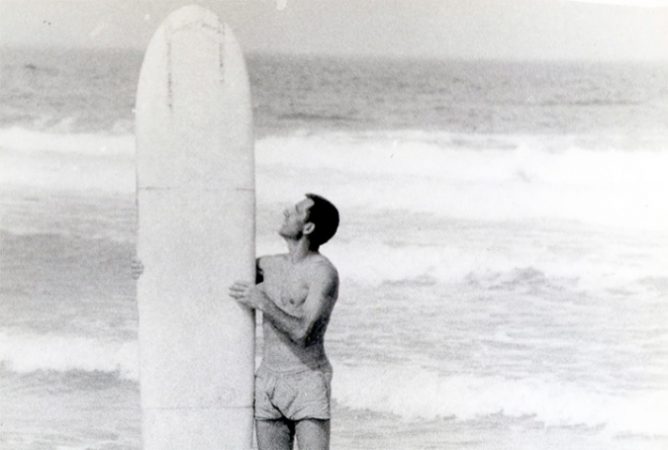 1970 – The first Soviet Surfer in California

Four years later, Nikolai Petrovich, who was then working for the magazine Soviet Life, went on a business trip to America. As a journalist, he had to follow an exhibition called USSR: Country and People in Art Photography, which was supposed to take place in several cities, including San Francisco and Los Angeles. Of course, he couldn’t miss the chance to combine work with his favorite pastime: riding waves. “From the very first day in San Francisco, I immediately started looking for surfers,” he said. “Very soon I found local guys, typical hippies. They were pretty amazed by me but very friendly, loaned me a surfboard, invited me to surf with them, and showed me everything. So I surfed for a month on the West Coast, near San Francisco at Stinson Beach. ”

Since then, Nikolai Petrovich has spread the word about his hobby and even wrote an article about surfing for the science magazine, Technology of Youth. At that time, it was the most advanced and popular Russian magazine from which readers learned about innovation. The chief editor was himself an athlete, so he was happy to publish Popov’s texts. This was 1975, and it was the first article about surfing to appear in a Soviet publication. 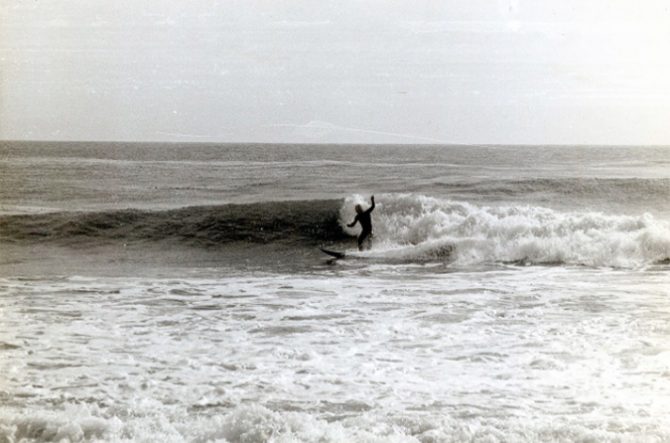 About this time, Nikolai turned his attention to exploring new breaks. He set his sights on the Sulak Reserve to the north of Makhachkala on the landlocked Caspian Sea. It was a protected area, so he had to send a letter to the Central Committee of the All-Union Leninist Young Communist League, asking for permission to visit the reserve. “They looked at me like I was insane,” he said. “But I didn’t care, I just wanted to get permission. At that time you could open any door if you knew the right people and had connections, so Vasily Zakharchenko, editor-in-chief of the magazine Technology of Youth, helped me. He wrote to the first secretary of the Dagestan regional committee of the Komsomol: ‘We ask you to provide Comrade Popov N.P. all kinds of support in his sports and scientific research.’ It was the first moment surfing was called a sport in our country.”

From 1975 to 1978, Nikolai Petrovich and his wife visited the Sulak Reserve several times. They became friends with the locals and received their unbridled support. The locals shared fresh food and drinking water. “Since 1978 I haven’t been able to surf anywhere,” he said. “Life and work took all my time, and interest gradually began to fade. And then it was even more difficult when in 1990, the country was in fact collapsing. I had to think about everything at once – surfing was no longer part of these thoughts.” 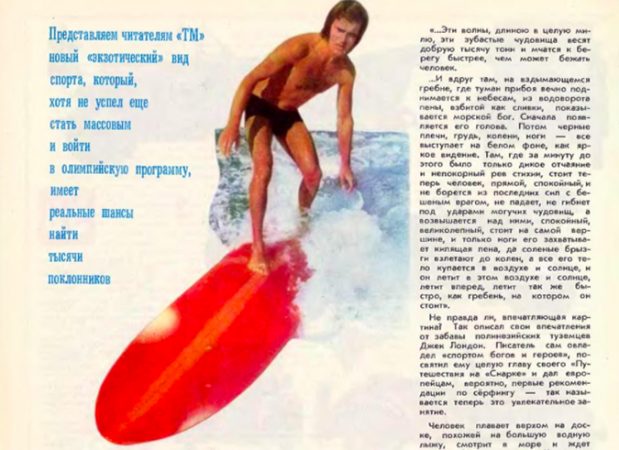 Nikolai Popov is now in his eighties and has the eyes of a man who was dedicated to a dream many who surf know – the far-off promise of perfect waves. His story is inspirational in Russia, proof that a person is capable of doing what one loves even if it seems impossible.

“Surfing is a unique sport, attractive, exciting,” he said. “In addition, it reconnects you with nature – sunrises, sunsets, wild shorelines, wonderful views. It was an unforgettable part of my life, an awesome life experience, and now I have something to share with the new generation. I will always say that surfing is great. I still get goosebumps when I remember the feeling of riding a wave. For me, these memories are precious.”

Editor’s Note: Iren Oraylie is a Russian surfer, writer, and editor who has lived in Bali since 2011.