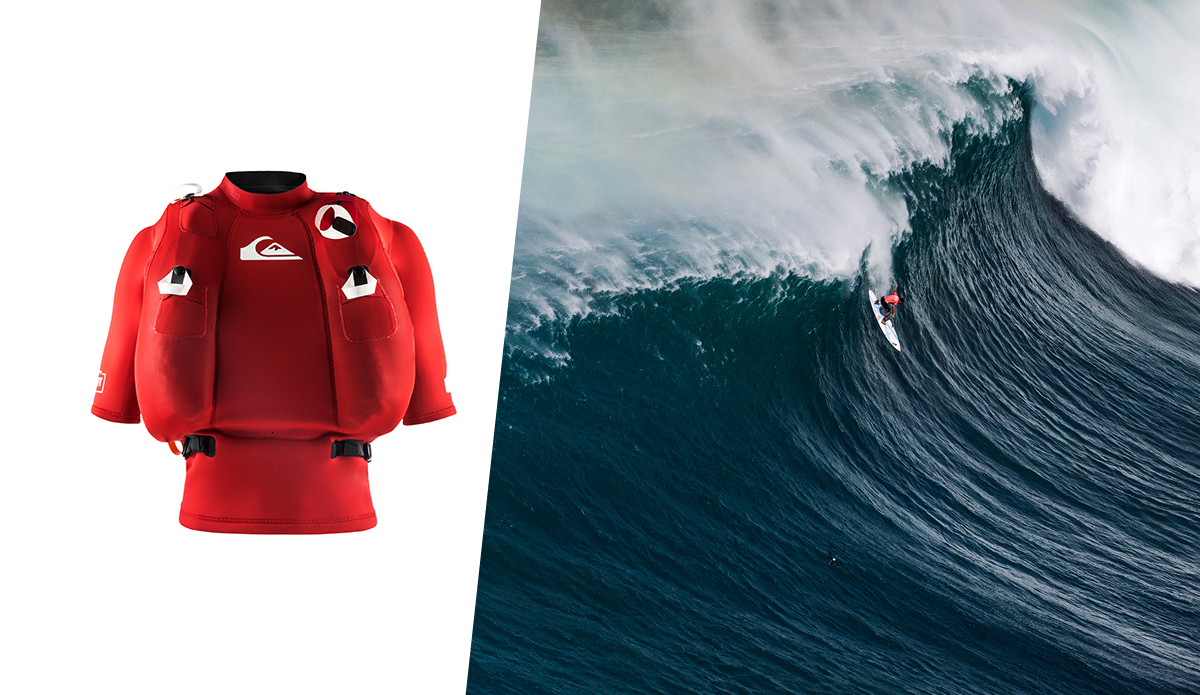 The Quiksilver Highline Airlift safety vest is designed to help save lives in situations like this one Koa Rothman finds himself in. Photos: (L) Quiksilver (R) Mike Coots

“What I love about big wave surfing is the adventure, feeling alive, and, most importantly, coming home.”

This simple statement from Maverick’s specialist Peter Mel outlines why he chose to join the team of innovators at Quiksilver and leading dive company Aqua Lung in 2013 to help design and test the Quiksilver Highline Airlift pull vest, the latest safety tool for big wave chargers worldwide and the official pull vest of the WSL Big Wave Tour. After a soft unveiling in France during the ninth Championship Tour stop in Hossegor, the vest was formally presented as WSL’s new go-to safety staple for the men and women who charged XXL swell during the third annual Pe’ahi Challenge this past weekend on Maui.

Watching Makuakai Rothman, Greg Long, and event winner Ian Walsh weather some of the heaviest waves imaginable during the historic contest showcased just why the vest underwent such rigorous testing over the past three years. As Mel explained during a presentation in France, over 200 people — including Tom Carroll, Ross Clarke-Jones, and Mel himself — tested the Highline Airlift all around the world in every possible condition. They surfed with it at Jaws, Maverick’s, Nazare, and Outer Reef Waimea (just to name a few), they jumped off of cliffs in it and dove the impossible depths before inflating it, all of which is standard testing for Aqua Lung products.

“I wore it earlier this year in Australia at Cow Bombie, I wore it on Friday at Mav’s, and here this morning,” said former World Tour competitor turned triathlete and big wave rider Clint Kimmins, who was at Pe’ahi over the weekend supporting Jamie Mitchell, who was also closely involved in the Airlift testing process. “It’s great because it doesn’t get too big under your chest, so you can still get low to the board. It’s just perfect.”

The placement of the bladders and CO2 canisters on the Airlift is an innovation that distinguishes it from several other big wave safety options in the market. The four cartridges (which can be 25g – 38g with a 3/8” thread) are stored in the back of the vest in an easily accessible pouch, and they are connected to bladders that inflate along the surfer’s torso and back, leaving the diaphragm unhindered for easier breathing and better comfort. A deflation tab allows for quick release of the CO2 to be able to dive under giant waves, and a tube at the top allows for oral inflation and deflation as well.

Pe’ahi finalist and Big Wave Tour rankings leader Kai Lenny first received a Highline Airlift at the 2015 opening ceremony for the Eddie Aikau Invitational on Oahu, and he said it’s been one of his go-to vests, especially due to its comfort level when worn over a wetsuit in colder water.

“A lot of times when you have all this gear on, the padded suits and everything, you can feel quite restricted, and surfing big waves that’s the last thing you want,” said Lenny. “Jaws, Pe’ahi, is one of those places where you can’t actually surf here on the level we are without some sort of floatation device like this. To be able to inflate and know it’s not going to pop under the pressure is super important because it’s pretty easy to drown out there. It’s pound-for-pound one of the heaviest waves on the planet. I got caught inside by a pretty big wave, and I got held down for a while [during the contest], but you just trust in the equipment that you have. When I pulled the canister I knew I just had to go on the roller coaster and know that I was going to float back up.”

So how does one of the world’s premier watermen stay calm when he’s getting worked by 40 foot Jaws sets?

“I think the way I keep calm is you’ve got to understand that you’ve got to go through the experience. You’re not getting out of it, so you just accept it. I always tuck my chin to make sure my airway is closed, and I try to just go with the flow and I trust that I’m going to come up…eventually,” Kai said.

During the France presentation, Peter Mel also noted how being able to rely on your equipment and the rigorous testing it has undergone allows a surfer to relax their nervous system during a wipeout and hold down, conserving their energy and not wasting any oxygen. Points of safety for the vest were refined each year as big wave surfers gathered on Oahu for the annual Big Wave Risk Assessment Group (BRAG) training. One of the many respected individuals who take part in that meeting each year is the well-known figure of Big Wave Dave, better known as waterman, lifeguard, and Pe’ahi water commentator Dave Wassel.

“Just coming home safe at the end of the day, that’s it. That’s 100 percent it,” Wassel said of the importance of pull vests and water safety knowledge. “So far it seems like this one doesn’t need to be worn underneath a wetsuit, and that’s a pretty big advantage with that waist strap.”

Quiksilver has reiterated that the vest is a safety tool, NOT a performance enhancer. Using it must always be coupled with in-depth water safety knowledge and strong swimming skills. Do not ever put yourself in a situation you wouldn’t be able to save yourself from and always use it with water patrol boats or skis nearby keeping an eye on you. The vest has been introduced to the public through a limited release in mid-October at surf shops near big wave spots in France, Portugal, Hawaii, and California, including Mel’s Freeline Surf Shop in Santa Cruz.