It started as plain curiosity. A lot like Peter Mel in the clip above, I turned to my friends in The Inertia office. “Why are Hawaiians recognized differently than Americans in the WSL?” I felt like I was left out of an insider’s secret. But, as it turns out, none of us knew.

We’d published articles in the past about how it is. I recently wrote about how Hawaiians have competed as Americans in the Olympics, how it’s distinct in surfing, and what all that might mean. But collectively, we never quite got to the bottom of how exactly this distinction came to be in the first place.

So, I began a little quest.

My first stop, the WSL – to hear it from the horse’s mouth, so to speak.

“Since 1976, the WSL (then IPS, then ASP) has considered Hawaii its own sovereign surfing nation so they receive a specific designation at WSL events and on the WSL rankings,” said Dave Prodan, the WSL’s VP of Communications.

Ok. That gives us a time the decision was made, and the idea that Hawaii is a sovereign nation in the eyes of professional surfing, but how did this come to be in the first place? Were there particular groups lobbying for separate recognition in Hawaii at that time? What was the historical context? The WSL declined to respond.

Next, I reached out to surf historian Matt Warshaw to help me cut through the fat. The fountain of knowledge that he is, Warshaw was able to provide much more context:

“Hawaii wasn’t a state until 1959, but even before that, when it was a US territory, it was SO far removed, geographically and just about every other way you can imagine, from the rest of America,” he said. “This was true with surfing, too. There were connections (Blake, Zahn, Downing, others, went back and forth), but Hawaii was very much considered to be its own sovereign surfing nation. It wasn’t even questioned, even after statehood.

“Hawaii was its own special place. So when contest organizers talked about an ‘international’ field at the Makaha International Surfing Championships [which ran from 1954 to 1971], surfers from Australia were from Australia, surfers from Peru were from Peru, but American surfers were from Hawaii, or California, or the East Coast — the whole ‘East Coast’ thing in surfing is a whole other interesting topic.”

Fast forward to more recently, and it gets messy.

“With the pros, it’s a little more complicated,” said Warshaw, “in that IPS founder Fred Hemmings also owned the Hawaiian pro contests — Pipe Masters, the Duke Classic – so when there was a war between Hemmings and Ian Cairns for control of pro tour surfing, and Cairns won (creating the ASP), Fred took his Hawaiian contests and basically went home. The Hawaiian events were not part of the world tour… So there again, you’ve got Hawaii separate from the rest of the world tour.”

All of this points to a sort of de facto separation between Hawaii and the rest of the “mainland” field. Neither Warshaw nor Prodan pointed toward a moment where a contingent of Hawaiians actively lobbied a governing body of professional surfing for separate recognition.

This distinction for some, though, has been a point of pride. Kind of like a nod to the fact that ancient Hawaiians were the pioneers of what would ultimately become modern surfing. And figures like Duke Kahanamoku, a Hawaiian, were its ambassadors. To complicate matters, the Duke did compete for the US in two separate Olympic Games. 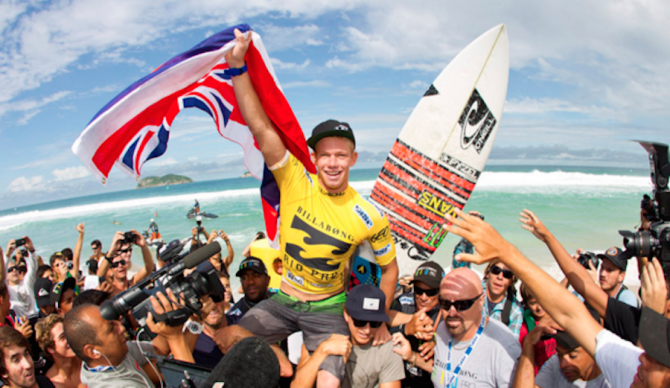 John John raises the Hawaiian flag in Rio. Even though it’s technically part of the United States, in surfing Hawaii has almost always been recognized distinctly. Photo: WSL

The reason it’s so confusing, though, indeed the reason I asked in the first place and likely the reason behind the confusion in the WSL’s comedic take on the issue, is for residents of any other state, it’s just that – a state. But unlike other territories in the mainland US (including Alaska), where you’re from isn’t inherently wrapped up in an understanding of your ethnic identity. I hail from California, but I’m not ethnically Californian. I’d call myself white or of German ancestry.

But even then, being Hawaiian and being Native Hawaiian are two different things. John John Florence was born and raised in Hawaii. He’s Hawaiian, but not Native Hawaiian. Surfers like Zeke Lau, on the other hand, would consider themselves to have Native Hawaiian ancestry. So the whole thing is painfully complex.

And now that surfing has officially become an Olympic sport, there are rumblings Hawaiians might seek separate recognition from the United States. It’s worth noting that the International Surfing Association that has worked tirelessly with the IOC for Olympic inclusion of surfing also recognizes Hawaii as a separate nation.

These are major issues and debates that the IOC bought into when it voted to include surfing in the 2020 Olympics in Tokyo. And like the pro surfing execs spoofed in the WSL’s video, IOC committee members may now find themselves hoping for pie in the conference room.