This Is Why I Started Wing Foiling 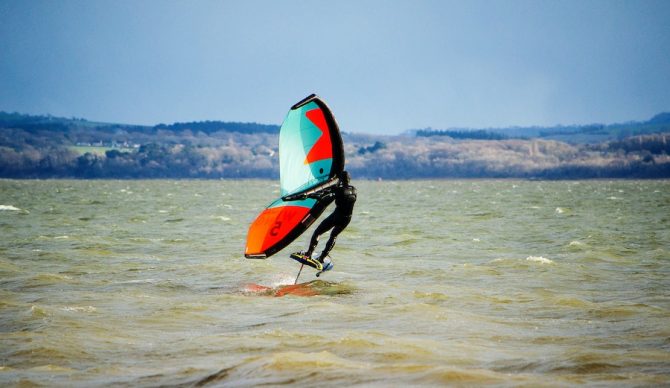 Spring means more wind and less waves, so why limit yourself to surfing? Photo: Uniqsurface//Unsplash

Here in San Francisco, spring means a few things, all of them negatives for surfers. The winter northwest swells start to fade, so the waves at my beloved Ocean Beach get smaller, the wind goes from offshore to onshore, and to cap it off, there’s fog. This spring, I decided that instead of pulling out my longboard to ride onshore slop, I was going to learn a wind sport. I chose wing foiling, and a month or so in, I’m having (almost) as much fun as I do in the surf. The learning curve is meteoric, exponential, even, and I’m a firm believer that it’s something every surfer should at least try. Here’s why.

Windsports and surfing work opposite each other beautifully – calmer winds are better for surfing, whereas wind is, obviously, better for windsports. I was also drawn to the fact that windsports are more versatile than surfing in that one only needs a body of water – any body of water – to do them, which, as a surfer, means I could conceivably spend longer periods of time away from the ocean without going crazy. Another plus for foiling is, unlike windsurfing or kiteboarding, foiling is relatively compact and approachable. And the crossovers between foiling and surfing can’t be denied. So when Slingshot, a windsports manufacturer from Hood River, Oregon reached out asking if I wanted to borrow some gear to give wing foiling a go, I instantly said yes. 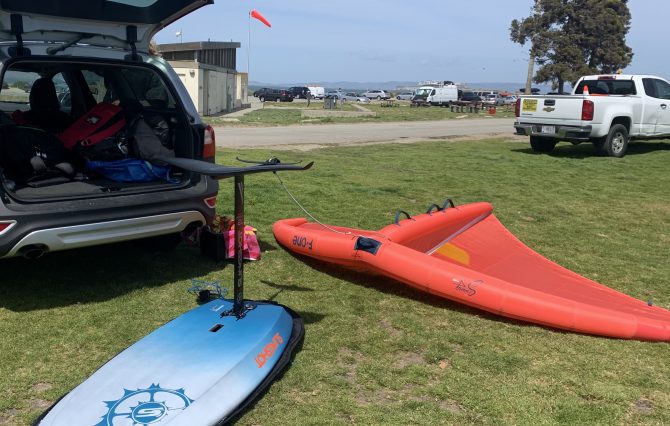 A board, foil, and wing is all you really need to get going. Pictured is the Slingshot board and foil, mentioned below, and a borrowed F-One 4.2 Swingwing for the windier days. Photo: WS

The gear I received and have been learning on is surprisingly simple. A 90L WingCraft board with a big, stable Slingshot foil (the PFI 835/710) underneath, a five-meter Slingwing V3, and I was ready. I’ve been venturing further afield lately, like up to the Golden Gate bridge, so I’ve been wearing a PFD because both my mom and girlfriend made me promise to (call me considerate).

I’m a little more than a month in of going about five to seven times a week and I’ve been reaping the rewards. It took me about a week to understand the wing and figure out how to get up on foil. By the end of the following week, I was riding for 20-30 seconds before falling. The week after I was riding basically as long as I wanted and staying upwind (the all-important breakthrough moment). I can now navigate my way from Crissy Field to the Golden Gate Bridge, carve and ride the bumps of windswell that come through, and can turn and go toeside maybe 70 percent of the time. And every day I get out there, I’m getting closer to the old guys who I see take off from shore and stay up on foil until they come back an hour later, stoked and satisfied. 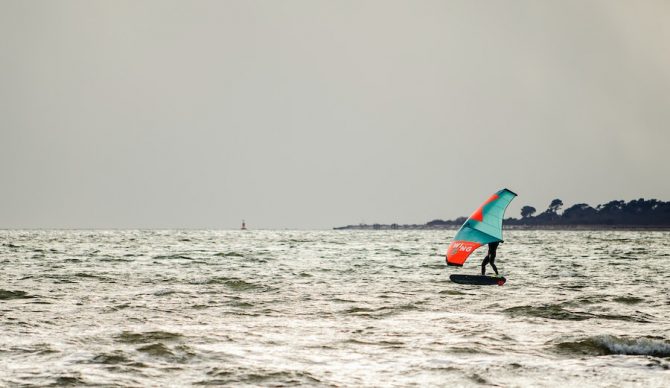 Conceivably, all you need is a body of water (fresh or salted) and some wind to have fun with a wing. No waves required. Photo: Uniqsurface//Unsplash.

The learning curve, although quick, is not painless. Until you can stay upwind, wing foiling downright sucks. If you can’t stay upwind, you’ve got to earn that potential downwind energy another way, like hoofing it up the beach while wrestling a wing in one hand and a foil board in the other with the mast digging into your shoulder. Oh, and it’s windy so everything’s flopping around, the wing and the board both want to go the opposite direction that you’re walking, your hair is in your face, and the frustration is compounded by other wingers trotting down to the water, launching, and effortlessly turning upwind. Meanwhile you’re out there, aimlessly drifting downwind while you try and figure things out. Thank god that stage was only a couple of weeks.

Every so often though, that windsports frustration will return, like when I breach the foil and fall flat on my face at 15 miles-per-hour. And as I’ve advanced, there are days where it’s just too windy for my five-meter wing and I’m getting truly thrashed. That last part brings up the cost – I’ve been lucky to get a jump start with some borrowed gear but as I start to purchase my own – a smaller wing for the windier days, a more advanced foil, etc. – the equipment is quickly stacking up.

Luckily, as the sport gains in popularity, a robust second-hand market is developing, and new technologies are bringing the cost of entry lower and lower – you can often find decent-condition wings on Craigslist for as low as $350. And for the most part, that’s all you need to get started. As a part of my learning process, I outfitted an old paddle board with the SUP winder (a relatively new device that attaches to the bottom of any paddleboard like the keel of a sailboat) to practice using the wing before transitioning to the foilboard. I’ve kept it around to give friends a taste and so far, everyone who’s tried has had a blast figuring out how to harness the wind in such a user-friendly manner. Best of all, I didn’t feel the need to spring for expensive lessons. Slingshot’s Foil Academy, a free online course, gave me just enough of that classroom knowledge to get out there and figure out the rest myself.

One of the biggest surprises in coming from surfing where noobs are almost universally disliked was how friendly the wind scene is. Instead of snarls and the cold shoulder, I was getting the “welcome to the family” treatment, and quite a bit more advice than I was expecting. As the wind dies in the evening everyone lingers, cleaning gear, cracking open cold ones, and discussing the day’s adventures. At least in my windy little corner of the world, there’s always someone to ask for advice if you need it, or borrow a pump if you forgot yours.

In case you couldn’t tell, I’m in. If there are waves I’ll still be surfing, and I’ve got no reason to go anywhere near a lineup with my underwater guillotine. But this new pursuit isn’t going anywhere. And it’s one helluva down-day activity.