This Is Why the After-Surf Beer Is The Best Beer 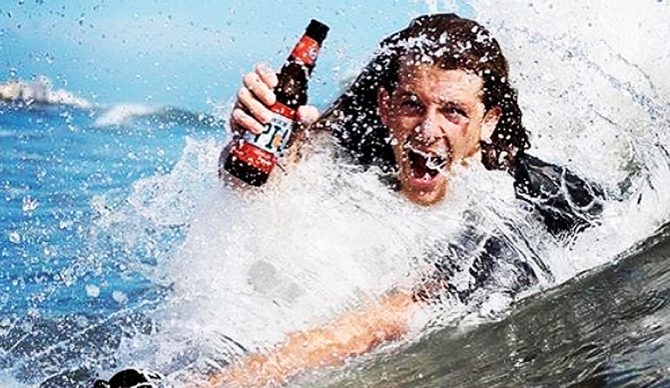 If “Big Beer’s” commercialized version of surfing is to be believed, then surfers follow a strict post-session routine: walk up smiling and laughing over a sand dune at sunset, high five two to three other super attractive Orange County types, build a fire, and then flirt with multiple members of the opposite sex while drinking beer. The lager consumed in the ad changes, but the montage is the same and the soundtrack is always something reggae-tinged or featuring a ukulele.

It’s all bullshit, of course. Every sunset session I’ve had this summer ends with me and a bunch of nondescript dudes whose look could be best described as “John from accounting” trudging off the beach together, scowling. Surfers always scowl, even when we’re happy. “Scowling Surf Face” is our own Resting Bitch Face.

That could be because there are no model-types awaiting us onshore. No pre-made fire. No high fives to be exchanged. There might be a guy on the boardwalk with a guitar, playing an awful Sublime cover, but there are no accomplished ukulele-wielding minstrels.

But there is beer. Because the After-Surf Beer (henceforth known as the After-Surfveza) is the best beer. It is the beer-drinking experience against which all others are measured. And it’s the only part the ad-makers get right.

With science on its side, The After-Surfveza triples down on relaxation – physical activity improves your mood by releasing endorphins into your body, the ocean has therapeutic effects that help ease anxiety, and ale encourages you to unwind. With the body already in a tranquil state from being out in the water and exerting itself, introducing a depressant-laced liquid into your system allows the mind to further rest at ease. I assume this is what aligning your Chakras is like, but with barley, hops, and slurred speech.

What makes the post-session cerveza so ideal is that it combines these scientific properties with a sense of accomplishment. Wrestling with nature and surviving is a cause for a mini celebration. You can momentarily claim victory over the sea and wash it all down with some cool, crisp, well-deserved refreshment. And if you happened to get smacked around in the water and trudge up the sand sporting a massive welt on your forehead, that also warrants a therapeutic beer or two. You win either way!

During the hotter months, the cool beer, warm air, and relaxed state of being can all meld together into something worthy of injecting into your veins. It’s euphoric to feel calm and accomplished in both body and mind. And while having an After-Surfveza is all well and good, it should not be done excessively or at inappropriate times. You may think cracking a hoppy brew at nine in the morning makes you a revolutionary thinker who doesn’t need the hands of the clock to define when they can and cannot relax, but it does not. It just makes you an alcoholic. Plus, drinking that early puts you out of commission for the early-evening glass off. Enjoy the After-Surfveza in moderation.

Lager commercials get the vibe of the After-Surfveza correct. There might not be an entire party that manifests itself out of nowhere on land, but there is one in my mind. Standing outside, watching the setting sun, and drinking a cold beer while reflecting on the session that just wrapped makes me feel like the world is all mine and I can accomplish anything. But that’s probably just the beer talking.