This Is YEWAnon: A Surfing Conspiracy That Explains Why You Can’t Stay on Your Feet 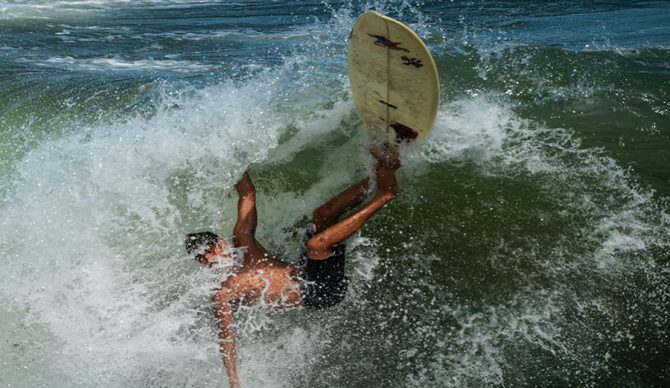 YEWAnon might explain why you still suck after all these years. Photo: Kurt Anderson//Unsplash

It’s the government’s fault you can’t surf well. Your friends may tell you it’s because you ride the wrong board or need to bend your knees more, but that’s only because they don’t know the truth – that a secret cabal of Satan-worshipping politicians live in Orange County and rule the surf world. The WSL, wave pools, CostCo, JOB’s YouTube Channel, PacSun – everything, including your own lack of surfing skill, is under their control.

And this Orange County Cabal doesn’t want to see you succeed, since that would interfere with their master plan of keeping all the best waves for themselves. So, the real reason you can’t surf well is the OCC frequently dispatches radio-controlled seals to various lineups to nudge your board while you’re on a wave, causing you to wipeout in hilarious fashion. Or maybe it’s actually the Navy SEALS. No one knows just how deep this treacherous plot goes.

“Who is this man shouting brazen, totally coherent truths at me on the internet,” you shout at your computer screen.

Taking my name from the enthusiastic phrase often found in comment sections on Instagram below a marginally-worthy surf pic, I am YEW! – an anonymous surf industry insider here to expose the surfing conspiracy theories the government doesn’t want you to know about. Welcome to YEWAnon.

Did you know every board that pops out of China is loaded with spy devices? That’s how the Chinese can track and easily target you. You might purchase an overseas pop out board from a brand whose name rhymes with Björk and think that it will be perfect for learning to surf. Wrong. The Chinese now know your exact location and can take you out at a moment’s notice. One minute, you’re having a nice whitewater session, and the next you’re being chased down by a rogue overhead set wave sent straight from Yantian.

It’s so incredibly obvious, sheeple. I mean, all of FireWire’s boards even sound like they are gadgets straight out of a James Bond movie. “Here’s your FireWire Gamma, Mr. Bond, so you may eavesdrop on the enemy without raising suspicion.” Your local shaper would never mix resin with international espionage.

And those stand-up paddleboards you see sweeping through your local break? They are really prototypes for something much more sinister: a SUP-marine – a submersible SUP that the military has spent years developing in an underwater facility somewhere off the coast of the Channel Islands. Once the SUP-marine is fully functional, it will give middle-aged men the power to drop in on you without being detected. You will think that the open face you have in front of you is all yours, but then recoil in horror as some 55-year-old bucket hat-wearing accountant breaches directly in front of you. The SUP-marine must be stopped at all costs.

Speaking of the military – what is the Marine Corps hiding from us on the shores of Camp Pendleton? A wave better than Pipeline? An exclusive all-nude, Marines only beach club? A second Trestles (also known as Trestles 2: Bloodthirst Boogaloo)? A SUP-marine testing site? The public DEMANDS answers!

Ever notice that professional surfing changed after Kelly Slater arrived on the scene? It’s no coincidence. Everyone claimed that Kelly was different – and that’s because he was: Slater was part of a secret ASP program that began in 1985 (sponsored, somehow, by Gotcha) to mass-produce mutated super surfers in order to win all of the tour contests, therefore keeping all of the contest prize money safely in the pockets of the ASP. 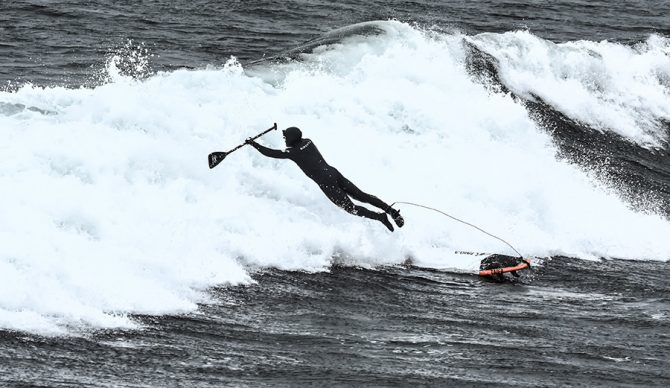 ASP officials used to patrol windblown Florida beach breaks in a windowless VW bus searching for potential test subjects. They would lure surfers into the back of the bus by flashing an expensive-looking camera with a telescopic lens, telling the surfers they got some great shots of them and the photos were developing in the back of the bus. Surfers are endlessly vain creatures, so without question they jumped in the van so the ASP goons could knock them out and transport them to a laboratory in the Bermuda Triangle.

Once in the lab, the subjects were given an elixir that caused their bodies to mutate into super shredders. There is some debate as to what the exact ingredients of this concoction were, but the most popular belief is that it is a mixture of shark blood, one lock of Keanu Reeves’ hair, and flat Corona Light served in a Rasta-patterned pint glass.

Oh, and before The Inertia shuts me down for exposing too much TRUTH: Nazaré waves are all faked and filmed in a bathtub, Joe Turpel has hair plugs, the WSL once floated the idea of selling a Kelly Slater Chia Pet, all waves are flat, and surfing is actually a lot of fun.

YEWAnon is real. The Wavestorm is coming.

Editor’s Note: Jason Nauman is a columnist for The Inertia who frequently writes sarcastically about surfers, their poor lifestyle choices, and other follies of this hopeless pursuit.