Editor’s Note: This feature is supported by our friends at VivoBarefoot, who proudly produce sustainably made footwear.

The first time I ever talked to Torsten Durkan he described himself as a jack-of-all-trades still trying to master something. He was a newly graduated biology student applying for med school and an environmental activist who loves kite surfing, spearfishing, surfing big waves, and of course, the ocean. He had kind of a Most Interesting Man in the Ocean resume, but more importantly a belief that none of this was as important as finding a way to pay it all forward. And that, above everything else, was what made the man most intriguing to me.

He had been looking for a way to make his big-wave exploits more meaningful than risking life and limb for nothing more than an adrenaline rush, all while family and friends worried. “I’m not a professional surfer and don’t have sponsors pushing me to do it for money,” he said. “I was going to be out there in big waves anyway so figured I’d do it for a good cause.”

At the time, that cause was fighting coral bleaching. He had one of those ideas that seemed obvious despite never being done before: He’d dedicate the 2016 El Niño winter to surfing the biggest waves he could find, and for every foot of that wave he’d be raising money to support research on coral bleaching. Boom. The first ever Surfing Be Cause campaign was born. That winter, Durkan caught a 50-foot bomb at Jaws that raised a little over $3,000. He donated it all to Dr. Ruth Gates, a researcher at the Hawaii Institute of Marine Biology who selectively breeds coral and compiles stocks that will be resistant to the conditions of warmer, more acidic ocean waters. 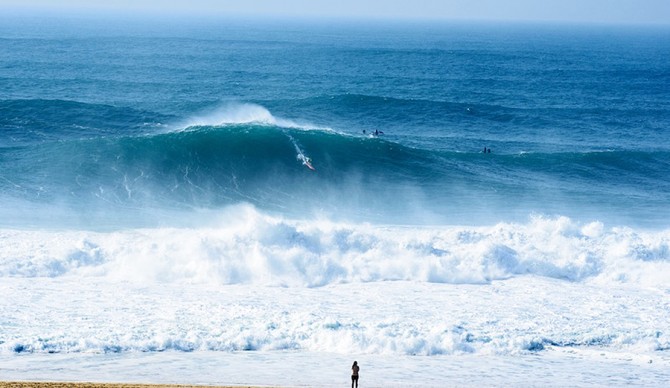 Now a med student in Northern California, Durkan has formed Athletes Be Cause, an organization that allows athletes to advocate for humanitarian and environmental causes through unique fundraisers tied to their sport. Alex Botelho started a Big Waves vs. Big Oil campaign in Portugal and there are new campaigns now to help support Chilean Fishermen and their families and an ocean trash clean up. For Durkan’s latest campaign, he teamed up with the Rob Machado Foundation to raise money for Haiku Elementary, the school Durkan went to in Maui, with a goal of raising $7,000 for water stations and bottles that could help eliminate single-use plastics on campus. And for this winter he’s moved on to work with Breathe California, promoting clean air across the state.

Revisiting the lab where all the money from that initial big wave campaign was donated, you get a sense of how such a simple idea can have a wildly positive impact on the world and why this was the perfect place to start it all. Coconut Island, a very tiny island off of Oahu’s Windward Coast, is actually a converted U.S. Navy base. The idea of “selectively breeding corals” would make you imagine pristine white, high-tech facilities and scientists with top-clearance security badges. Instead, it all feels as much like an abandoned Jurassic Park movie set as anything else. Rows of makeshift tanks are filled with coral polyps where Gates and her team introduce different species to simulated climate change. There are buildings with more labs, larger tanks dedicated to different research projects, and a lot more we don’t cover on our afternoon visit. You get from Point A to Point B in old golf carts, but the entire place is small enough to walk if you’re not in a rush…or just feel like going for a stroll and climbing coconut trees. In short, it’s a humble place with much of it looking like it hasn’t been touched since World War II. Yet people are working here daily to save our oceans with no need for grandeur – just a dedication to a bigger cause – much like Durkan’s work. He’s a man who doesn’t get paid to chase or surf the heaviest waves on the planet, but he’s found a profound way to make it all count for something greater than himself anyway.

Editor’s Note: You can learn more about Athletes Be Cause here, as well as fundraising efforts for Torsten’s newest campaign with Breathe California here.

Vivobarefoot is proud to produce footwear made sustainably using algae and other eco-conscious technologies.

Video shot and edited by Casey Acaster with additional editing by Aika Lau.