I cracked. My body rag-dolled violently underwater, and I began to panic. My feet tumbled over my head. Water shot up my nose. I was disoriented, a little nauseous, and honestly, a little afraid. I needed oxygen. I needed it now. I fought my body away and shot towards the surface – gasping for air.

The solution, in my mind, was above the water: Oxygen. But in reality, that was the easy way out.

The superior solution was internal. In my head. The ability to remain calm in a situation of great discomfort. I wasn’t able to access that skill yet, though. I hadn’t quite developed the discipline required to fully surrender.

I was angry at myself. There was no reason to lose my cool. I was told multiple times to relax. Stay calm. I’ll be fine. I had no reason to doubt it. I was in the hands of Mark Visser, a trained big-wave professional, who, along with Shane Dorian, Brian Keaulana, and the world’s elite watermen, developed The Ocean Warrior Course, a roadmap for developing confidence in the ocean designed for all comers – beginners to big wave surfers. Visser and his team are adamant that the course benefits anyone hoping to develop and maintain a positive relationship with the ocean. It doesn’t hurt that Kai Lenny, Garrett McNamara, and Tyler Wright, to name a few, count as his students.

We were at the very end of an accelerated version of Visser’s advanced course, which typically requires weeks of multi-disciplined training. We condensed those weeks into two hours in a pool in the Sunset Hills area on the North Shore. In this final exercise, which is designed to simulate a violent hold down from a multi-wave set, I experienced a thrashing that felt freakishly similar to a thick lip of ocean to the dome. I felt the violence and disorientation, but a pool is precisely the place to strengthen this muscle. To learn to become comfortable in the ocean more generally.

When we arrived, Visser demonstrated the value of surrendering to hectic situations underwater and being mindful of oxygen consumption through a series of exercises. The advice wasn’t a gratuitous platitude. Far from it. It’s rooted deeply in survival, because anxiety and tension burn through precious oxygen like a flame to gas. When you’re calm, you deactivate your body and your oxygen consumption slows. You’re efficient. You conserve precious air. So it’s imperative to stay calm to survive treacherous ocean conditions. Easier said than done.

I didn’t fully appreciate the utility of Visser’s advice until I had a sampling of the course. I felt the gripping difference between panic and acceptance. It amounted to doubling the amount of time I spent underwater and reducing my heart rate by nearly 50 percent when tackling the exact same tasks. The only difference was a bit of coaching and a mental reframing of the task at hand. I can imagine how the gains would compound when practiced over time.

Granted, this was a single session in a pool, but, if nothing else, it was humbling. It left me inspired to become more comfortable in stressful situations underwater, which is a matter of the mind. One of my wrestling coaches in high school continually chirped the adage, “Mind over matter, baby. If you don’t mind, it don’t matter.” Such is the case in a heavy situation underwater, and it’s rare to access expertise in ocean safety that’s specific to surfing. In that regard, Visser and his students, (Kai Lenny, Garett McNamara, and Tyler Wright) might be on to something.

If you’re interested in learning more about ocean safety and training to become more comfortable in a variety of ocean conditions, you can access The Ocean Warrior Course here. 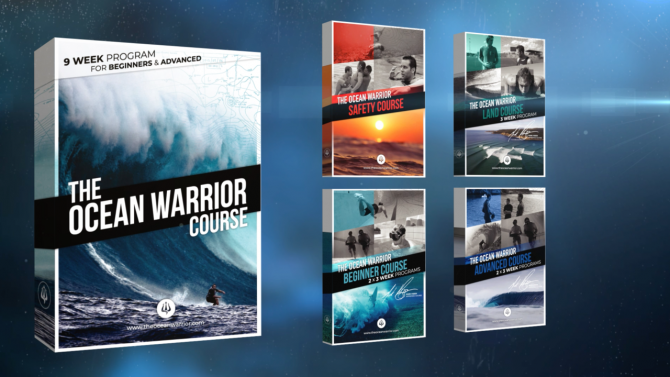 The 9-week program is available here.