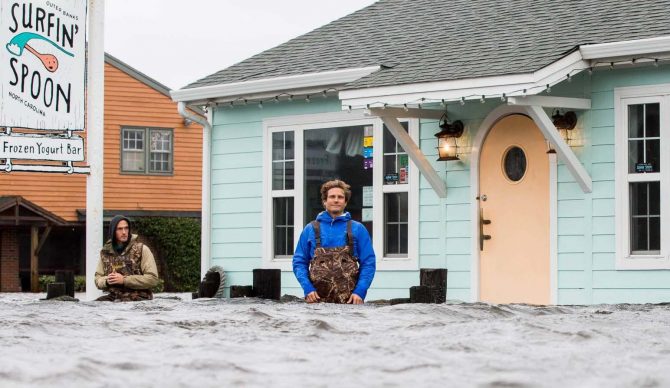 I fell in love with surfing in the Outer Banks. When I wasn’t tossing pizzas or washing dishes or scrounging for tips waiting tables at Lisa’s Pizzeria in Rodanthe (best chicken cutlet in America…add extra Italian dressing), I spent every available moment of summer during my childhood scouring the coast from Kill Devil Hills to Frisco hunting for peaks. Between waiting out seemingly endless stretches of southwest wind and pancake flat ocean, perfecting my s’mores technique at beach bonfires, batten down the hatches when ‘Noreasters and hurricanes smashed our delicate sliver of island, and feeling humbled when houses in our neighborhood literally disappeared into the ocean, time spent in the Outer Banks brought me as close as I can to fully appreciating nature’s schizophrenic beauty and rage.

And Hurricane Matthew delivered an unexpectedly angry torrent of floods to the Outer Banks – bringing with it 91 MPH gusts, $1.5 billion dollars in flood damage, and 26 deaths across the state. Devastation ensued. As it does in this vulnerable slice of coast.

Caught among the wreckage was one of the East Coast’s surfing treasures, Surfin’ Spoon, operated by pro surfer and ambassador of good vibes, Jesse Hines. Hines has landed himself a few covers at the major mags in his day, and he and his wife Whitney ventured on their own to start Surfin’ Spoon a few years ago. The two have built a reputation for slingin’ some of the best fro-yo this side of the Mississip’ for locals and visitors alike. To give you a little more insight into the character of this fam, Hines actually authored two children’s books with names like “Sebi the Surfin’ Spoon: Sebi Gets Barreled.” He loves Golden Retrievers, rocks a mean acoustic guitar, has a kid named Bear and another on the way in January.

And, right now, their fro-yo kingdom is dead.

I dropped by last weekend while visiting friends and family on the East Coast, and the walls are all ripped up from flood damage, and the 5 frozen yogurt machines, 3 freezers, and refrigerator are useless. They were clearing out remaining merchandise to raise funds for repairs, and they started a GoGetFunding initiative to raise funds from anyone willing to chip in. It turns out, when neither you nor your landlord have flood insurance, these things are costly.

Hines is aware that he’s not the only business owner or resident affected by the devastation, so he’s also pledged to donate 10% to folks in the local community who need help.

If you’ve spent any time on the Outer Banks, you’re aware of how special the place is. Hines is an excellent steward of the community, and any generosity you’re able to extend will certainly go to good use. Ice cream headaches await.

You can donate to keep Surfin’ Spoon and the Outer Banks community kickin’ strong right here.