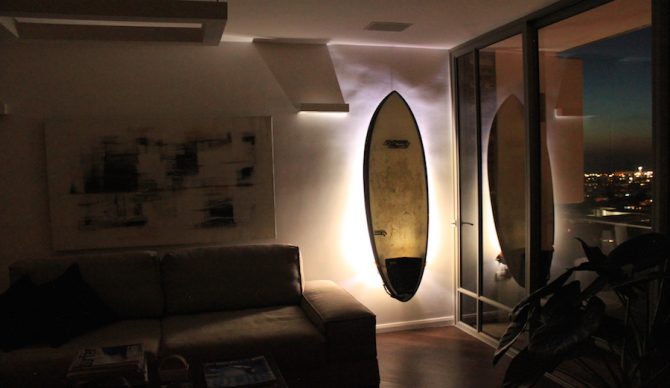 If you’re craving a new surf rack that’s a little more interesting than all the rest, the wait may be over. Air Surf Rack, developed by Nathan Kovari, is a different type of board rack altogether, allowing you to mount your board on the wall in such a way that it looks like it’s floating. An upgrade even allows for an LED backlight glow for nighttime hours. The team behind the Air Surf Rack launched a Kickstarter campaign today, and plan for the racks to hit stores in January.

The Air Surf Rack is a twist on the standard surf rack. It offers the functionality of board storage – taking up minimal space – while displaying your surfboard on the wall like the piece of art it is. This is a crazy unique way to both display the beauty of your surfboard and put it away when you’re not using it. “The rack is not only meant for collectors or [boards with] sentimental value, it’s also meant for daily use,” said Air Surf Rack Owner Nathan Kovari. “It’s a modern way to store your board.” 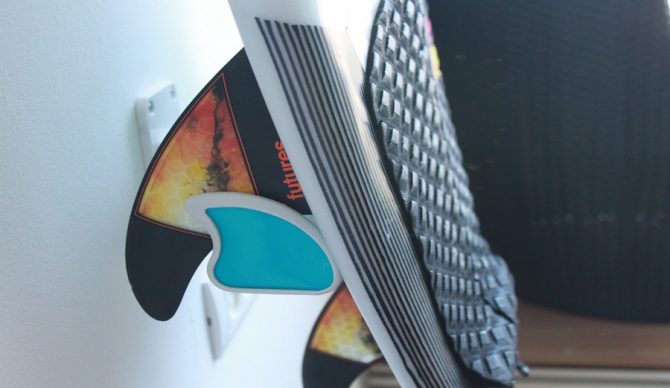 Air Surf Rack developed their product to fit almost any surf board on the market. Photo: Air Surf Rack

Nearly any board with two or more fins can be mounted on the Air Surf Rack. They’re then locked into place by the bottom break, preventing it from tipping over or falling forward. A top component offers added stability by securing your board close to the nose with clear adjustable straps.

Air Surf Racks are unlike the old school horizontal two piece racks and fit against the wall around knee height, locking in behind your board and hidden in plain sight. The result is a floating effect.

“There was no good solution for what I wanted, which was to hang my favorite board vertically,” said Nathan. “I thought it would be cool to not only make a surf rack that showed off the board vertically, but also make one that made the board look like it floated along the wall, focusing all attention to the board itself, not the rack.”

In addition to the standard Air Surf Rack, Nathan and his team also developed the Air Surf Rack Ignited, which boasts all the same features with an additional LED light behind the board, “giving it that halo effect at night.” “At first, the Air Rack was created, but I wanted to see my board at night, so I thought it could be real cool to have a light attached to the rack and behind the board that was also hidden from viewers,” said Nathan.

Supporters on Kickstarter will be able to secure an Air Surf Rack at wholesale price before it hits shelves in January, supposing the campaign is successful which is very likely. The racks have already been tested by shapers and surf companies around the world, with Hurley purchasing a bulk order to display a few boards at their Surf Club in Spain. Retail price ranges from $69.99 to $99.99.