This ‘Travel Journal’ Is 396 Pages of Every Surfer’s Dream 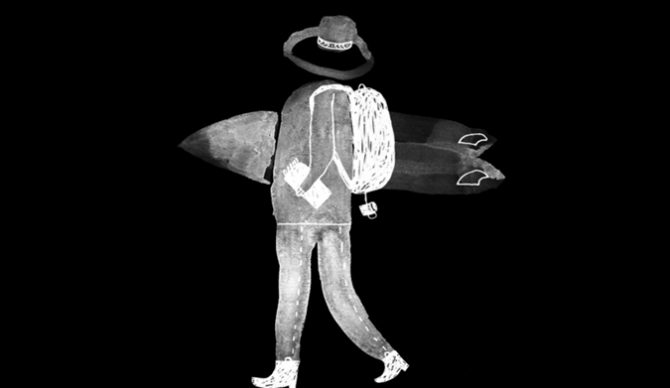 It is rare to find anybody who has been to the forgotten shores of Kiribati, let alone traveled purely in pursuit of surf. As fickle as the plastic-laden atoll may be, there will often be a wave somewhere, breaking far off on an outer tidal reef, or perhaps that one breaker that makes itself known when you hook into the first beer to cap a long and sweaty day. I was hence quite surprised when I stumbled upon Michael Kew’s Crossings. It’s the collection of surf tales Kew gathered in a decade of traveling the globe. Along with extended venturing throughout the surf-riddled globe, Kew saw the potential for surfing on a bunch of far-flung atolls hugging the equator, and for that I applaud him.

Mixed with expeditions far and wide, in search of surf constantly but also ringing true of the desire for isolation and experience, Kew shows that in order to embark on surfing exploration sojourns one doesn’t necessarily have to find waves he’ll talk about when he returns home. There is humility in his writing, mannerisms brought out in his prose that is familiar yet sometimes unimaginable due to their location. Unless you have been there, you will never really know.

There is a dry sense of observational humor that runs alongside respect for the situations he finds himself in. The chapters relating to the Pacific Islands tend to make me smile the most because it reminds me of my own travels through the region. It’s well worth a read, not only because it’s a story of surf and travel, but it gives keen insight into social arenas you may never get to explore otherwise. You can tell that Kew has become a master of vagrancy, a king of working the bar and has risen to chiefdom in the small world of surfing literature alongside Finnegan, Warshaw, and Winton. Get lost in it.

You can purchase a copy of Crossings here