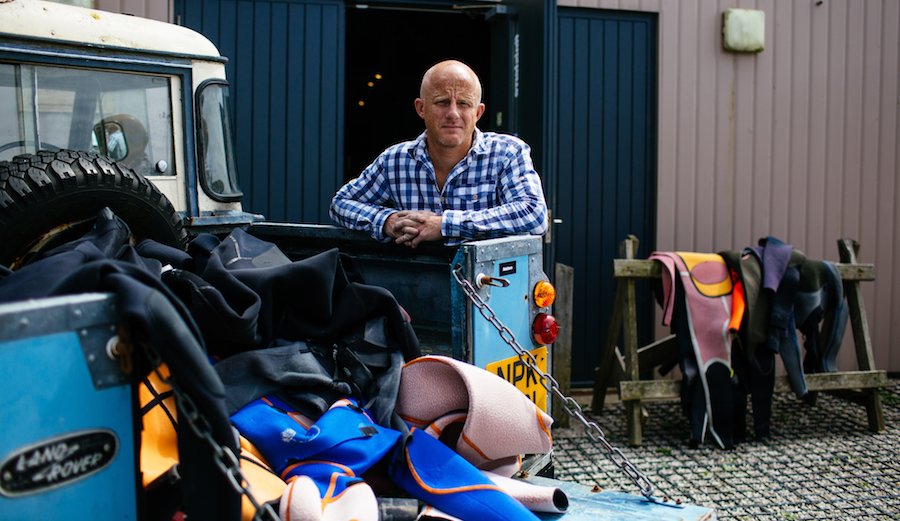 Tom Kay, founder of Finisterre, is working with the University of Exeter to come up with a way to recycle old wetsuits. Photo: Courtesy of Finisterre

Now more than ever before, surfers are more cognizant of the environmental impact they have pursuing the activity they love. And lucky for us, a handful of impassioned folks are doing their part to tackle the industry’s hardest questions, like how do we make surfboards more sustainable, and how do we make wetsuits greener?

Specifically regarding wetsuits, no matter how sustainably built or how green the materials, the question once a suit reaches the end of its life is the same: What the hell do you do with it?

“That’s the elephant in the room,” says Tom Kay, founder of UK-based surf company Finisterre. “Plenty of surfers have garages full of old wetsuits they have no idea what to do with.” In the UK alone, discarded wetsuits account for nearly 380 tons of waste per year. For now, the options are limited to holding onto them, throwing them away, or giving them to a company that downcycles them into straps for handplanes, or yoga mats for example. But of yet, re-cycling wetsuits is impossible, or at least no company has devoted the time, energy, and resources necessary to determine how to do it.

That is until Finisterre brought this dilemma to the University of Exeter and decided to partner on finding a solution.

After a months-long recruitment process last year, Finisterre brought on Jenny Banks as the company’s first full-time wetsuit recycler. Her job is to work with experts at the University of Exeter’s Centre for Alternative Materials and Remanufacturing (CALMARE) in what Kay identifies as a two-year two-part initiative. The first is developing a recyclable wetsuit – that is, determining the optimum materials and construction for a functional wetsuit that at the end of its life could be broken down to a raw material and used to make a new wetsuit. Finisterre hopes to have the early prototypes of a recyclable suit done this winter. The second challenge is determining the recycling process – e.g. once a recyclable suit is returned, making it into a recycled wetsuit. That distinction is key.

When all’s said and done, Kay hopes that the initiative will result in a closed loop production cycle for wetsuits, which would be an absolute game changer.

“Our ideal outcome if we determine how to make new wetsuits from old wetsuits is we then share that information with the rest of the industry,” Kay told me.

For Kay and Finisterre (which recently became a certified B Corp), the mission isn’t to hold sustainability hostage and make surfers hoping to make smarter choices beholden to their suits. The hope is that the outcome transcends a single brand and helps to clean up an entire industry.