Every surf trip is fueled by the simple allure of finding good waves and the itch to escape one’s status quo. Photographer Nick Eaton did just that this past winter, taking a month-long trip to Puerto Rico to escape the winter blues, surf as much as possible, and shoot every opportunity he could get.

Naturally, when you’re a guy with a camera on a surf trip, you’re going to make friends. So Eaton found himself meeting new people and getting invited to new spots along Puerto Rica’s west coast, filming a gaggle of talented local rippers and finding his camera pointed at some recognizable faces like Craig Anderson, Ben Gravy, and Dane Reynolds. So when Eaton got home from his trip, he did what any surf photographer would do with a freshly-packed hard drive and got to work on an edit, Snowbird.

To the casual observer, trip highlight reels are just that: highlights of the best surf. But Eaton’s story also reminds us there’s so much more going on behind the camera of every edit, every social media clip, and every surfer who gets the glory.

“In this video, there are only two clips from my paddle out at Tres Palmas,” Eaton told the Inertia, teasing that there’s a bigger story.

Eaton details paddling for 20 minutes through a channel on a soft top so he could safely get his camera housing out to the lineup.

“It wasn’t the biggest that day but once we got out there I could have sat for hours just watching and shooting,” he says. “I sat in the channel, safe from any waves coming my way for about an hour. Then a massive set swung wide and headed my way, I paddled as fast as I could away from the wave but could tell I wasn’t going to make it.”

Eaton grabbed his housing, ditched the soft top, and dove as deep as he could, tumbling in the whitewash and taking his beating. When he resurfaced, the board was snapped in two. He threw his housing on top of what was left of that soft top, still attached to his ankle, and started paddling. The end result: Nick Eaton took a beating and lost a board before he could ever get “the shot.” But he held onto his camera.

“Would I do it again? In a heartbeat,” he says. “Did I get amazing shots out there? I wouldn’t say so, but that’s what happens when shooting from the water. Sometimes you come back with nothing but a beating.” 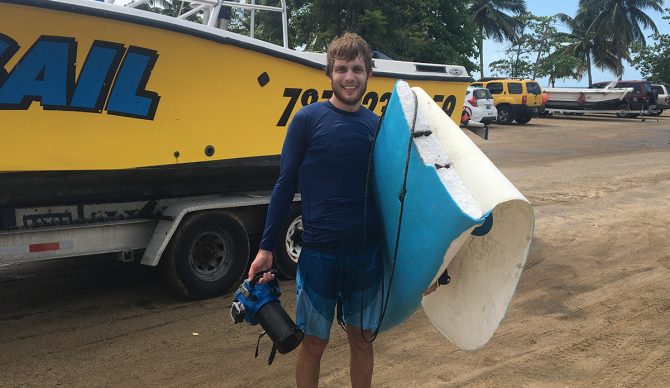 The board didn’t survive. But the camera did.