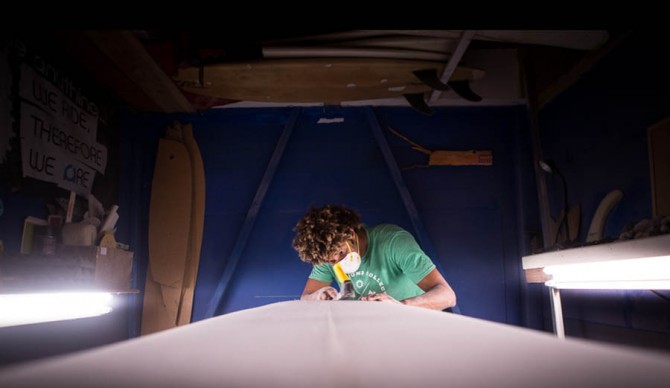 Bryan Knowles of Ride Anything gets after it in the shaping bay. Photo: Smolowe

Come on! “Support your local shaper” was never a real movement in the first place. At least not in terms of a pure, homegrown movement that has ever been embraced by any sort of sustainable population of the paying, non bro-dealing, surfboarding public.

“Support your local shaper” is a trendy tagline, uttered forth by name brands throughout the industry and chanted back by their flock. It has sold a hell of a lot more mass produced, high margin boardshorts for the mainstream surf apparel industry than it has custom boards for local little guys. Don’t get me wrong, I dig the concept whole heartedly, but let’s just be honest with ourselves about the origins and reality. The reality is that “Support your local shaper” is more often an abbreviation for “Support your local shaper so long as it costs way less than buying a board off the rack at Jack’s.” And that’s fine. People shouldn’t feel bad about wanting to get the best deal they can on the wave shredding devices of their choosing.

But more often than not, it’s “the deal” that determines one’s propensity for local shaper support, so the abbreviated version of this tagline seems a bit… misleading. See for most “Support your local [whatever]” campaigns, where whatever equals stuff like, farmer, baker, book store, fish market, bicycle shop, jeweler… literally whatever, the presumptive identity statement you are making is “I am a responsible consumer, therefore I am willing to fork over more of my hard earned cash for this locally produced whatever.” But when “whatever” is a surfboard, well the latter half of that responsible consumer statement gets a little funky.

Sure there are some honest to goodness loyal customers out there who dial in their quivers on the dusty doorsteps of their local shaper shacks, not wanting for anything more than to do good by their friendly local artisan. To those few, I and the foam mowers before me salute you. However, the reality for most small scale shapers is that being on the business end of that customer relationship isn’t always as romantic as the bumper stickers and ad campaigns might suggest. But that’s shaping. It’s raw, dusty, achy, and less profitable than most other professions that incorporate that level of craftsmanship. Yet for those of us who have ever witnessed something they poured their heart and soul into, performing under the stoked feet of a happy customer, it’s hard to imagine trading in the planer for anything else. It’s those moments as a local shaper that make all the rush order, bro-deal, “is my board done yet?” custom change orders totally kinda worth it.