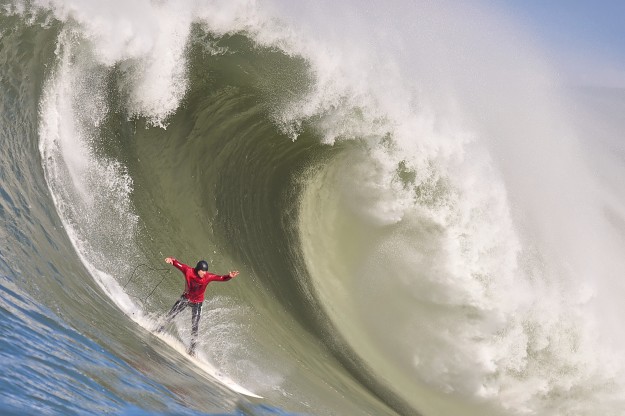 Mavericks…somehow things continue to get more real there. Photo: Jacobovs

No matter how good the conditions get at Mavericks this winter, there will very likely be no contest. Trouble has been looming for the Titans of Mavericks organizers like a giant, angry set out the back. And this week, it finally landed: the two LLCs behind the famed big wave comp filed Chapter 11 bankruptcy in Los Angeles, all but certainly killing this season’s contest.

Making matters worse, both companies are being sued by Red Bull Media House North America for breach of contract and unjust enrichment, according to the lawsuit, filed last Friday. The bankruptcies and lawsuit leave many unanswered questions about the future of the contest and the exclusive five-season event permit still in the hands of the organizers.

Cartel Management, the company belonging to Griffin Guess, owes somewhere between $1 and $10 million, and Titans of Mavericks owes up to $500,000, according to the court filings obtained by The Inertia. Together, the companies owe money to scores of parties including Fox Sports Network, and have unpaid bills to the San Mateo County Harbor District for $6,600, credit card debt to the tune of $20,000, and even owe surfer Savannah Shaughnessy $300.

But by far the biggest debt — $700,000 — is owed to a Texas-based sunless tanning company. That debt arose from a lawsuit that Cartel Management lost late last year in L.A., where a jury decided that Cartel had failed to make good on its obligations to promote the products. The full judgment was for $1 million, of which $300,000 is owed by Griffin’s wife, supermodel Marissa Miller, who, as the jury found, fell short of performing her contractual duties. If Red Bull prevails in its lawsuit, the two companies could be on the hook for at least another $400,000.

On Wednesday, the people behind the two ailing LLCs released a statement saying that the bankruptcy filings “represent the culmination of a strategy designed to implement a sale of the assets and intellectual property of the companies to afford a buyer certain protections available only in bankruptcy. Titans of Mavericks intends for such a sale to ensure a smooth and swift transition of the business and operations.”

Guess told reporters that “It is time for a larger organization to gain from all of our hard work,” adding that since 2014, Cartel sunk $3 million into “developing the brand” and running the contest.

But it might not be that simple: Cartel’s event permit could be viewed as an asset. If so, it’s not certain that Cartel will be able to pawn it off to the highest bidder. It’s possible that the companies Cartel owes money could scrap for its assets, including the permit. And who would have the greatest claim? Possibly, Segler Holdings, the sunless tanning company that a jury said lost out on $700,000. Will they be the next company to run a contest at Mavericks?

“These are all questions I’ve been asking and haven’t been able to get a straight answer to,” says Sabrina Brennan, a San Mateo County Harbor District commissioner.

In interviews with The Inertia, attorneys for the tanning company made clear they viewed the permit as an asset and might go after it if they did not receive their payment from the judgment.

“I’m hopeful some other entity will surface and want to run this event in a very professional way and will provide a higher level of financial transparency,” Brennan says. “I want to know the prize purse is funded and that they’ll be supportive of including women athletes and run it like a world class event.”

The Red Bull lawsuit stems from the live streaming rights. Since 2014, the energy drink company has had an ongoing deal with the contest that it will pay $400,000 for streaming rights each year. But if the contest doesn’t run, the organizers are required to return that year’s money to Red Bull.

According to the lawsuit, Red Bull forked over the money for this year’s contest in early January and partook of weekly production calls regarding the event. Then, apparently without notice or explanation, the contest organizers informed Red Bull that they no longer had the streaming rights, and held onto the money.

Cartel told Red Bull of this by way of a legal letter attached to the lawsuit. When Red Bull received that letter, it sent a reply, also attached in the suit, telling Cartel that its note “left the team at RBMH surprised and dismayed, because they have been working diligently with their counterparts at Cartel to make this year’s Titans of Mavericks event a success.”

Red Bull is suing not only to get their $400,000 back, but they’re seeking punitive damages and attorneys fees, so the total could be much more.

In a press release, the Committee for Equity in Women’s Surfing, an organization that’s been outspoken about the inclusion of women in the contest said this: “We suspected there were problems when there were perfect conditions in January but no contest was called. The surfers and fans are the ones who are suffering the most. What a letdown.”