Back in the 1980s and ’90s, Japan was a center of surf culture. The island chain held multiple CT events, and the Japanese department store, Marui, sponsored the Pipe Masters. The waves for the contests were usually small and weak, but the food, culture, hospitality, and promise of a wild night in Tokyo at the end of the event always made Japan a favorite stop for the pros on tour in those rock n’ roll days.

It’s been thirteen years since the last big event there, the Quiksilver Pro Japan. The Japanese surf industry is now a shadow of what it used to be and a native-born Japanese surfer has yet to qualify for the tour. But hope, in the monolithic form of the Olympic Games, is on the horizon. Tokyo will host the Olympics in less than two years, and surfing will make its first-ever appearance. Such a momentous occasion could revitalize the surfing industry not just in Japan, but also across the world.

Well, it could if there is surf. Pumping, barreling waves like the ones Andy Irons and Kelly Slater competed against each other in Japan in 2005 might draw some global attention to surfing, but if it’s two feet and onshore, like it is for most Japanese WQS events, it will be tough for the groveling to compete with the 32 other Olympic sports being contested in Tokyo. But could a lack of consistent surf be solved with a new wave park facility? Of course. But the main question is, will it be done on time? Here’s what I found.

Shida Shita beach appears quickly on the horizon once you leave the rice fields and reach the Chiba coastline on the way from Tokyo. It takes about 90 minutes to get there depending on the traffic. The small town of Ichinomiya next to the beach is a mini surf city, a Japanese version of Hossegor, Huntington Beach, or Jeffreys Bay. The Olympic committees have big plans to create a beach festival at Shida Shita, and the main parking lot is already under construction.

A series of tetrapod jetties break up the shoreline. They’ve created some fairly reliable sandbars that are angled in a few different directions, which helps them work on different swells and winds. On the day I was there, the waves were flat, but from what I gather it’s one of Japan’s most consistent spots. Hopes are high that overhead waves from a typhoon will arrive at some point during the Olympic waiting period.

The trouble is that even if there is surf, it’s not likely to be anything to write home about. I scoured the internet for Shida Shita footage. and, when it’s bigger, as it was for a couple days during the Ichinomiya Chiba Open in May, it does barrel. But my overall impression? Typical, average beach break.

Having surfing in the Olympics was Duke Kahanamoku’s dream over a hundred years ago. If he came back to life in 2020 and viewed the spectacle of surfers from around the world coming together at Shida Shita with flags and all, he’d definitely be proud. But would he be stoked on the surf?

Japan’s best waves are reef breaks and river mouths. On their day they can get as good as anywhere in the world, but they’re mostly remote, localized, and fickle. None of them are under consideration as backup spots for the Olympics.

In June, the Kelly Slater Wave Company announced that it was building a new Surf Ranch outside of Tokyo. Few details (including a finish date) were provided, but speculation immediately ran rampant that the Olympics could be moved there if the forecast wasn’t looking good for the Olympics. The WSL, which owns KS Wave Co., was also bullish on the potential of the Olympics happening in a Slater pool.

“We are trying to get a wave facility built in Tokyo in time,” WSL CEO Sophie Goldschmidt told Sports Business Daily. “Hopefully, if we can get it built, there’s a good chance that the Olympics would take place in one of our facilities. I think if we’re able to do that, it’s likely to be the lasting impression of the Tokyo 2020 Olympics.”

The official word however from the governing body of Olympic Surfing, the ISA, is that that they aren’t holding their breath. According to ISA President and the leader of the effort to get surfing in the Olympics, Fernando Aguerre, the games are happening in the ocean no matter what.

“With the support of the ISA, the IOC and the Tokyo 2020 organizers have determined that surfing will take place in the ocean in Tokyo, at Tsurigasaki Beach in Chiba,” said Aguerre in a press release.  “In addition, the ISA is excited about showcasing surf culture and lifestyle through an innovative beach festival concept at the Games.”

At the end of the long Tokyo Bay Aqua-Line Bridge lies the industrial town of Kisarazu. Property here is cheaper than other parts of Japan because it sits on reclaimed land. The site of the Kelly Slater Wave Ranch in Tokyo lies near a small highway interchange. You can see a small gate but not much else behind it.

My future father-in-law led us to this spot, and my fiancé found an image of the gate on a Japanese surfing blog that confirmed we were in the correct location. They didn’t want me to walk around the gate and trespass on the property, but I assured them, “It’s okay. I know the owner.”

The place looks like it’s at least ten times bigger than the current pool at Lemoore. There’s been grading done about a thousand yards in every direction, but other than that, it’s an empty field. Can a fully functioning Surf Ranch be built here in less than two years? I have no idea.

Even if surfing in the Olympics goes down in the ocean, will wave pools be a part of future games? The next two will be held in Paris and Los Angeles, both cities have viable ocean waves fairly close by, but in summer? Maybe a wave pool would be an option for them as well? And what happens when the games come to a fully landlocked city like Moscow or Beijing? Is it wave pool or bust then?

For Japanese surfers, the Olympics will come and go no matter where they are held. The season for swell there is short, most spots are crowded, and it’s not the easiest place to go surfing. I went to a small, weak, standing-wave park in the middle of Tokyo, and the place was booked solid. Having a world class wave pool on demand just across the bridge is likely to have a seismic impact on the surf culture and industry there.

The line from classic the Kevin Costner film, Field of Dreams goes like this, “If you build it, they will come.”

And they will. But whether it’s ready for the Olympics or not, well…that’s the million dollar question. Right now, it’s just an empty field. 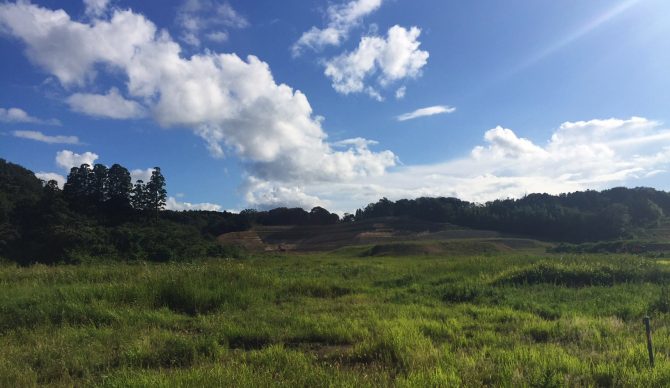 Is this where we’ll be watching surfing at the 2020 Olympics? Lots of work is left to be done. Photo: Jamie Tierney