Tom Morey, Iconic Surfing Mind and Inventor of the Boogie Board, Has Passed Away 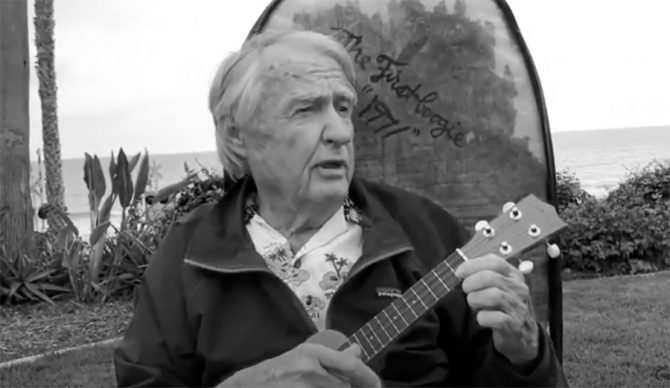 Tom Morey, in front of the first Boogie Board, 2017. Photo: Screenshot//eBodyboarding.com

Tom Morey wasn’t born near the ocean – it was actually Detroit – but during his life he would arguably have more influence over ocean sport than any other person alive after his parents moved him to Laguna Beach as a child. Morey, the inventor of the Boogie Board, died this week at 86 in Laguna Woods, Calif. near his longtime home of San Clemente. But his influence will live on for decades.

Morey first thought of the Boogie Board (which he named after his love of Jazz) while living in Hawaii in the early seventies. There was a big wave near where he lived he wanted to ride but didn’t think he could get into it standing up due to wind, which was common. So the mathematics major who worked for Douglas Aircrafts before coming back to the surf industry, cut a piece of foam in half, put swim fins on and paddled out. It worked like a charm.

“The first thing that happens, I feel the ocean,” Morey said in an old interview. “You don’t get to feel the contour of the ocean until you get on a Boogie Board.”

He sold his first one in Hawaii for ten bucks before moving back to Southern California to start production on the newest wave-riding tool, one that would eventually get thousands of people out in the surf – even people who would never stand up on a board and would actually dedicate themselves completely to riding surf while lying prone.

The Boogie Board was far from the only invention Morey’s inquisitive mind devised. He also thought of a sticky substance that could be sprayed on instead of wax (that never really took off), and developed the first foam surfboards with Mike Doyle. But one of his most important contributions to board surfing was the removable fin system.

Morey, according to The Inertia’s Sam George, introduced his W.A.V.E. System (Water Apparatus Vehicular Engineering) in 1967. Morey’s double-screw-down W.A.V.E. box accommodated a broad variety of fins, including George Greenough’s game-changing, high aspect “speed skeg,” and the system was soon in use by most major manufacturers.

Morey will be remembered as someone who greatly influenced the technical side of surfing. But above all, he just loved riding waves and wanted other people to truly love it as well. “For anybody to become a graduate of this planet,” he once said, “it is essential that they learn to enjoy this activity.”