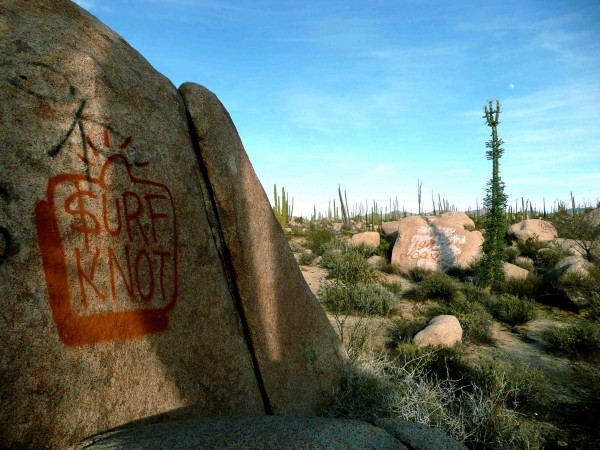 The graffitti in question.

A couple of months ago I informed readers of The Inertia that if they felt something was being under-reported in the surf media they should email me and I would look into the story and report on it as best as I could. Not long after, a couple of people emailed to say that I needed to investigate a certain kerfuffle that took place last year in San Juanico, Mexico when a couple of Industry-sponsored surf artists spray-painted graffiti on some rocks near the surf break Scorpion Bay.

My initial reaction was “I have bigger fish to fry.” This was partially based on the fact that journalists are unfailingly self-righteous, regardless of how trivial their subject matter. But I also felt, as I’m sure others do, that some young guys spray painting rocks in a far flung Mexican pueblo is not newsworthy and essentially unimportant. If surfers can’t take part in a bit of good-natured civil disobedience and hooliganism then we have certainly lost a bit of our long and honored tradition of mischief-making.

But I went ahead and shot out some emails and the story that emerged was newsworthy, though not in a sensational, or “gotcha journalism” type of way. Instead it’s a case study of the uneasy relationship between the dream of surf travel in far flung destinations and the reality of people living in hard scrabble areas trying to make a living.

San Juanico is a small fishing village in Baja. It is small enough that it doesn’t have a Wikipedia page and English web searches yield mostly surfing-related results. Until surfers started coming in the seventies, the main industry was fishing and many locals continue to make a living casting nets and diving for lobster and abalone. San Juanico also happens to be the home of 6 spectacular right hand point breaks which have been a major draw to many surfers over the years. When I got in touch with local fisherman and surfer, Pedro Rodrigo Aguillar Villa, 32, he said that foreign surfers had been coming to San Juanico for as long as he could remember. “I know a lot of foreigners and have been friends with some for over 15 years,” he said. “The majority of foreign surfers are very friendly and respectful towards the locals, and the town tries to offer a warm welcome to foreigners because they are a source of employment for many people. The problem is that sometimes a minority of visitors show up and want to dominate the lineup…sometimes they also cause other types of problems.”

An example of the latter occurred when, on a 2010 film trip for Mikey DeTemple’s film, High Seas, a group of surfers decided to engage in a bit of graffitiyng. As they painted, photographer Kyle Lightner snapped some shots of surfer/artist Brandon Lomax painting various logos (of all things) onto rocks that line the cliffs of San Juanico. The photos hit then hit Internet and popped on various blogs.

Exactly who, if anyone did the painting besides Lomax remains unclear. Billabong-sponsored surf artist, Tyler Warren’s name has been most associated with the incident (perhaps due to it’s relative recognizability) but he maintains his innocence. “I was with a group and one of the kids painted the rocks. I did not know what he was doing and I would not have approved. He chipped off the painting with a rock after being told he should not have done that.”

Despite the apparent evidence on the net, there is actually nothing to corroborate the accusation that Warren graffitied anything in San Juanico, however, he admits culpability in an earlier graffiti incident in Valle de los Cirios. “It was two years ago and I regret doing it,” he says. I was just not thinking straight at the time and I didn’t think anyone would care. I am super bummed on all this stuff…next time I go to the area I’m planning on removing it.”

In apparent retribution, some locals publicized the incident in San Juanico as best they could, by creating a blog that explicitly linked Warren (erroneously) Lomax, and Lightner, to the graffiti and posting photos of the graffiti on the message boards. They also contacted American Billabong representative Enich Harris. In an email chain forwarded to me, Harris writes that such graffiti does not represent the views or stance of Billabong and also pledges to speak with Warren about the matter and come up with a plan to “address the situation” and “to give back down there.” It appears that no such arrangements were made, though Harris did not respond to repeated email requests to comment, so it’s possible that they are still in the works. Lomax also did not respond to repeated interview requests and Lightner declined to comment.

“The graffiti gives our town a look that we don’t want it to have,” says Aguilar Villa We are afraid that things like this will make visitors see our town in a certain way, like they will think that we vandalized the town ourselves and won’t want to come back.”