True Crime: My Leash Is a Serial Killer 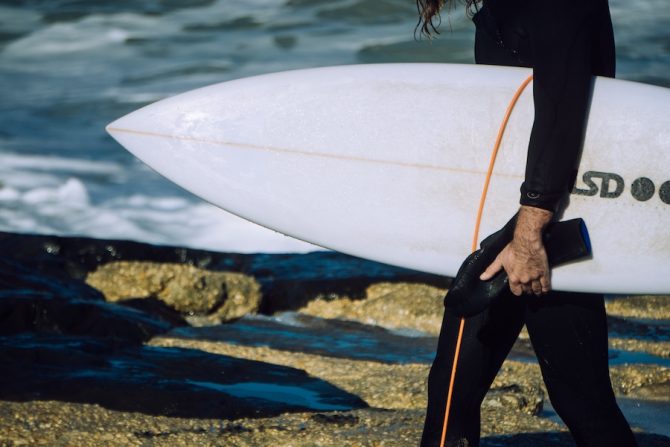 Leashes are, at times, a necessary evil. Photo: Harrison Kugler

The ocean was digesting me, churning my body around while holding me underwater. It wasn’t supposed to be this way. My plan for soaring across the face of this head-high wave had been foiled by my leash. When I went to pop up, my foot tripped over the six-foot cord, sending me tumbling into the set wave’s belly. A delicious kook feast.

It was one of those “which way is up?” moments, where every direction you swim feels like the wrong one. Failing to find the surface, I reached out to find my leash, hoping that it would lead to my board and daylight. I was surprised to find the rope not attached to just one ankle, but wrapped around both. I leaned forward and tried to untangle myself. But nature, always the asshole, made sure another set crashed down on my head, pushing me deeper into the abyss. The wave’s energy pulled my board away from me, in turn tightening the bind around my ankles. I struggled to swim. Oxygen was becoming a rare commodity. Where the hell was the surface? I was furious. This leash, this thing that is supposed to aid me in not losing my board, had not only thwarted my ride but sent me to swim with the fishes like a scorned Chicago mob boss. This equipment wasn’t trying to help me. My leash was trying to kill me.

Leashes have always been considered a necessary evil, at least. While they keep that fiberglass flotation device attached to you in big, dangerous surf, they’ve also claimed the lives of many surfers over time. These tragic stories follow largely the same pattern: surfer wipes out, leash becomes tangled or stuck to rocks or other obstructions, surfer drowns. And while the industry has made advancements to make leashes safer by adding a pull tab to the cuff – the equivalent of an ejection button – leg ropes have retained their malicious tangling tendencies, still finding ways to inject danger into a routine go out.

To me, the standard surf leash is basically Home Alone’s Kevin McCallister wrapped in polyurethane and strapped to your ankle. It likes to assault you with slapstick gags that hurl you off a perfect wave and into an epic wipeout – wrapping itself around your ankle to trip you, wedging itself painfully between your toes, and positioning itself beneath your feet so it feels like stomping on Christmas ornaments. These are the kinds of antics that send Joe Pesci and surfers alike into an unintelligible rage.

The leash operates under the guise of a charming, helpful device, but this could not be further from the truth. Once underwater, the leggie pounces, ensnaring your limbs or affixing itself to a rock in an attempt to seal your fate. These are the tendencies of a psychopathic serial killer, torturing and humiliating their captured prey before offing them for sadistic jollies. I fasten a rope to my ankle so my board avoids careening into rocks or another surfer’s head, not to be treated like an Imperial AT-AT.

The media demands that all serial killers must have a nickname. Dennis “The Orange County Ogre” sounds way sexier and sells more papers than Dennis the serial killer. That’s why I am dubbing the leash The Ankle Anaconda, a tribute to its snake-like hunting tendencies. I eagerly await the upcoming Netflix special titled, Murder Un-Leashed: The Story of Ankle Anaconda.

While I evaded the anaconda’s clutches that day, they remain an at-large threat to the surfing community. In a world where duct tape, space travel, and ShamWows exist, the formula for preventing a leash from turning into a lasso remains elusive. It is the surfing industry’s greatest unsolved mystery. Sure, some small leads have developed, but Annie continues to wreak havoc on surf sessions across the globe. Where is Carmen Sandiego when you need her?

Does this mean I am going to start surfing sans leash? Of course not. I would rather die than be an asshole.