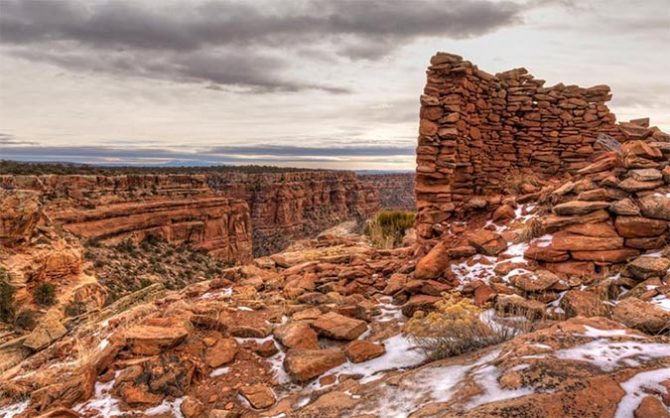 Wow, this guy is having a week: retweeting anti-muslim banter, using a racial slur while hosting World War II Navajo code readers at the White House who graciously served our country and celebrating the firing of a national news anchor over sexual harassment allegations while facing at least a dozen of his own. And that’s just this week.

Then there’s this piece of deplorable environmental news: according to recent leaked documents, Trump will announce the shrinking of Bears Ears National Monument by 85 percent and reduce Grand Staircase-Escalante National Monument by at least 50 percent. Sources did add that things could change before Monday–when he’s expected to make the announcement in Utah–but this apparently is the plan as of now (there is also the very real chance that this move could be blocked by the courts). According to the documents, the monuments would be downsized to look like this: Bears Ears would be reduced from 1.35 million acres to 201,397 acres and Grand Staircase-Escalante from nearly 1.9 million acres to 997,490.

Interior Secretary Ryan Zinke recommended the changes to the President (ironically, he’s proposing a new monument in his home state of Montana where many think he hopes to become governor one day. Protecting public land is paramount to Montanan’s, analysts say). Trump is reducing these areas “to allow for activities such as logging in forests where that is now off limits,” and other resource extraction.

“Americans have overwhelmingly spoken out against the Trump Administration’s unprecedented attempt to shut down our national monuments,” said Rose Marcario, Patagonia’s president and CEO. Aside from pouring resources into the monument’s creation over the past several years, the company has threatened litigation against the President to protect it, as have multiple Native American tribes. “If this leaked document is true, the Administration’s unlawful actions betray our shared responsibility to protect iconic places for future generations. We’ve fought to protect these places since we were founded and now we’ll continue that fight in the courts.”

A request for comment from the Native American Rights Fund was not immediately returned.

As you can see, from the above, and hopefully regardless of your political affiliation, this president has clearly gone off the rails. Aside from his political and social blunders, this reduction of national monument land seems ill-timed and without a real means to an end: natural resource extraction companies don’t even appear on a list from 2015 of Utah’s top 50 employers. All the while Utah has lost the Outdoor Retailer Trade Show, a billion dollar boon to Salt Lake City, over the state’s policies while the outdoor industry continues to be a huge mover and shaker in the economy of creating jobs.

This would be the single largest elimination of protected lands in U.S. history. Democrats can certainly get behind a reasonable Republican president and the opposite is true as well, at least in the America I love. But this presidency has taken on a life of its own. And that’s certainly not a good thing.