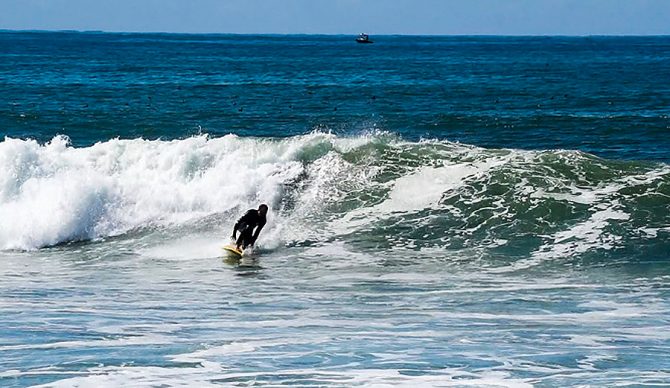 I once heard Kelly Slater say, “If you’re an intermediate level surfer you should surf a big wide board and surf comfortable waves.” The idea, I presume, is to build fundamental skills and confidence by surfing waves repeatedly and surf them well.

A common problem with intermediate surfers is that we all think we are better than we are. We think we are too good for bigger boards and softer waves. We all have those friends who think they’re too good for anything but what the CT pros are riding. But until said friend is repeatedly ripping smooth, flawless cutbacks and tucking into closeout barrels with ease, they aren’t too good for any wave or indeed any board.

Personally, I enjoy riding all types of boards and regularly browse websites looking at the latest and greatest designs. One of the most common descriptions I read in these board reviews and breakdowns is the classic cliché, “Paddles like a longboard, turns like a shortboard.” Great, that’s the board I have been searching for my whole life. I’m the lifelong intermediate surfer in my mid-thirties, so any help I can get with paddling and catching waves is well appreciated. Turning on a dime is a great cherry on top.

Unfortunately, through experience, I’ve learned that the “paddles like a longboard, turns like a shortboard” idea is really just utter nonsense. I have tried countless boards that claimed to be the holy grail, claimed that I’d paddle with ease, duck dive everything, and link responsive turns together. The truth is, I was in denial. You can’t have the best of both worlds. Logically, for every step you take toward a shorter board, the more characteristics of a longboard that are lost and vice versa.

A few years ago, on a rainy, fall evening I decided to watch a documentary, simply called Fish. It was a documentary about the original fish shape from the ’60s and ’70s. In the film, this particular shape started its life as a kneeboard and evolved into a surfboard. I sat for two hours glued to my TV screen like a parishioner in church. I was completely sold. The surfing in the movie was so graceful and stylish. Most of all, it looked obtainable for my intermediate skill set as well as appearing fun and rewarding. The surfers in the movie were drawing neat and beautiful lines with speed and flow. It looked like longboarding but with quick and balletic like direction changes. They were putting their short, flat boards all over the wave. From that moment on, I decided that was how I wanted to surf for the rest of my life. The next day I got up and headed straight to my local surf shop and purchased a Lis-inspired fish, complete with twin keel fins.

Immediately, I proved my own point about intermediate surfers thinking we are better than we are. I paddled out on my brand new fish thinking I was going to dance around those waves like Rob Machado. Instead, I got to my feet on my first wave and felt like I was driving an old car on an ice rink. The tail slid around and I found myself surfing more like MC Hammer than Rob Machado. There is an art to riding a twin fin, I learned. You must surf on your rails and use each wave’s sections wisely, taking high lines for speed while staying low on the board. Riding a twin fin can humble you but also make you a better surfer. The board nags at you to understand the fundamentals of initiating and completing a turn. It took some time but as the months progressed, I fell in love with the board and the way it demanded to be surfed. I almost felt like I was cheating. I had finally found the holy grail and this was the most fun I’d ever had on a surfboard.

After two years of surfing that first twinny, I decided to order a new board. This time I worked with Simon Day, head shaper at Fitzroy Surfboards in England. I initially wanted another keel twin fin based on Steve Lis’ design. Simon had other ideas and sent me back a mockup of something a little more modern. It was a twin fin for sure, with a wide nose, flat rocker, and thick rails. But he’d added a cutaway and a deep, wide swallowtail. Combined with some XL Mark Richards fins, this board became the best board I have ever ridden. I’m now a firm believer that a twin fin is a must for every surfer. And to me, there is nothing better for an intermediate level surfer. Most of us are not surfing steep, barreling waves every day. We are more than likely taking what we are given at our local. Lately, I’ve seen an increase in twin fins in the lineup. The major shapers and brands have all caught on to the trend and are pumping out their own versions. Twinnies have been around for decades and everyone knows about them. However, I almost feel annoyed when I see so many in a lineup.

The selfish side of me knows that those other guys and girls are going to be able to catch more waves now, as if I had unlocked a secret code but now everybody else is enjoying it too. I almost wrote an article titled “Never Buy a Twin Fin” but in the end, I figured I should be honest. The truth is, twin fins changed my life.

Editor’s note: Learn more about the author and his new book, The Average Surfer’s Guide, here.