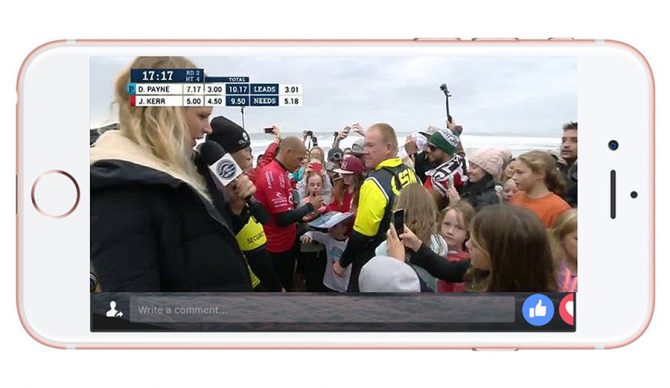 Keep those thumbs prepped and ready to give some heckling on poor heat scores from the judges this coming WSL season. Photo: Facebook / WSL.

The WSL and Facebook officially announced a collaboration Tuesday to live stream all major Championship Tour events and heats this year. With broadcast schedules mostly unpredictable, Facebook Live will now allow any users who follow the WSL to see it right away, live, on the top of their feed.

The lengthy process of getting to the actual event on a computer screen or monitor can take ages, so luckily we now have a more efficient way of watching the competitions during our real life schedules. The WSL says they wish to reach more of their fans for an “interactive experience,” but how much interaction do their broadcasts warrant? Better yet, how much interaction do they really want? Facebook comments can be tossed around like candy on Halloween. No filters or eyes to keep a close watch on what is appropriate and what is inappropriate during a live broadcast. With more than one billion people on Facebook, you’re likely to see engagement ranging from the hypercritical surf fans to the less-than-casual-fan who’s never even seen the ocean, having no idea what they’re watching (but still chiming in). There will be vulgarities. Wave scoring debates will fire up instantaneously. The possibilities are endless.

But thank you Facebook and the WSL anyway. Now I can creep on my ex-girlfriend’s Facebook page while watching a ‘CT event live, instead of opening two different tabs. Cheers to first world problems, right? Good luck to you, WSL. I hope this experiment doesn’t turn into a catastrophe full of hate and middle finger emojis.

Editor’s Note: The WSL kicks off the 2017 Championship Tour March 14-25 Along the Gold Coast of Australia with the Quicksilver Pro and Roxy Pro.