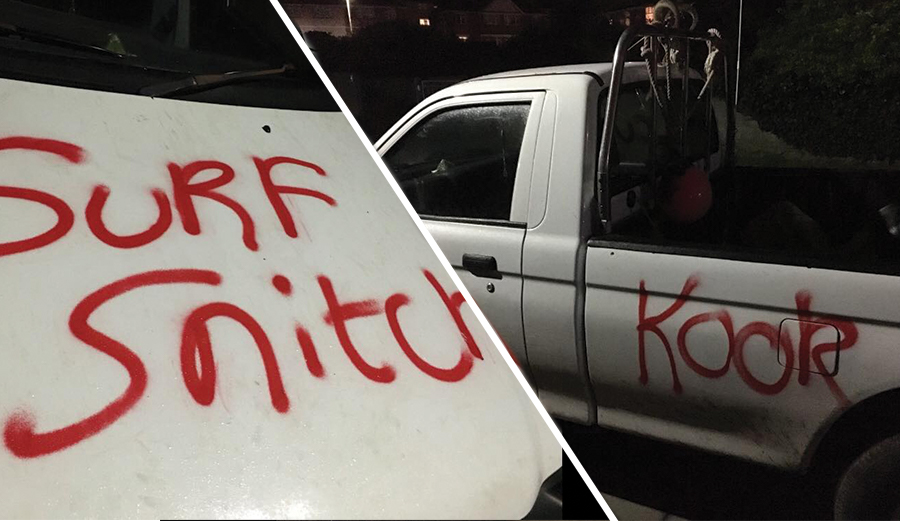 36-year-old Ben Landricombe’s truck was vandalized after he published photos of a secret spot in a local paper. Photo: Landricombe

A UK amateur photographer and surfer has received threatening messages and had his car defaced after the Plymouth Herald published photos he’d taken of a “secret” spot, enraging locals.

Later, Ben Landricombe, 36, told The Herald that after the images were published, he began receiving threatening messages online. “They said they were going to beat me up,” he said.

“Took us local surfers years of traveling around looking at surf spots at different tides and on different size swells for our advantage. Then one pic and it’s all over,” said Cohen Grayling.

“Now everybody will be down here…..thanks Herald,” said Dave C Jones.

On Tuesday, things escalated when the photographer’s property was defaced. Landricombe sent us images of his truck via Facebook – the words “Kook” and “Surf Snitch” scrawled across the side and hood in red spraypaint. Now, he regrets ever having taken the photos in the first place, showing the complexity and occasional ugliness of localism in surfing’s modern age.

“It was an accident and I just wanted to try to show some cool angles of the wave,” Landricombe told The Inertia. “I’m not a bad guy. I sort of wish I never took the shots, but a lesson learned. It’s gotten way out of hand. I’m a mellow surfer with good vibes and then you get these angry surfers who punch the water and scream when they make mistakes. The problem is that in the surf lately there’s far more anger than good so it’s making surfing a bit unpleasant. As Kelly Slater says, ‘The best surfers are the ones who are having the most fun. I’m going to hibernate now let it blow over.”