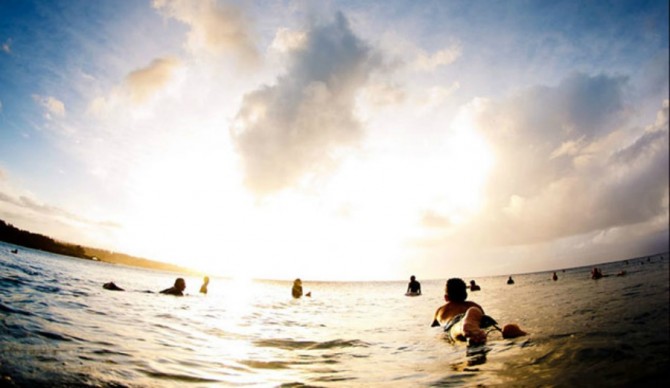 The world might be coming to an end, but ya gotta have faith. Photo: Quincy Dein.

If you are reading this article and visit this site it is likely because you have an interest or take pleasure in action sports. “Action sports” meaning everything from surfing and snowboarding to hiking and camping…anything that gets you outdoors and moving. These action sports carry an inherent respect and gratitude for the environment because, in a sense, it functions as our universal playground. Because of this, we have a responsibility to protect and preserve the planet to the best of our individual abilities.

This responsibility has the potential to fall to the wayside when there is a constant stream of news regarding large corporations destroying the environment for profit—often with little fear of legal repercussions. This makes it easy to fall into a state of indifference when considering how changes can be made on an individual level. We must combat this apathy.

Examining the environmental crisis from a macro-level can be disheartening, to say the least: A flight from New York to Europe or San Francisco breaks down to a carbon dioxide emission of about two or three tons per passenger. Now, multiply that by the amount of people on the flight and how many flights occur daily, weekly, monthly, yearly. Moreover, 30% of the world’s livable (ice-free) surface is used to raise livestock, mostly chicken, pigs, and cattle. In fact, an LA Times article concluded that a 1/3lb hamburger takes 660 gallons of water to produce. A whole pound takes 1,799 gallons. Most of us, especially in California, where citizens have been instructed to cut down their almond consumption, know how acute the water crisis is. Hybrid and electric cars, while emitting significantly less carbon dioxide relative to the standard car, carry their own sets of problems. Notably, the incredible amount of energy it takes to mine lithium for the batteries and then construct and ship the vehicles. Not to mention charging the 100,000,000 electric cars expected to be in circulation 20 years from now.

So, there it is. In only addressing a small portion of the problems it’s evident that humanity will run itself extinct in no time. Guess we are just shit out of luck, right? Wrong.

Philosopher and psychologist Erich Fromm argues in The Anatomy of Human Destructiveness that we must have “faith.” Not a religious faith, but rather a faith that “means to dare, to think the unthinkable, yet to act within the limits of the realistically possible…”

The pessimist argues that the best solution to the environmental crisis is for humans to become extinct. The optimistic blindly hopes for the best, pledging that “We always figure it out!” Not this time. We need to have faith. We need to take action, if not for others than for our individual morality.

Here are some ways to become part of the solution:

-Look to buy items with the “ENERGY STAR” symbol, which denotes sustainable products.

–Cars, especially in cities or suburbs lacking in public transit, can quickly become extravagance. Try making an effort to leave early and walk, skate, or bike to your destination.

–By food from local farms which practice sustainable and consciousness techniques.

Many of these solutions are not new, but the application of them is more pressing now than ever. Taking a short shower, changing light bulbs, and riding bikes may seem trivial in comparison to the actions of large companies or entire countries, for that matter, but if each of us makes an active effort, changes will be noticeable.

You do not need to stop taking flights or cut meat from your diet, but be aware of the impact your actions have. Minimize indulgences… if only to restitute your own morality.