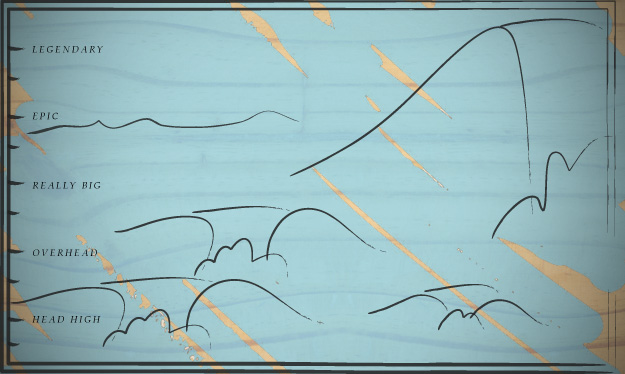 A man who says he rode a twenty-foot wave isn’t talking about surfing at all; he’s talking about himself – his loves, strengths, and fears. Illustration: Matt Bauer

My friend Oscar is one of the pre-eminent exaggerators of his time, especially when it comes to surfing. If you believe his stories, which are told with irreproachable candor, he: A) has never paddled out on a day when the wind was blowing onshore. B) regularly gets tubes so deep that they are best described as religious experiences. C) does airs whenever the mood strikes him, but usually as a safety measure to clear obstacles like forgotten mines or Great White Sharks. D) would be challenging Kelly Slater for competitive dominance were it not for his pesky back injury. And E) only paddles out (whether in New Jersey or Baja) when the waves are at least six-foot (Hawaiian). This brings us to the subject of wave height, one of the sport’s fundamental elements, yet a reliable wedge issue. Stories about waves make honest men liars, and the only places with more liars than a parking lot full of surfers talking story are at Wall Street firms and campsites by the Yellowstone River on the first day of fly-fishing season.

A few years ago I was living in Scotland when a photo of a surfer from Fraserborough riding a big left hit the local surfing message boards. The caption estimated the wave to be roughly twenty feet tall. In my opinion, whoever had written this had made two mistakes. First, he somehow failed to consider that his caption accompanied an actual photo of said wave. Second, he violated Mark Twain’s golden rule of fish tales, which clearly states: “Don’t tell fish stories where the people know you; but particularly, don’t tell them where they know the fish.”

By that point, I had seen and ridden many of the “fish” in Scotland, and to put it gently, twenty feet was an exaggeration. I decided to point this out quite vocally, using a combination of derision and disdain. When the horrific insults against my mother subsided, it was clear that was I was no longer welcome to surf in Fraserborough.

Although the Brochers, as the salty Doric men from that area of Scotland are called, eventually forgave me, I remained surprised that they had mistaken my doubt for personal insult. After all, no self-respecting surfer openly brags about wave height. Instead, he hints, shrugs, comments offhandedly, and leaves you to infer the rest. The understatement accomplishes what words cannot; it adds a few feet.

A few weeks ago, at a party in Brooklyn, New York, Oscar was telling surf tales to a group of non-surfers. They “Ooh’ed” and “Ahh’ed” along with his stories of tsunami-like swells and victory-at-sea exploits as I silently stood by gritting my teeth. Of course, it didn’t matter what a few people who could barely swim thought about his surfing (or my surfing), but it transported me back to the playground days when life revolved around proving your valor. We’d fight to the death to demonstrate our superiority. It was all play, but our worlds hinged on it. The size of the waves you ride doesn’t matter any more than who can spit the farthest, skip a stone the longest, sink the most baskets, punch the hardest, or run the fastest. Which is to say that it matters very little, but very much at the same time. After all, what are the lives of men but children’s games with higher stakes?

In many western cultures in the 21st century, machísmo has become a dirty word.  And when it’s used to rigidly define the roles of men and women in all its atavistic glory, it is.  But it’s also the same trait that squares the shoulders of the bullfighter and emboldens the foot of the racecar driver.  Would launch themselves over the cliffs of Maverick’s if not for lashings of machísmo surging through their veins?  Would the rest of us still be hooting for them if we didn’t have traces of the same, strange stuff trickling through ours?

Surfers measure themselves by the size of the waves they ride, or more accurately, the size of the waves they wipe out on. A man who says he rode a twenty-foot wave isn’t talking about surfing at all; he’s talking about himself – his loves, strengths, aspirations, dedications, and fears. In doubting him, you are not only calling him a liar, you are calling him a coward, too. A grave offense, indeed.

So I listened to Oscar embellish, and I restrained my snide comments because I know that when I’m the one adding the odd foot (or five) to that mystical, death-defying wave I surfed the other day, he’ll do the same for me.

One of the greatest essays ever written on big wave surfing is The Last Wave by Greg Noll, in which he recounts that one faithful day in Makaha when he road the wave of his life.  There are no photographs or video of that wave, just a few witnesses on shore and the man who lived it.  So how big was it?  Noll writes: “You could have stacked two eighteen-wheel semis on top of each other against the face of that wave and still have had room to ride it.”  I suspect that he is embellishing, but it remains one of my favorite descriptions of a wave that has ever been committed to print.

Without a simple, concrete image that we can judge for ourselves and with only Da Bull’s words to go on, the wave transcends the stolid realm of the quantifiable and becomes mythical.  When Noll pulls into is gaping maw, we see his entire life coalesce into a single, sublime moment of fear, courage, and spinning green water. By today’s super-sized big wave standards, he probably wouldn’t have even garnered an honorable mention at the Billabong XXL awards.  But that wave at Makaha is still, pound for pound, word for word, one of the greatest ever ridden

People will always be obsessed with documenting, measuring, and counting in an effort to distill surfing into some sort of science.  The wave was this height, the period this large, and the power enough to light such and such city for two weeks. But surfing isn’t about RBI’s or passing percentages, it’s about sublime moments of convergence.  For that reason, I hope that the stories of the embellishers and the liars will continue to be the lens through which we view ourselves.