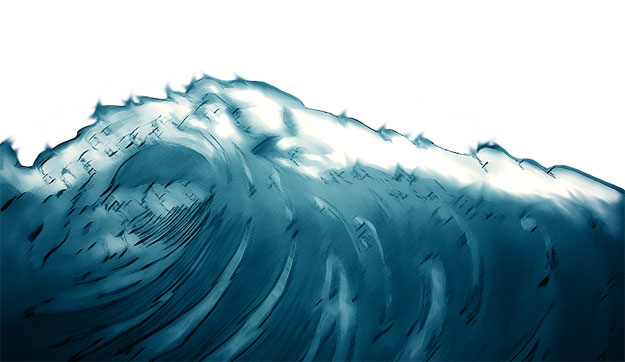 How big is this? 3 foot? 4 feet? Macking? Art: Alexander Haro

How macho are you when it comes to measuring wave size? Can you look at a macking ground swell and say with confidence: “That’s a definite three to four feet!”

The battle this article is written to address is basically lost anyway. It’s part now of the standard World Tour culture. “Three to four feet Hawaiian” is standard surf lingo along with cutbacks, hanging ten and 360’s.

But what a lot of macho, posturing rubbish!

Everyone knows the story The Emperor’s New Clothes. When that little boy honestly exclaimed, “The Emperor has got no clothes on!” he burst the bubble of hubris that had the Emperor and all his courtiers pretending they could see beautiful clothes because the ‘in’ guys, two classy, fashionable tailors, took his gold, sold him a line and fed his pride.

Problem: I have a son who surfs, as I do – and I live overlooking the beach. When we discuss wave size, as in, “Dad, is it worth me shooting back after school (he’s not a school kid, he teaches) or staying on and playing soccer? What are the waves like?” How do I answer? Measurement in feet no longer makes sense. Here’s the measurements I use: ‘Up to my knees’, ‘Up to your thighs’, ‘Waist high’, ‘Chest High’, ‘Shoulder high’, ‘Head high’, ‘Just overhead’, ‘About two feet over my head’ and so on. It rarely gets above eight feet where we live. And by eight feet, I don’t mean eight feet Hawaiian, or an eight-foot sloping face, or half the size of a house. I am six feet tall. I mean that if I dropped in and stood up straight, and I’d have to look up another two feet, to the top of the wave. And by wave I mean a linear movement of energy through the water, i.e a wave – I’m using basic English to communicate and using the basic meaning of words so that I’m understood… that’s what words are for. So ‘three’ means: Three. Three feet would therefore mean: (you guessed it) thirty-six inches from the base to the top – a thigh/waist high wave as you or I trimmed across the bottom of wall of water.

What happened? Something did, because three feet or four feet no longer means what it should in plain English.

Now when someone wants to emphasize how very big (very large, gigantic, huge, macking) a swell is they say, “Sixty foot faces.” They have to do this, and I’m being pedantic here, because being cool and calling it twenty foot Hawaiian doesn’t achieve the emphasis on SIZE. So to emphasize it we, as surfers, have ended up talking about the size of the sloping face, which I could almost defy anyone to truly accurately measure. And why? Because the simple measurement of height, ‘that wave is around thirty-five feet high’ (or eleven yards plus some) has been highjacked.

All surfers are tempted to be cool. “You should have been here an hour ago,” is a classic. Add, “It was six feet and glassy!” and you definitely got one up.

And who was the first guy to look at an overhead wave and casually say, “It’s four foot?” It’s one way to impress the impressionable.

I guess that’s it. That’s all it is. That’s where it comes from. Underestimate the size to sound cool.

Years ago, I remember the ‘cool’ guys defense to my argument: “I measure from the back, that’s how they/we do it in Hawaii.” This had the added chest puffing, intimidating, impressing effect of giving an impression that the speaker was at home, had been and was comfortable with Hawaiian waves. Cool!

That’s a lot of rot. Teahupoo waves have virtually no back whatsoever. Looking at one of the heaviest waves crunching over at double overhead and describing it as one foot six inches is laughable and gives the lie to the whole, ‘We measure from the back!’ Why? What for?

The King has got no clothes on. Six-foot waves are level with the top of a tall man’s head if he stands up straight after dropping in.

I said at the start of this article that this battle has already been lost. Maybe that means that the battle to stop surfers, (in general, but not everyone) from being an inveterate bunch of posers has also been lost too?

I’m pleased to be a surfer, but I am embarrassed at the way my culture measures waves, and at how self-perpetuating it’s become. From outside of our culture, let’s say someone stood on the beach for example, or your average sensible, confident man or woman, or the little boy who doesn’t know to say different, it sounds silly.