Alaïa Bay Will Bring Surfing to the Alps; What’s the Future Landscape of Surf Culture in Landlocked Nations? 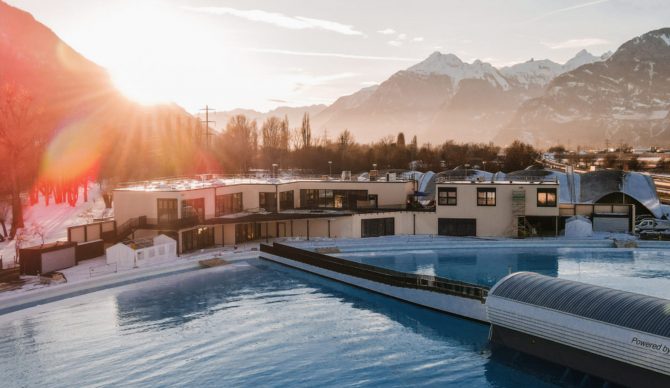 It’s quite a concept, surfing in the Swiss Alps. As we know, surf parks pop up around the globe constantly with the proliferation of manmade wave technology, and Switzerland’s Alaïa Bay facility, a Wavegarden product, is the newest concept set to open this year. But aside from dropping another wave pool in a landlocked location, it’s worth examining if the pool (wave) itself is as good as it’s made out to be and what the park’s facilities are bringing to the table. And to do that, we can look at the landscape of this unique location for a surf park and the unique story of how it came about.

The Alaïa Bay Founder, Adam Bonvin, has worked endlessly to ensure the experience is mindblowing for surfers. “The wave is more powerful than you think, and the facility has been embraced because it brings four seasons of activity to the area,” Bonvin says.

Switzerland is primarily a winter season attraction for its snow and ski resorts but being a surfer, the 25-year-old entrepreneur knew that he had to create a genuine experience for seasoned surfers as well as those who had never taken on the sport before. If the experience wasn’t going to blow people away, returns would be a challenge.

“There are excellent learning facilities and a great learn-to-surf school, but for those that want something more challenging, there is the Beast Mode, which will provide full-on slab barrels,” he says.

Set to open in Spring 2021, the park will kick off operations with surfers who have purchased the early passes and then it will run through the summer months, pumping out up to 1,000 waves per hour. Talking to people who have surfed Wavegarden Cove waves, like the Bristol Wave and the Urbnsurf Pool in Melbourne, Australia, surfers tend to share a similar sentiment: don’t underestimate the power. The wave is said to have some serious push. It might not be J-Bay or the Superbank, but these days, and in the middle of the Alps, everyone is just grateful to be surfing. Imagine how grateful any landlocked surfer would be to get slab barrels in the middle of Switzerland. And as with the Bristol wave and at Urbnsurf, one of the biggest attractions is that up to 12 people can paddle out at either the left or the right, and get a decent wave count in the 55-minute sessions.

Sion, the site of the pool, is actually one of the brightest and sunniest parts of Switzerland. The weather reaches the high 20s (80 F) in the summer months regularly and the past 10 years have seen a fair share of heatwaves during that time of year. It’s actually a counterintuitive thought to imagine surfers in boardshorts and bikinis with the Alps as a backdrop. But summer season isn’t actually that long in this part of the world with little else to do in a country that is dominated by winter sports and snow activities year-round. That’s part of what makes surfing here so enticing, adding it to the activities list alongside skateboarding and mountain biking.

While gearing up for the opening, the Alaïa Bay management opened up pre-opening ticket sales. These were completely sold out in just a few days. So it’s fair to say there’s a lot of excitement in this part of the world. While it might just be another Wavegarden Cove to everybody else (and many of us are bored with all the hoopla surrounding such developments), Switzerland has a bonafide home base for its national surfing team that competes regularly in the ISA World Surfing Games. In fact, Switzerland placed 23 out of more than 5o teams in the ISA World Games in 2019. The Swiss beat out teams from places like Fiji, Morocco, Puerto Rico, El Salvador, and plenty of other notable surf destinations — not a bad result for a nation without a coastline. After a few years of the national team training at a professional facility, what’s to say the Swiss surfing team won’t be on the rise?  Just saying.