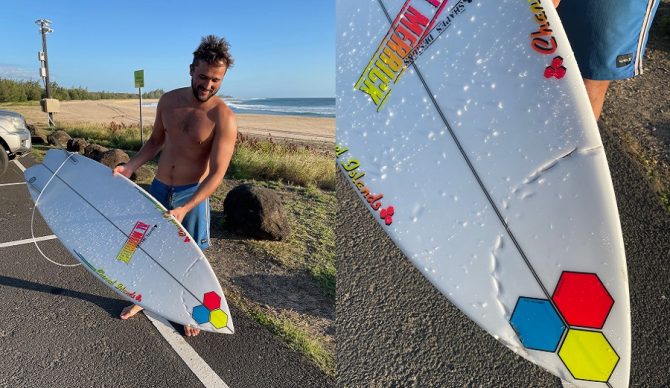 Well, I’m willing to bet you haven’t had as gnarly of a week as Gavin Klein. Last Saturday, he was out surfing on his home island of Kauai when a tiger shark decided his Channel Islands FishBeard was looking a little, well… fishy… and tried to take a bite out of it. Gavin made it out of the encounter with nothing but a minor scrape from the shark’s sandpapery hide, and his thoroughly bitten surfboard. Not only that, but news travelled fast through the CI family grapevine – Gavin’s uncle told Rochelle Ballard, who told Britt Merrick, who reached out to Gavin to send him a new FishBeard!

“I had been chased out of the water by a big shark on the North Shore last year, so I guess it just kinda struck me,” Britt told me when I reached out for a comment. “I texted with [Gavin] a bit just to see if he was okay and wish him well, and he seemed super cool and had a rad attitude. As I shared with the team at CI about it we just felt like it’d be an encouragement to him if we replaced his FishBeard. New boards are the best thing in the world and we wanted to bless him in some way after such a gnarly experience.”

When I asked Britt if my 7’0″ CI Mid came with shark insurance, he just laughed. “To answer your question, we have replaced a few shark-bit boards in the past, but no, it’s not in the warranty,” he said. “But if your story is good enough and your vibe is rad… you never know.”

I caught up with Gavin, whose story speaks for itself:

Tell us a bit about yourself?

I grew up surfing the west side of Kauai. I go surf up north or south occasionally, but not too often. My whole family has lived out here for a while, so I’ve been in the water my whole life, basically born and raised on the beaches on this side of the island.

And was that where you were surfing when this all happened?

Was that the same spot where Mike Coots had his shark encounter back in 1997?

Yeah, he lost his leg out here. I was really young when that happened, and I actually know Mike. Kauai’s a small island. I think he was like 18 or 19. One of my buddies who was there when Mike got bitten just called me to catch up, so it’s kind of crazy reconnecting there, but I haven’t talked to Mike about it yet.

Run us through what happened.

I actually had surfed there that morning with my family, and it was really fun, so I came back out at like 3:00 p.m. or 3:30, and there were two guys out. I paddled out and had a good surf for about an hour, and then those two guys left, and my uncle paddled out as well as this little grom. And we surfed probably another half an hour. So I think that puts us right around 4:30, almost 5:00. And my uncle Nelson, he was on a big board and I was on that little FishBeard, and the grom was on a tiny board too.

The grom caught a wave, and I paddled over it and sat up on my board to turn around, looking towards the beach to see if he made the wave. I then pushed forward on my board, moving to prone like transitioning to paddle, but I was still looking back and it felt like I hit a rock. So I turned around and looked and I just saw this grey head. I didn’t see any eyes. No fins. At the time I didn’t really know what was going on. But you know, when you’re in the water and you hit something with your board, you don’t really try to go against it, you kind of just flow with it, you know? You kind of let your board go ’cause you don’t want to damage it any more. So I loosened my grip and the next thing I know I was sliding over something. I brushed it with my hand and got a little cut, from the rough skin I guess, but mostly just ended up in the water. And I still had no idea what was going on, it all happened so fast.

But I grabbed my board really quick, just instinctively pulled it to me with my foot and the leash, and there was no resistance. I ended up on the board, which was upside down, and then I looked down and saw the massive bite. So that’s when I finally realized what was happening. And I pulled my feet and hands up out of the water and looked around for a split second but I didn’t see anything. The shark was just gone. I started screaming at the grom and my uncle to go in, but I just kind of sat you know, didn’t move for a second just looking around me, but I still didn’t see any shark. So I flipped the board back over and just worked my way back to the beach. 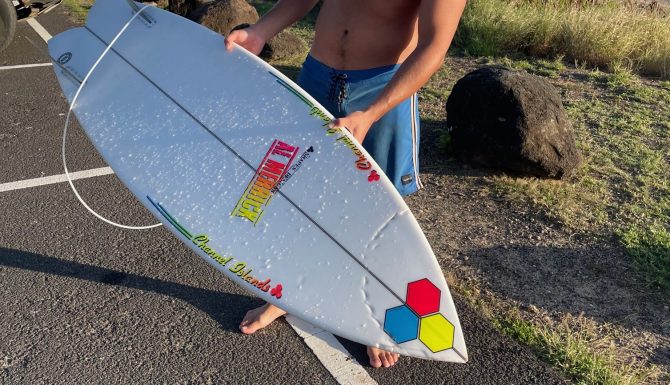 Better the board than you… Photo: Gavin Klein

Wow, literally touching a shark, and nothing but a little cut on your hand. And the busted board. That’s incredibly lucky.

Yeah, I feel just so lucky. As they are, shark encounters are never going to be a desirable thing. But if you had to have a shark encounter go one way… what’s the saying? It was the worst possible scenario, but the best possible outcome. Something like that.

So it was gone after that?

Completely gone. After I was off my board and in the water, I didn’t see it again. Like I said it all happened so fast. It hit the board, I fell into the water, and then it was gone. No time to really even be scared, you know?

Do you have any idea as to why that area has had so many shark encounters?

Yeah, growing up on the west side of Kauai I’ve surfed with a lot of sharks. More than I can count on both hands, you see them pretty consistently. There’s been a few actual encounters over there, and a couple at Davidson’s Beach which is really close to my house. And growing up just seeing sharks in the water while you’re surfing is really not uncommon. One thing I noticed was that there was a big turtle on the beach when we got out of the water that wasn’t there when we paddled out. A big honu [Hawaiian Green Sea Turtle]. So maybe the shark was chasing that guy around and found my board instead.

Have you have you gone surfing since?

Yeah, I surfed the next morning at a little beach break, and had a pretty fun surf.

So cool of Channel Islands. How did they pick that up and hear about what happened?

Usually, I don’t post much and didn’t post anything about the encounter. But word got around, my uncle took a photo, and he sent it to Rochelle Ballard. And she’s Channel Islands family. So I think she sent it to Britt and then all of a sudden, he was contacting me.

Wow! So you didn’t get bit, got to talk with Britt Merrick, and got a new board. Not bad. What are you gonna do with the old one?

I think it’s a wall hanger! Either at the house or maybe at a restaurant or something like that. 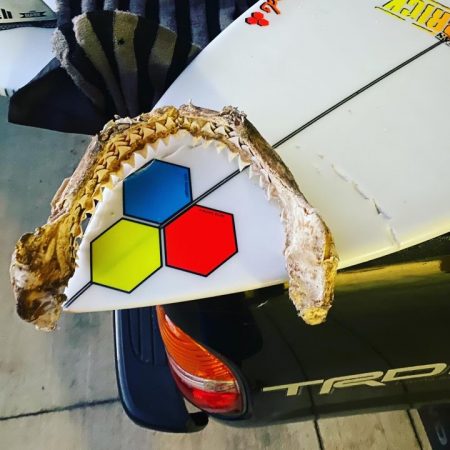 I really don’t know. The DLNR [Hawai’i Department of Land and Natural Resources] is gonna come today to measure it and take DNA samples and we’ll go from there. But I just don’t see how it could be anything else. it was close to shore, and it was a really big bite. The only other shark with a bite that big would be a white, but they only come here seasonally whereas the tiger sharks actually live around here.

What a crazy experience. Thank you for sharing, Gavin. We’re glad you’re safe.