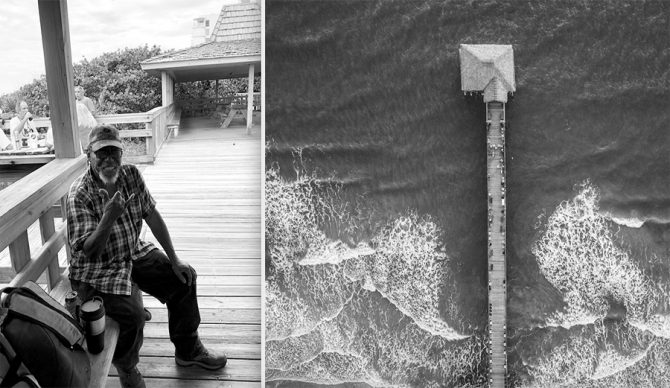 On Christmas night, a bomb exploded under the home of Brevard County residents Harry T. Moore and his wife Harriet. Harry died on the way to the hospital and Harriet died nine days later. They were singled out by the Ku Klux Klan for their efforts to register black voters and increase wages for black teachers. Moore is known as the first martyr of the civil rights movement.

This is the area where William Stallworth grew up. Will is a 70-year-old African American, who may have been Cocoa Beach, Florida’s first black surfer. He told me, when he learned to surf in 1968, he was “the only black guy out there.” Since then, the racial make-up of the lineups in Brevard County have changed little.

Will learned to surf just after graduating high school. He’d just landed a job at Kennedy Space Center working on the Apollo Program. To get from his home in Melbourne to the Space Center, Will had to drive through Cocoa Beach. On his way home from work he would play music in bars, which is where he met some of the area’s local surfers.

“Yeah because all the guys I knew, that had seen me play, were surfers. I think one of them… they might have got together as a joke and gave me a surfboard so they can laugh when I’m wiping out. (Laughs) But they was all my buddies,” he said.

He bought his first board, an 11-foot beauty from the old Surfboards Hawaii shop in Cocoa Beach.

“It was a pintail and that’s way before they made the straps for your ankle. Cause you go out right before a hurricane and stuff….and you wipeout… It took you 30-45 minutes to get out there because the waves are overhead and then when you wipeout you better know how to bodysurf,” he laughed.

He told me he surfed with local legends Fletcher and Che Sharpe, Mike Tabeling, Gary Propper, Dick Catri, and even David Nuuhiwa.

“I think it was 1969 when they first put surfing on the Wide World of Sports, when they first consider it as a sport. And David Nuuhiwa (had recently) won a championship and he ended up around here hanging out. Really nice guy. And then, uh, I’m trying to think what else… let me get one of those cold ones. Help me think a little bit. (Laughs)”

I frequently see him at the beach sipping from a brown paper bag, so I brought some beers.

“What board did you get after the Surfboards Hawaii board,” I asked

At the time, Will was working on the Apollo Program. In the rush to make it to the moon by the end of the decade, NASA began recruiting local area high school students. Will, being a talented draftsman and mechanic, was offered a job before he completed his senior year.

“I went to school at Stone. Back then it went from first through twelfth. It was still segregated,” he explained.

This was the late 1960s. Even though Brown v. Board occurred in 1954, it took another 10 years before desegregation began in Brevard County. In 1964, the county gave black students “freedom of choice” to attend white schools. Four years later the last all-black schools closed. It was Will’s final year of high school.

“I could have gone to Eau Gallie High or Mel High (white Schools) my senior year, but all my friends were at Stone…… But the drafting teacher from Eau Gallie would tutor me after school. Stone had a white principal and he talked to Mr. Holmes about tutoring some of us,” he explained.

“What did you do at the space center,” I prodded.

“If they needed a part changed, I’d go up and change it, but I had to make sure I documented everything by drawing whatever changes I made. It was dangerous up there too, you were 50 to a 100 feet up there trying to change out parts and document everything and you got hoses and wires everywhere.”

Some weekends NASA would tell its employees they were staying for the weekend. “I had a drafting board in front of me and one behind. The chair was pretty comfortable, and I would just prop my legs up on the desk and go to sleep.”

On his days off he would spend his time in the ocean – waves permitting. He particularly enjoyed surfing hurricane swells, even though he almost drowned when he lost his board surfing during one.

“I kept wiping out but I was catching my board,” he said. “But this one particular time I wiped out and I was tired and I was swimming in and then one of the guys out there saw I was tired so he paddled over to me, after he had caught a wave, and said ‘hold on to my board’ and he made sure I got in.”

“I don’t even have the slightest idea…. All the guys knew me because I was the only black guy out there. I might have been the first black surfer on the East Coast,” he said.

“How’d that feel, being the only black guy out there?” I asked

“It felt alright during the day until 6 o’clock in the evening and they [police] tell me I got to leave. And then the black cop would meet me on the other side of the bridge. He told them, ‘when you drop him off if he have a scratch on him you got to come through me.’ But all the cops weren’t like that. You know because there was a lot of them were like ‘Will, what’s the surf like,’” he laughed.

I asked if he had ever experienced any racism in the water. He told me there were a few guys that would get “mouthy,” but most of the guys had his back.

“Oh yeah. Whoever did that, they would let them know ‘That’s our friend. Pull it again you won’t surf here no more.’”

Then I asked him about the George Floyd murder.

“It’s fucked up, but it always have been going on,” he replied. “It’s just getting to the point everyone else is finding out about it. Back in the day if something happened… Who do you know that could help you? And if it’s your word against the police, the police are going to win every time.”

We had this conversation a little more than two weeks after George Floyd was murdered. Protests were happening all over the world, Minneapolis was on fire, and a pandemic was killing hundreds of thousands. All of which, of course, have devolved into partisan bickering. The world felt like it was falling down around us.